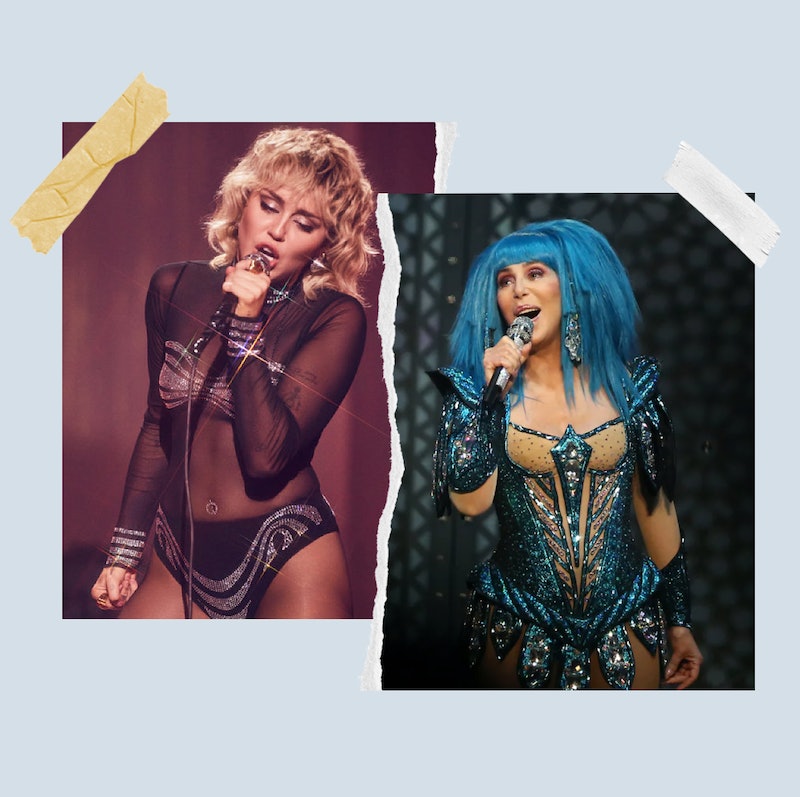 Miley Cyrus has been giving us jaw-dropping performances and covering her idols like Hole, Metallica, and Blondie for a while now, but her latest cover might just take the cake. The 28-year-old pop star just covered Cher’s “Believe” for her new Pride special Stand By You, attracting attention from legend, who was blown away by the live performance. “I’m not usually amazed, but ... I was beyond happy!!” Cher tweeted in all-caps after watching her rendition, adding, “Everyone in it is pure joy. Proud of Miley, she was perfect. Didn't expect to wake up this morning & see something that would put a big smile on my face. Costumes makeup, hair ... divine.”

In the performance, which was filmed in Nashville’s Ryman Auditorium, Cyrus puts her baritone vibrato to good use, emulating Cher’s singing style while also putting her own spin on the 1998 hit song. Adding to the very “Cher-esque” glitz and glamour of the performance were drag queens — including Kylie Sonique Love and Jaidynn Diore Fierce from RuPaul’s Drag Race — who joined Cyrus on stage for the choreographed number. After seeing Cher’s rave review, Cyrus was clearly ecstatic. In a retweet of Cher’s post, she wrote, “I just wanted to make you PROUD! Believe me! We worked hard on this number ALL FOR YOU! Our queen! Love you!”

Cyrus’ cover is part of an hour-long special that will air exclusively on NBC’s streaming platform Peacock. The special also promises that Cyrus will perform her hits “The Climb” and “Party in the USA” as well as additional covers of “True Colors,” “We Belong,” and “Dancing Queen.”

And if that’s not enough to make fans believe they should catch the special, Cyrus will also be doing a Madonna medley, including “Express Yourself” and “Like a Prayer.” The special also features Brothers Osborne, Mickey Guyton, Little Big Town, Maren Morris, and Orville Peck.

Miley is no stranger to devoting time to LGBTQ+ issues and activism. Through her Happy Hippie Foundation, she strives to “rally young people to fight injustice facing homeless youth, LGBTQ youth, and other vulnerable populations.” In the trailer for the live stream, Cyrus embodies her beliefs in a quick message to viewers, saying, “Tonight will be all about celebration. Everybody is welcome here.”