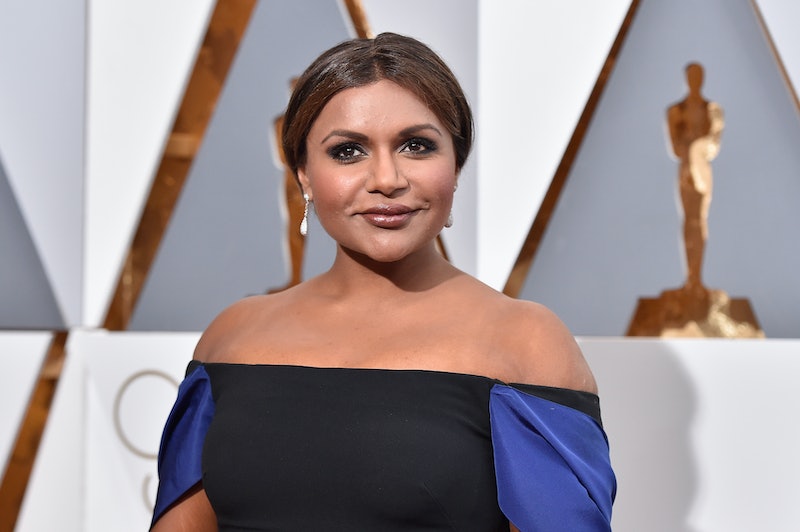 Instead of spending her quarantine baking endless loaves of sourdough, Mindy Kaling spent the past few months secretly preparing to welcome her second child. The actor and writer revealed that she welcomed a baby boy during an appearance on A Late Show with Stephen Colbert, and, though she didn't say too much, Kaling also revealed her new baby's name, which some fans think might be a nod to classic romantic comedies.

"I’m telling it for the first time now, it feels so strange. But I gave birth to a baby boy on September 3," Kaling revealed, before joking that her revelation was "news to a lot of people." The Never Have I Ever creator named her baby boy Spencer; she is already mother to 2-year-old Katherine, who she also welcomed after a relatively secret pregnancy in 2017. While Kaling didn't reveal the inspiration or meaning behind her son's name, several fans have pointed out that her children share the names of one of Hollywood's most iconic film couples: Katherine Hepburn and Spencer Tracy.

The pair starred in nine films together from 1942 until 1967, including now-legendary romantic comedies like Woman of the Year and Adam's Rib, and had an off-screen romance that lasted for nearly three decades. Kaling has long been open about her love of rom-coms and the influence that they've had on her own work over the years, so it wouldn't be surprising if the genre inspired her when it came to baby names as well.

Kaling did, however, open up about Katherine's reaction to her new baby brother, explaining that it took her a little while to warm up to the idea of having another child around. “She was very ambivalent at first, to be generous," Kaling revealed. "She was really worried about her toys getting taken. And so, that happened and I think in her mind, because she’s 2 and a half, almost 3, she thought that it would be another child that was her same size." Once Katherine finally met the new addition though, she was won over by baby Spencer for a very understandable reason: "She was delighted when he arrived home with me from the hospital and he was just a blob who couldn’t take her toys," Kaling said. "She’s a huge fan now that she’s met him."

During their conversation, Colbert also revealed that Kaling's best friend — and former on- and off-screen love interest — B.J. Novak is now godfather to both of the actor's children. "It's hard because the concept of a godfather is a Christian thing," Kaling said with a laugh while explaining that Novak doesn't fit the traditional mold of someone who helps guide a child's spiritual development. "He's Jewish, my children are Hindu — maybe he was the wrong person to pick, actually."

Despite the religious differences, it sounds like Novak is actually a very involved godfather; in May 2019, Kaling opened up about his role in Katherine's life during an interview with Good Housekeeping. "The truth is that B.J. is so much more like family now than a platonic friend," she explained at the time. "He's the godfather to my daughter, he comes over like once a week. Sometimes he'll come over just to hang out with her."

Though she acknowledged that their relationship is a little "strange," Kaling continued, "when you've known someone for as long as I've known him ... It's such a long time that he truly is just a part of my family." And after all of these years, she no longer thinks their dynamic is "weird as hell," as she described it in her 2011 memoir, Is Everyone Hanging Out Without Me? "Even that’s shifted," she explained. "He comes to Christmas and he’s just a member of the family now." Sounds like a true soup snake, right there.

More like this
'The Queen’s Gambit' Season 2 Tweet Wasn’t From Anya Taylor-Joy
By Mary Kate McGrath, Jack Irvin and Grace Wehniainen
Netflix Shut Down 'Bridgerton' S3 Rumours About A “Very Dark” Storyline
By Bustle
This 'One Tree Hill' Wardrobe Error Is Going Viral On TikTok
By Brad Witter
'RHOSLC’s Heather & Whitney Are Still On A “Friendship Break” After Season 3 Reunion
By Jake Viswanath
Get Even More From Bustle — Sign Up For The Newsletter
From hair trends to relationship advice, our daily newsletter has everything you need to sound like a person who’s on TikTok, even if you aren’t.