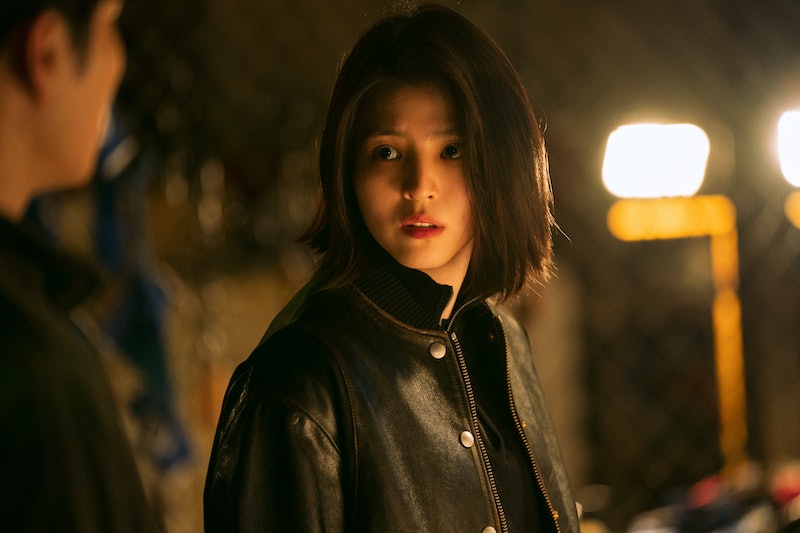 Following the mammoth success of Squid Game, another Korean drama has climbed to the top of Netflix’s most-watched shows: My Name, which debuted on Oct. 15 and stars Han So-hee as Yoon Ji-woo. Here’s everything to know about the arresting new show.

What Is My Name?

My Name is a gritty action series revolving around Yoon Ji-Woo, who sets out to take down Korea’s corrupt police force and a powerful drug ring after her gangster father is killed in front of her when she’s a teen. She infiltrates both the underworld organizations and law enforcement with one simple goal: find and kill the man responsible for her father’s death. It’s a tight wire act, and Ji-woo ultimately betrays both sides throughout her mission — as well as gets beat up quite a bit in the process.

The My Name Cast

To prepare for the role of Ji-woo, star Han So-hee put on muscle and learned how to fight. “When we started filming, I barely knew the ‘e’ in ‘exercise,’” she joked to Soompi. Han hadn’t been looking for an action-genre project specifically, but had “always wanted to do a script in which a female character led the project by herself.” She added that she experienced “big and small injuries” while filming and got cut up a few times. “But there were no big accidents” and any “cuts, scrapes, and bruises weren’t a big deal,” she said. “The stunt actors got just as cut up as I did, so I was able to move on.”

Acting alongside Han is Park Hee-soon as Choi Mu-jin, the boss of the drug ring Dongcheon. As the best friend of Ji-woo’s father, he trusts Ji-woo — but only to a certain degree. There’s also Ahn Bo-hyun as Jeon Pil-do, a police detective who becomes Ji-woo’s partner after she infiltrates the police force. Ahn previously starred in Her Private Life and Itaewon Class, two other popular K-dramas on Netflix.

Will There Be A My Name Season 2?

Though Ji-woo’s journey clearly resonated with viewers, My Name is unlikely to return for Season 2, since the story is pretty neatly resolved. At the end of Season 1, Ji-woo figures out who her father’s killer is and takes them out while managing to evade the police. If another season happens, it will have to be based on an entirely new plot line.

When asked what would happen to Ji-woo if there’s a Season 2, Han joked to Soompi that she thinks her character would simply die. She added that the writers may be able to build on the the late season reveal that her gangster father was actually a police officer, but suggested a new season would have to follow a different character. “I don’t know what [Ji-woo has] left to show,” she said. “I think I’d have to develop superpowers.”

As reported by Forbes, Korean dramas are typically designed to only be one season. “Followers of Korean dramas are accustomed to being able to finish a storyline without waiting,” K-drama fan Jean Libert told the outlet. “We expect some kind of conclusion and when it concludes, we generally don't expect a Season 2, but rather feel the satisfaction of closing the book on one story and going into the next.”

While Netflix is experimenting with this format, having a Korean drama go past one season still isn’t the norm. So fans will have to just be content with where My Name ends.