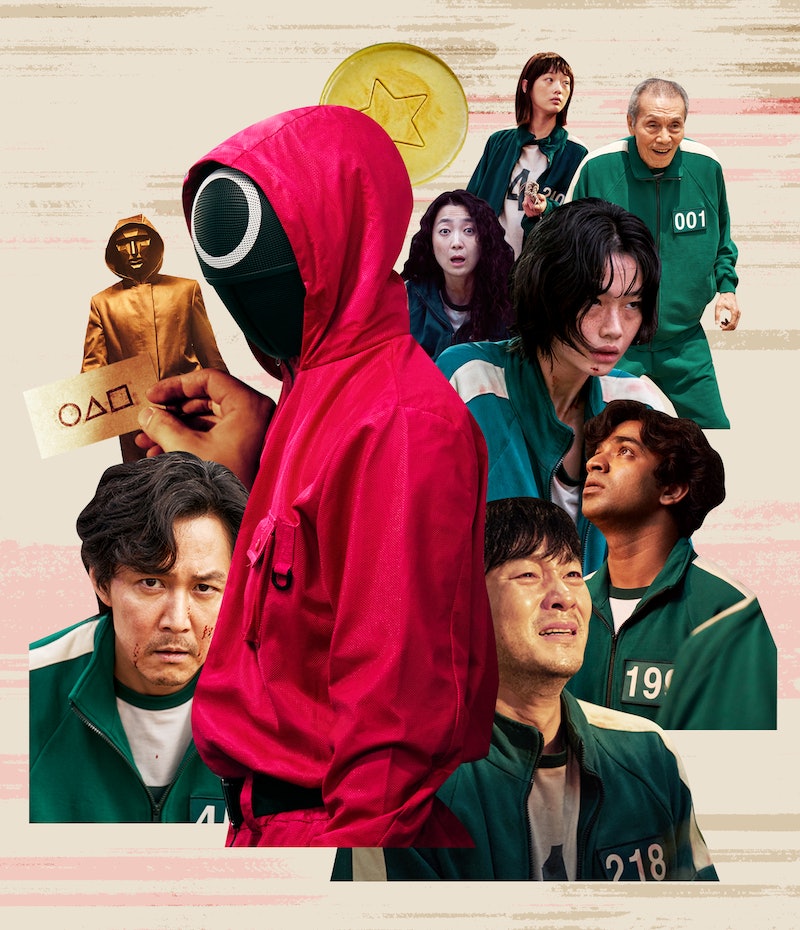 Squid Game is gruesomely violent and emotionally punishing. It’s also one of Netflix’s most popular shows. Since its premiere on Sept. 17, the South Korean thriller has become a global phenomenon: Its viewership has increased by 481% in less than a month, and the hashtag #SquidGame has been viewed more than 22.8 billion times on TikTok. It’s easy to see why: The series is superbly acted and visually striking, containing easily recognizable outfits and diabolical plot twists that make it ripe for endless theorizing and memes. But it also begs an uncomfortable question: Why are we so obsessed with a show about human suffering?

At its surface, Squid Game speaks to a long-standing fascination with the idea of gamifying survival. Dystopian movies like The Hunger Games and Maze Runner pit kids against each other in battle arenas. Horror films like Ready or Not, Saw, and Battle Royale follow protagonists who must survive a gauntlet of terror. Even middle school readings center around the theme: Lord of the Flies leaves a group of teen boys to rescript the rules of society on an abandoned island; in the 1924 short story The Most Dangerous Game, a bored Russian aristocrat hunts a man for fun.

A drama inspired by South Korean history and politics, Squid Game follows Seong Gi-hun and 455 other debt-ridden participants who are whisked away to an island to play six rounds of basic children’s games. If they survive, they win 45.6 billion won (about $38 million). If they lose, they die in terrifying and inhumane ways — all while a group of billionaires watch for their own voyeuristic pleasure. It’s a clear commentary on how crushing economic inequality and financial instability can be for lower-income people — issues that only have been exacerbated by the global pandemic. Particularly against the backdrop of the last 18 months, “People can identify with feeling like they’re not the ruling class, but the underdog or the downtrodden,” Dr. Eric Bender, a child, adolescent, adult, and forensic psychiatrist tells Bustle.

Grace Jung, a UCLA scholar with a PhD in Cinema and Media Studies, explains that the promised payoff for investments of time and money — from school loans to unpaid internships to mortgages — never comes for lower-income people under a capitalist system. “That is the big resonance [of Squid Game],” Jung says. “Debt makes everybody feel vulnerable and anxious and desperate.”

Desperation, indeed, is what drives Squid Game’s participants to compete. Although they’re given the option to leave the game at the beginning of the show, they all ultimately return, realizing that scraping by in the real world with no viable way to escape poverty is possibly worse than risking death for a life-altering prize. From this perspective, the brutality is almost beside the point — although there likely are some people who do watch for the gore. “The violence really puts an exclamation mark on the human struggle elements,” says Dr. Praveen Kambam, a child, adolescent, and forensic psychiatrist. “[It] shows just how far these people are willing to go ... They would rather endure this level of violence, or chance of violence, than deal with the system outside of the game.”

“Debt makes everybody feel vulnerable and anxious and desperate.”

This social commentary speaks to us on a deep level, but the games’ horrific format also adds to Squid Game’s allure. Contrasting the innocence of childhood games against the knowledge that something sadistic is about to happen creates a cognitive dissonance that “amplifies the horror and sense of powerlessness” we feel while watching, says Dr. Pamela Rutledge, a media psychologist.

Bender adds that when he sees kids in therapy, it’s apparent that they’re “not in control of their lives.” So when you have adults forced to play children’s games, it’s like the tables are turned and “suddenly they’re the children not in control.” This makes Squid Game heart-pounding and devilishly effective: Just as viewers were horrified to learn that The Hunger Games offers up children as tributes, so too does Squid Game work to constantly disarm us — a reflection of what the characters themselves are feeling.

The premise also picks at an age-old discomfort. “What’s subtle and insidious is that children’s games are kind of cruel in and of themselves,” Bender says. “There’s someone left out, someone has no seat when the music stops, somebody is made to feel like they didn’t do a good enough job.” Squid Game captures that agonizing feeling and plays off of it in increasingly clever ways. What is the playground, the show asks, if not a microcosm of the cutthroat business world under capitalism?

As Squid Game progresses, the moral dilemmas the characters face grow increasingly intractable, and the show forces us to look inward and question how we would react in similarly distressing situations. In social psychology, people tend to “overestimate the moral choice” they would make and “underestimate the influence of group dynamics and compliance,” Kambam says. None of us want to believe that we’d side with the bully or act only in self-preservation. But shows like Squid Game ask us to second-guess ourselves, and “that is [both] scary and exciting on an unconscious level,” Kambam adds.

What is the playground, the show asks, if not a microcosm of the cutthroat business world?

Part of Squid Game’s appeal is born from hope: Seeing contestants survive, as well as surviving the grueling test that is watching the show, can make our own struggles seem possible to overcome, according to Rutledge. But there is also a twisted complicity that ratchets up the intrigue. For centuries, humans have delighted in watching people confront difficult situations, most notably in the ancient gladiator games that began in the late first century BC. Gladiators were usually criminals, slaves, or prisoners of war who gave up what little legal protection they had for the chance to make money. Putting them in a public duel to the death entertained the masses while also ensuring power remained in the hands of the rulers at the top.

We see that dynamic in Squid Game between the VIPs and competitors, but on a more meta level, it speaks to us as audience members as well. Watching onscreen is “a ‘safe’ way of sharing the risky adrenaline rush of the participants,” Kambam says. While the VIPs watch Gi-hun and the participants, we watch them all from our own little glass boxes at home.