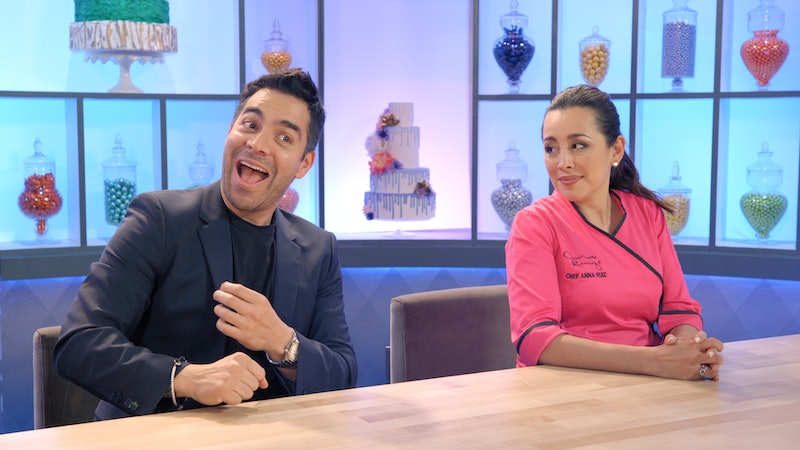 If you've just marathoned your way through the new season of Nailed It! Mexico and are already craving more episodes, there's some good and bad news. The bad? Netflix hasn't yet announced if the show will return for Season 4. The good? It seems likely that host Omar Chaparro, head judge Anna Ruiz, and more questionable home bakers will be back on your screen at some point, considering that Netflix has only continued to expand the Nailed It! franchise. In addition to the Mexican version, Netflix began airing Nailed It! Holiday in 2018 before announcing international versions of the series in France, Germany, and Spain.

As for when viewers can expect to see another potential Nailed It! Mexico installment, Season 2 dropped about six months after the show's premiere. Season 3's Jan. 5 release cut down the break between seasons to just five months, so they don't seem to be following any specific time frame. But fans can likely plan for another season around mid-2021, depending on how the ongoing coronavirus pandemic affects filming.

In the meantime, fans can look forward to Season 5 of the original Nailed It! series. Though Netflix hasn't officially confirmed a fifth season, an April 2020 casting call said that filming for the next batch of episodes was scheduled to take place between May 1 and July 31. So depending on how production panned out with COVID restrictions, the next English-language season could be right around the corner.

More like this
Netflix's 'Bling Empire' Season 3 Trailer Includes A 'Selling Sunset' Cameo
By Kadin Burnett and Sam Ramsden
‘The Ultimatum: Queer Love’ Is Officially On The Way
By Radhika Menon and Kadin Burnett
Andrew Gray Returned To 'Bling Empire' In Season 3 To Make Amends
By Brad Witter
The 'Love Is Blind' Season 3 Teaser & Release Date Are Here & The Cast Is "All In"
By Kadin Burnett, Grace Wehniainen and Gabrielle Bondi
Get Even More From Bustle — Sign Up For The Newsletter