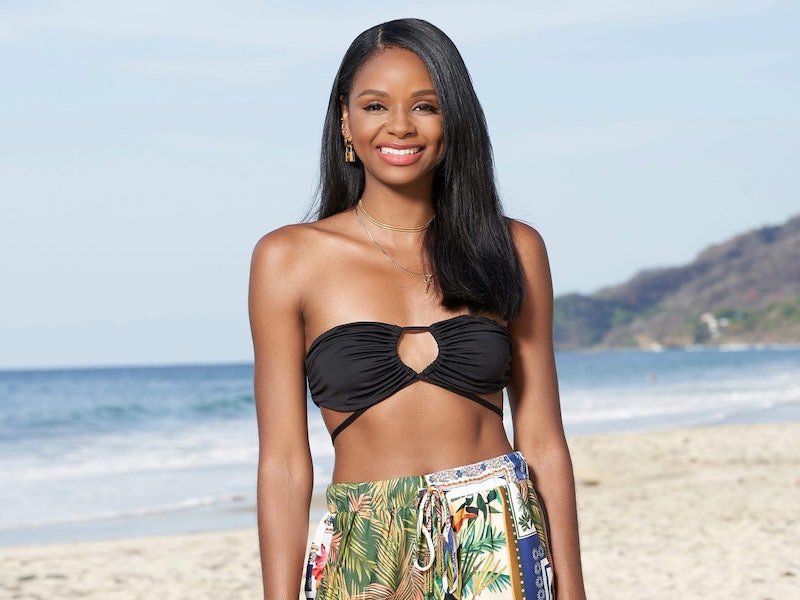 After nearly two years on hiatus, Bachelor in Paradise’s Aug. 16 return promises to deliver a summer packed with romance, drama, and more than a little tropical humidity. It’s the perfect cocktail for televised conflict, as the show’s trailer has already teased. But if Bachelor producers, who have been known to “guide” the drama from time to time, do some meddling on the beach this summer, Natasha Parker will likely be impervious to their tricks thanks to her own experience in the industry. Here’s everything to know about her ahead of Paradise.

Natasha first made her debut in Bachelor Nation in 2020 on Peter Weber’s season of The Bachelor. The then-31-year-old’s job was listed as an “event planner,” which doesn’t seem to be the case anymore, at least according to her personal website. Natasha’s bio on her website describes her as a television producer and marketing director who had a long stint working for HBO. During her time with the network “she was responsible for all behind the scenes footage, talent interviews, and any logistics involved to produce marketing campaign shoots” for shows like ​​Insecure, Succession, 2 Dope Queens, Sesame Street, and The Deuce. She’s also worked production jobs for the NBA All-Star Game, the NHL Winter Classic, BET, MTV: Unplugged, Warner Bros., and CBS. Her history in production likely gives her an edge when it comes to any dramatics that might be drummed up by Paradise producers; an understanding of what goes on behind the scenes always helps when you’re in front of the camera.

What Happened To Natasha On The Bachelor?

Natasha made it all the way to the top six on Peter’s season of The Bachelor. Peter sent Natasha home on their first one-on-one in Peru after explaining that their relationship hadn’t progressed enough to continue. Since her time on the show, Natasha joined the official Bachelor Nation podcast Click Bait alongside fellow franchise favorites Tayshia Adams and Joe Amabile, where they break down celebrity news and interview other members of Bachelor Nation.

The podcast has also been a venue for Natasha to discuss her journey on Peter’s season and examine why she was reluctant to express herself during her time on the show. “I’ve done that in so many other relationships in hindsight,” she said. “I was like, this is a trend for me... so that was a healing moment for me.” She’s also used Click Bait to talk about beauty standards for Black women, specifically Black women contestants on The Bachelor following Chealsea Vaughn’s appearance on Matt’s season, saying, “There are these stigmas that people don’t even understand or get, that are placed on people of color.”

Both Natasha’s Instagram and her website tout her experience with yoga and meditation. According to her website, Natasha has her yoga teacher certification and teaches guided meditation and zen practices to clients. Her yoga skills are prominent across her Instagram, where she shows off her flexibility, strength and balance. She never hesitates to display her contortion skills with captions that include “Breathe. Expand. Take up space. You have a place in this world and don’t you forget it.” Her mindfulness even extends to her upcoming appearance on Paradise, albeit in a comedic fashion, as evidenced by a promotional picture of her on the beach with the caption “Beach don’t kill my vibe.”

Does Natasha Find Love In Paradise?

Since appearing on Peter’s season, Natasha has remained close with some of her cast mates. Her social media includes photos of her in Nashville with fellow 2020 contestants Victoria Fuller and Lexi Buchanan. It appears that Natasha has remained involved with Bachelor Nation, which means she could already have her eye on someone when she arrives on the beach. Natasha makes a couple of appearances in the Season 7 Paradise trailer, most notably licking her lips upon the arrival of a yet unknown contestant. Later in the trailer she’s seen fanning herself and saying, “I have like, all the feels.” She even parades in front of some fellow cast members in her bathing suit, obscured by a black box, indicating that Natasha gets into the sultry spirit of Paradise. How she’ll fare this season however, still remains a mystery.