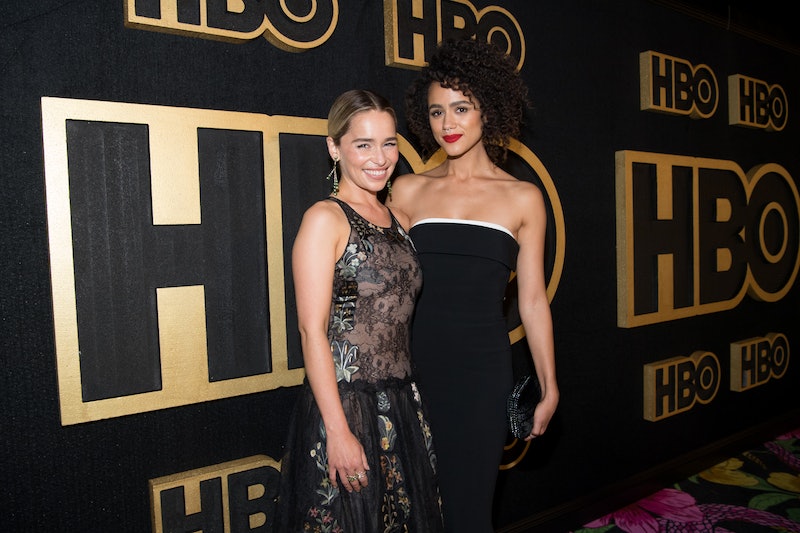 They say that life imitates art, and in the case of Daenerys and Missandei, that certainly seems to hold true. In a recent interview with British Vogue, Nathalie Emmanuel revealed Emilia Clarke defended her from sexist comments on Game of Thrones while reflecting on her experiences working on the HBO fantasy saga. According to Emmanuel, the incident occurred during the filming of Season 3, when a male costar made a joke about the "revealing" costume that she had to wear as Missandei, Dany's translator turned closest confidante.

"In my first season, my costume was pretty revealing and there was an incident with a supporting actor who made a comment about it on set," she recalled. "I mean, typical — and Emilia straightaway had my back. It got handled." While Emmanuel noted that she and Clarke "got on like a house on fire" right away, the actor explained that she felt the "male-dominated" atmosphere of Game of Thrones helped bring the two women even closer together.

"When I joined the cast, she had already been shooting Game of Thrones for a few years, and she was definitely ready to have some female energy around her. She and I always looked out for each other," Emmanuel explained. "If you’re the only girls on a male-dominated set, it bonds you in a certain way."

Of course, Emmanuel wasn't just one of a few select women on GoT, she was also one of the only actors of color on the series. In May 2019, she told Entertainment Weekly that her character's death in Season 8 of Game of Thrones highlighted the show's lack of diversity. "I am fully aware and engaged in the conversation of representation because I am the only woman of color in this show that has been on there regularly for many seasons," Emmanuel explained, shortly after Missandei was killed off in one of the show's final episodes. "It’s safe to say that Game of Thrones has been under criticism for their lack of representation and the truth of it is that Missandei and Grey Worm (Jacob Anderson) have represented so many people because there’s only two of them."

In a recent interview with Harper's Bazaar, Emmanuel said that she hopes speaking out about those inequalities in the entertainment industry will help inspire change. "I’m used to just being on sets that are mostly white. And then I’m probably one of maybe two or three — which is rarer — people of color," she explained.

"There’s so much untapped talent that’s not being utilized. And I think that’s just such a shame," she explained. "We need to actively hire Black people and other people of color into the industry in every single way. And hopefully then we will see actually long-lasting change."