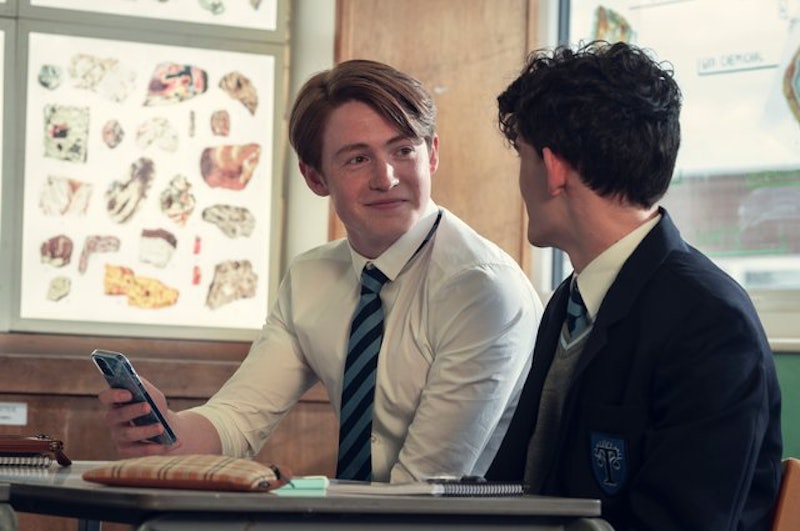 Kit Connor’s star is on the rise thanks to his lead role in Netflix’s hit teen drama Heartstopper, which champions a love story between two teenage boys. The hit series is based on the webcomic of the same name by Alice Oseman. Connor plays Nick Nelson, who develops feelings for Charlie Spring (portrayed by Joe Locke). And in a surprising twist for viewers, Olivia Colman features in Heartstopper as Nick’s mum, Sarah. As it happens, Connor has quite the impressive acting resume of his own. Find out everything you need to know, below.

The 18-year-old actor grew up in Croydon, South London. Aged ten, he appeared in the Get Santa film, and went on to make appearances in Mr. Holmes, Ready Player One, Slaughterhouse Rulez, and more. He also enjoyed small roles in respected TV dramas such as War & Peace and Grantchester. However, his big break came in 2019, when he played a young Elton John in Rocketman: the award-winning biographical drama based on the singer’s life.

He also voices Pantalaimon, better known as “Pan”, Lyra Silvertongue’s spirit animal in His Dark Materials. According to RadioTimes — who dubbed Heartstopper “the most important British show since It’s A Sin” — Connor initially auditioned for the role of his on-screen love interest, Charlie Spring.

Kit Connor’s Instagram documents his acting journey, from throwbacks to his child roles, to shots of red carpet events, magazine covers, and trailers of his most recent features. You can follow him at @kit.connor on Instagram and @kit_connor on Twitter.

In a recent interview with 1883 Magazine, Connor spoke about the heightened attention that comes from starring in a hit series. He remarked: “Being a lead in a Netflix show comes with its own level of insanity... I’m really enjoying it. Doing interviews and such has been a real pleasure because the cast loves to talk about how much we love the show.”