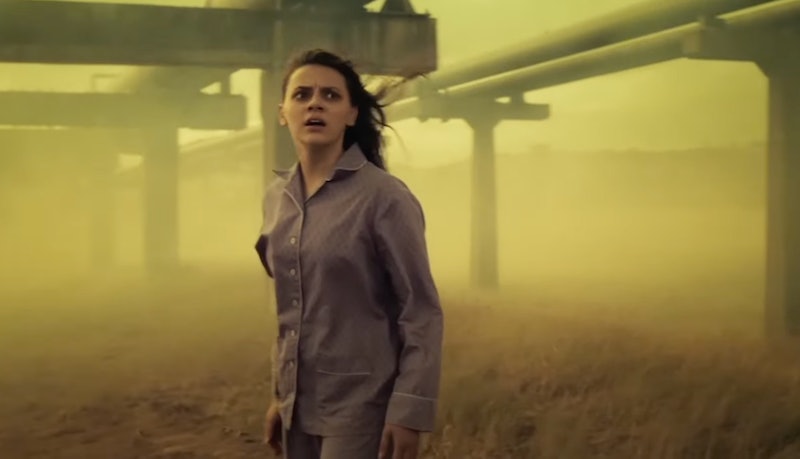 Heartstopper’s Kit Connor remains as the voice of Pantalaimon. As do David Suchet, Joe Tandberg, Sope Dirisu, and Lindsay Dunca, as the voices of Kaisa, Iorek Byrnison, Sergi, and Octavia.

Fans will be pleased to know that McAvoy’s character will likely feature more in the new season, following his brief cameo in Season 2.

The upcoming eight-part series will be based on Pullman’s third book in the His Dark Materials’ trilogy, The Amber Spyglass, and will see “multiple new worlds including the Land of the Dead”, “returning characters” and “strange new creatures, the Mulefa and Gallivespians.”

It’s a complex plot, however as BBC succinctly writes, “The new series will see Will (Amir Wilson), the bearer of The Subtle Knife, and Lyra (Dafne Keen), the prophesied child, travel through multiple worlds to find and protect each other.”

At the BFI & Radio Times Television Festival, on bringing the Mulefa creatures to life, VFX supervisor Russell Dodgson said: “They're like kind of a giant trunked horse animal that has a diamond-shaped skeleton”. Adding, "It’s going fine. It's a cool challenge, and we'll disappoint some people and make some other people really happy, I guess."

Die-hard fans may remember at the end of season two Lord Asriel (played by James McAvoy) call upon the angels to help him wage a war against the Kingdom of Heaven, as Mrs Coulter (played by Ruth Wilson) abducted her daughter Lyra to take her to ‘safety’ in their own world.

Ahead of series three, McAvoy dropped hints at some thrilling fight scenes to come, telling BBC’s The One Show, via Radio Times, “What can I tell you? It’s war.”

He added: “At the end of the second season, we sort of declare war on the Kingdom of Heaven, so yeah, it gets pretty down and dirty, and there’s gonna be a lot of fisticuffs and a lot of explosions and all that stuff.

“But at its heart, it’s about a wee girl and a wee boy… and not the adults with the egos.”

Viewers will also get to know Mrs Coulter’s family in the upcoming season, details which aren’t included in the His Dark Materials trilogy originals, but S3 writers appear to have pulled some elements of Pullman’s 2019 The Secret Commonwealth novel to bring to life Mrs Coulter’s mother, Madame Delamare.

“We actually have some sort of outfits that are her mother’s, that are sent to Mrs Coulter. In my head, [she’s] linked up to the Magisterium, the Church,” actress Ruth Wilson told BFI & Radio Times Television Festival crowds.

“Mrs Coulter’s mother was very much part of the Church. So that actually represents, for her, rules and patriarchy. And I think that Mrs Coulter was always a disappointment to her mother in that way.” She added: “You’ll see that my reaction to those outfits is not necessarily very nice. Being reminded of my mother again, and her power and her influence.”

Season 3 will premiere on Sunday, Dec. 18 on BBC One. It will air weekly on the channel, with all episodes made available on BBC iPlayer following the TV premiere.

The BBC has now shared an extended look of the series to come, featuring McAvoy's Lord Asriel with a new slicked-back hairdo, the Magisterium directing Ward’s Father Gomez to find Lyra “dead or alive,” and Lyra and Will’s death-defying journey. The trailer also sees the return of Gedmintas’ Serafina Pekkala, asking “if the prophecy is true, she will achieve something far beyond your rebellion.”

More like this
Everything To Know About The 'Daisy Jones & The Six' TV Series
By Maxine Harrison and Brad Witter
Alan Carr's 'Changing Ends' Is A Witty Sitcom Based On His Own Life
By Darshita Goyal
Twitter Is Burning As Phoebe Dynevor Reveals Daphne’s 'Bridgerton' Exit
By Sophie McEvoy
Olivia Colman Stars In First-Look Trailer For BBC's 'Great Expectations'
By Sabah Hussain and Sam Ramsden
Get The Very Best Of Bustle/UK
Sign up for Bustle UK's twice-weekly newsletter, featuring the latest must-watch TV, moving personal stories, and expert advice on the hottest viral buys.

This article was originally published on Dec. 31, 2021