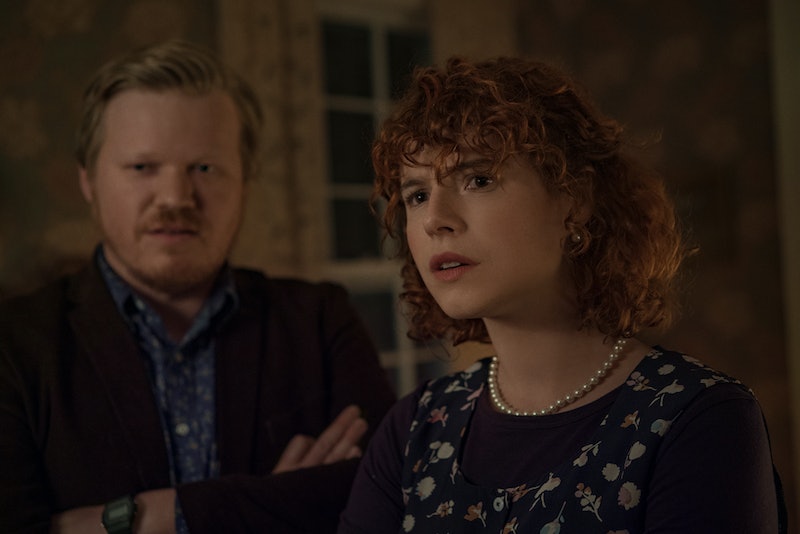 Charlie Kaufman is not known for the straightforwardness of his writing. The screenwriter behind such puzzling and mind bending films as Eternal Sunshine of the Spotless Mind, Adaptation, and Being John Malkovich has a new Netflix film called I'm Thinking of Ending Things — and the I'm Thinking of Ending Things ending shows the movie is bound to be his most debated and confusing work yet. "The only way to describe it is it feels like you've been painting portraits your whole life and then someone gives you the opportunity to paint abstract or surreal," the film's star Jessie Buckley tells Bustle. "When I watch it now it's still shifting for me all the time. I don't have any finite answers, I just have questions. I think the whole process [of making it] for me was a series of questions." It's a sentiment Buckley's co-star Toni Collette also shared. "[The script] was unlike anything else I've ever read," she tells Bustle. "But when you let go and you surrender [to the story] a type of magic does happen."

Unlike most of Kaufman's previous films, I'm Thinking of Ending Things is not a wholly original work. Kaufman adapted the film from the 2016 novel of the same name by Canadian author Iain Reid. Despite having a blueprint to work from, however, Kaufman still manages to craft a film that's even more bizarre than its admittedly bizarre inspiration; especially when it comes to the ending.

Spoilers for both the book and film versions of I'm Thinking of Ending Things to follow.

The plot of the film goes, roughly, like this. The main protagonist is an unnamed young woman (who may or may not be named Lucy) played by Jessie Buckley. At the start, she is about to embark on a road trip with her boyfriend of a month and a half, Jake (Jesse Plemons). She has a running inner monologue where she talks about wanting to end things with Jake. Jake picks her up and they begin their journey in a snowstorm. They are off to the country to see Jake's parents at the secluded farmhouse where he grew up. It will be her first time meeting them, and she is regretful that she had agreed to go along on the trip. After all, she is thinking of ending things with Jake. Very early on, it becomes clear that something strange is going on with the two of them. Jake sometimes seems able to hear his girlfriend's thoughts, while she sees inexplicable things out the car window. They both speak at length about seemingly random subjects — like Jake displaying his knowledge of stage musicals, specifically Oklahoma! — and sound more like philosophers than a young couple enjoying casual banter. There are also unexplained scenes of an elderly janitor (Guy Boyd) going about his day that occasionally offer a break in the action. These occur intermittently throughout the film.

Eventually, the woman and Jake make it to Jake's parents' house where things go from weird to "this is the weirdest movie you'll ever see." Almost nothing at the farmhouse makes sense. There is a dog who begins shaking off his wet fur and then doesn't stop shaking for an inordinate amount of time. The woman sees a picture of herself as a child in the house, and Jake tells her it's a picture of him. Jake tries to keep her from seeing the basement, and when she eventually ventures down there, she discovers a washing machine full of school janitor uniforms. She can't seem to recall details about her own life, like what she does for work or how she and Jake met. Jake displays increasingly aggressive and erratic behavior. And, strangest of all, Jake's parents are constantly shifting in age. One minute his mother (Toni Collette) is young and dressed like it's the 1950s, picking up children's toys around the house. The next, she is quite elderly and on her deathbed. Eventually, she actually dies, only for Jake's father (David Thewlis) — previously seen as quite old and feeble — to enter the room as a dark-haired and vibrant middle-aged man. Throughout it all, the elderly janitor continues to show up in isolated scenes seemingly unrelated from the other characters.

Eventually, Jake and "Lucy" leave the farmhouse to head home. Their drive through the continually-worsening blizzard is tense, argumentative, and above all, confusing. At one point, the woman goes into a lengthy, editorialized review of the film A Woman Under the Influence. After stopping to get ice cream at a roadside stand (during a blizzard, in the middle of the night), Jake takes the woman to his old high school. They park, they argue about the song "Baby, It's Cold Outside," and they begin to makeout. They stop when Jake believes he sees someone spying on them — the janitor. Angry, Jake exits the vehicle to confront him. After a period of time, the woman follows him into the school, where she instead finds the elderly janitor roaming the halls. She talks with him about Jake, where she reveals that she doesn't actually know Jake, has never dated him, and never even interacted with him outside of noticing him staring at her at a bar once. She then goes looking for Jake, and eventually finds him. Without speaking, the two of them then witness two younger actors, playing themselves, perform an interpretive dance. During the dance, the actors are married, but their happiness is short-lived as they are joined by an antagonistic third actor portraying the janitor. He steals the woman and eventually stage-murders actor-Jake at the conclusion of the play. The real woman and Jake stand over actor-Jake's body and then silently go their separate ways. The janitor cleans up, goes out to his truck, strips off all his clothes, and hallucinates a cartoon pig through his windshield. He follows the pig back into the school as it spouts nihilistic philosophy at him. The scene then cuts to a Nobel Prize ceremony where Jake, wearing what can only be described as purposely-unconvincing old person makeup, accepts his award in front of a crowd doused in similarly bad makeup. He then sings the song "Lonely Room" from Oklahoma! as the crowd, including an elderly makeup-wearing "Lucy," looks on. The song ends, and the scene fades out to show Jake's now-snow-covered car parked in front of the school the next morning. Fin.

While the film ends on an abstract note, the ending of the book makes what happened a bit clearer. (Though still leaves some things open to interpretation.) In the novel, after the woman follows Jake into the school, she realizes that she and Jake are the same person. She doesn't really exist and is instead a figment of Jake's imagination. Jake reveals that he invented a life with her after seeing her in a bar one time to see what it would be like to have someone. The janitor then finds Jake and encourages him to die by suicide by saying "I'm thinking of ending things" and handing him a sharp object. Jake obliges. It's then revealed by other characters — the book uses a framing device of two unknown people discussing a tragedy at the school — that the janitor was also Jake and that he had died by suicide in the school after several decades of mental decline. He had written down his imagined life, i.e., the main events of the book and movie, in notebooks that were later found after his death.

Even for a Kaufman movie, I'm Thinking of Ending Things is tough to follow. But if you're familiar with the book, then you can deduce that practically everything you saw on screen — the farmhouse trip, Jake dating the woman, everything with Jake's parents — happened only in the head of a lonely janitor.

More like this
What’s New On Netflix: Ana De Armas’ 'Blonde' & A Nick Kroll Special
By Arya Roshanian
Here’s Everything Coming To & Leaving Netflix In October
By Jake Viswanath
What’s New On Netflix: Meet 'The Real Bling Ring'
By Arya Roshanian
Here’s When 'Love Is Blind: After The Altar' Was Filmed, Because It’s Hard To Keep Track
By Grace Wehniainen
Get Even More From Bustle — Sign Up For The Newsletter