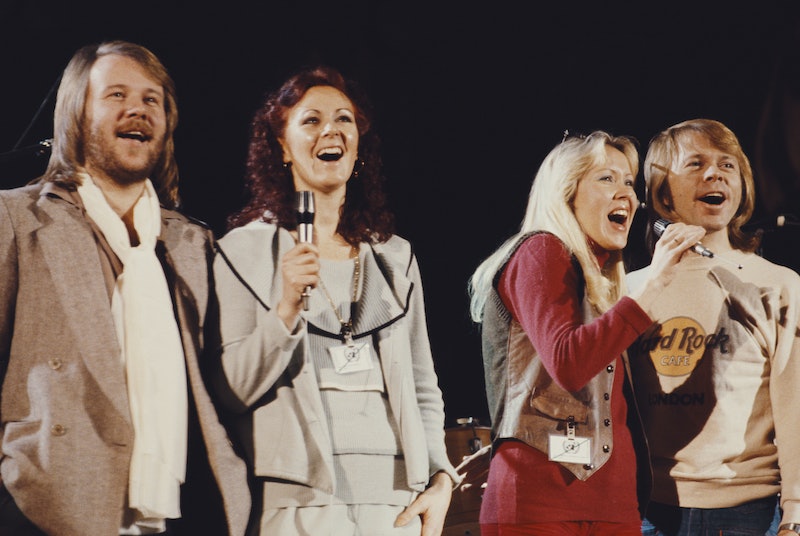 ABBA and its music are pretty pervasive in pop culture — hello, Mamma Mia!, Mamma Mia! Here We Go Again, and that very catchy Chiquitita remix on TikTok. So firm is the Swedish pop group’s grip on us, in fact, that it’s easy to forget they haven’t actually made music together in 40 years. But on Sept. 2, that all changed — ABBA announced via virtual press conference that they have a new album and very tech-y concert on the way called Voyage, and dropped two new singles just to help the news really sink in.

“They say it’s foolhardy to wait more than 40 years between albums,” the group began in a statement shared by Variety, describing their upcoming performance as “the strangest and most spectacular concert you could ever dream of.”

The concert, which will take place in a specially constructed arena at London’s Queen Elizabeth Olympic Park come spring, will allow the group “to sit back in an audience and watch our digital selves perform our songs on a stage.” OK, it does sound pretty bizarre, but this is ABBA. Let the theatricality run wild.

You don’t need to snag tickets for the concert or even wait for the album to come out Nov. 5 to get into the ABBA spirit. Voyage’s first two singles, “Don’t Shut Me Down” and “I Still Have Faith In You,” are out now — and fans and fellow musicians are loving the new but familiar sound.

Jack Antonoff — who’s had a busy summer himself with Lorde’s Solar Power and Bleachers’ Take the Sadness Out of Saturday Night — took to Twitter to describe the new music as “absolutely beautiful.” Many fans noted on Twitter and TikTok that the songs arrived just in time to bring the main character energy for fall. Seriously, with lyrics like “I’ve been reloaded ... I’m fired up, don’t shut me down,” this is the kind of stuff you’ll want to add to your jog or power walk playlist.

Now, there’s just one question at the top of many fans’ minds. When is Mamma Mia! 3 — or, perhaps, Mamma Mia! Here We Go Again (Again) — going to weave a sun-soaked, Greek island narrative around the new music? It’s not that out of reach. Last year, producer Judy Craymer revealed to The Daily Mail that she’s been thinking about a third entry. “I think one day there will be another film, because there’s meant to be a trilogy ... I know Universal would like me to do it,” she said. Plus, she was already counting on new music from ABBA to guide the sequel — so it sounds like things could finally be moving in the right direction.

As you wait patiently for that potential third installment, you can now keep up with ABBA on TikTok — they joined this August in preparation for the big announcement, and even seem to be privy to their music featuring in several trending sounds.

More like this
The Spice Girls Just Dropped A Brand New Music Video
By Sam Ramsden
Everything To Know About Taylor Swift’s 10th Studio Album, 'Midnights'
By Grace Wehniainen and Jake Viswanath
Mariah Carey Is Releasing Her “Lost” '90s Grunge Album
By El Hunt
Craig David Is Still Slicker Than Your Average
By Olivia-Anne Cleary
Get Even More From Bustle — Sign Up For The Newsletter