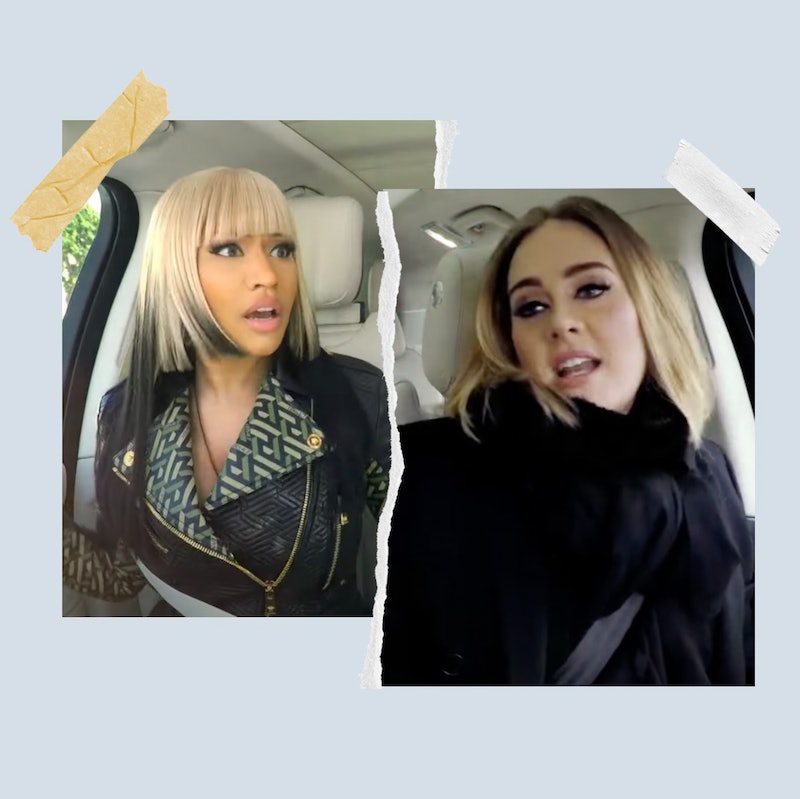 The only thing better than Adele’s rendition of Nicki Minaj’s “Monster” verse might be the rapper’s impression of Adele. During James Corden’s first Carpool Karaoke episode in two years, which premiered on April 6, Minaj rapped “Monster” alongside Adele’s cover and gave a very accurate and impressive imitation of Adele’s speaking voice.

After opening the Carpool Karaoke with her 2014 hit “Anaconda,” Minaj started talking in a British accent for no reason, making Corden ask for her best Adele impression. “I go viral for basically anything, do you know what I mean? I sit down at the basketball game, right? I don’t look at the cameras, I do one of these numbers,” Minaj said with a spot-on Adele accent, nodding to the meme of Adele totally avoiding the camera at a March basketball game. “People pay for these sort of viral moments, do you know what I mean?”

Minaj then rapped her famous verse from Kanye West’s 2010 hit “Monster,” which was edited alongside Adele’s 2016 Carpool Karaoke cover for the mashup we didn’t know we needed. Minaj also gushed about how much she loved Adele’s version of her rap. “[Adele] made me so, so happy,” she said. “She embodied Nicki Minaj. She just naturally has that thing, you know? It’s different because she’s singing these sad songs, so you don’t expect it from her.”

Minaj already gave fans her best Adele back in February during a previous appearance on The Late Late Show with James Corden. She explained how she lands her North London accent so well, complete with hand gestures. “In order for me to channel Adele, I sort of have to think like a Black lady in London, right?” she said. “My British accent is sort of like a posh white lady, a rich white lady. But with Adele, I sort of have to transform .... You know, she might’ve used to sell crack and ... maybe she used to be hustling, like, nickels and dimes in the hood and then ... she got her big break. That’s what I see when I see her, like, she always so expressive.”

More like this
Cruz Beckham Teased New Music With An Adorable Nod To Mom Victoria Beckham
By Stephanie Topacio Long
Britney Spears Shares & Deletes Photos Of Justin Timberlake From 22 Years Ago
By Jake Viswanath
Twitter Can’t Believe The Madonna Biopic Is Scrapped & Fans Have A Solution
By Alyssa Lapid
Hilary Duff's Husband Matthew Koma Has Her Name Tattooed On His Butt
By Jake Viswanath and Stephanie Downs
Get Even More From Bustle — Sign Up For The Newsletter
From hair trends to relationship advice, our daily newsletter has everything you need to sound like a person who’s on TikTok, even if you aren’t.