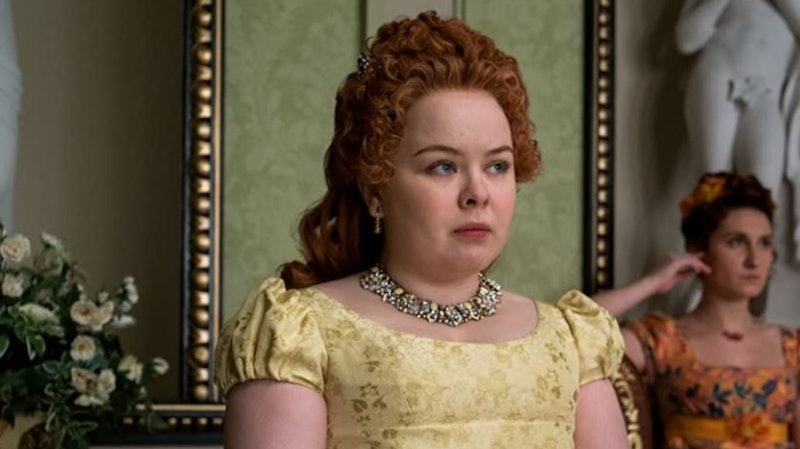 Nicola Coughlan — Lady Whistledown, to us mere mortals — really is just like us. Ahead of the hotly-anticipated premiere of Bridgerton’s second season, the Irish actor made an appearance on BBC One’s The One Show. Coughlan recounted her first day on set of the Netflix series, and how the show’s costume designer, Ellen Mirojnic, told her that as she was “so tiny” they needed to put her in heels.

“I was just terrified to get fired because I couldn’t believe my luck at getting the job,” Coughlan explained, daunted by the fact she could fall over (which she did). “I said, ‘yes, absolutely.’ So I agreed to wear these crazy heels, and then on my first day on set we were walking around and I toppled over not once, not twice, but three times,” she recalled. To make matters worse, Coughlan also happened to be holding a dog at the time — a scene that was cut because the dog kept looking directly at the camera, Coughlan shared on Instagram.

As for what you can expect from Coughlan’s Penelope Featherington – and her alter ego Lady Whistledown – in season two, the actor teased that “it gets quite hairy.” She told The One Show viewers: “You see behind the curtain and how she’s getting away with it. I always say it’s like [her] drag queen persona is Lady Whistledown, and she gets to pretend to be somebody else. It was so much fun!”

But will Penelope see any ramifications for keeping her alter ego a secret for all this time? It seems so. “I think it’s safe to say that you do,” Coughlan told Radio Times. “And you know, the final moments of series one was definitely a peek into her life.”