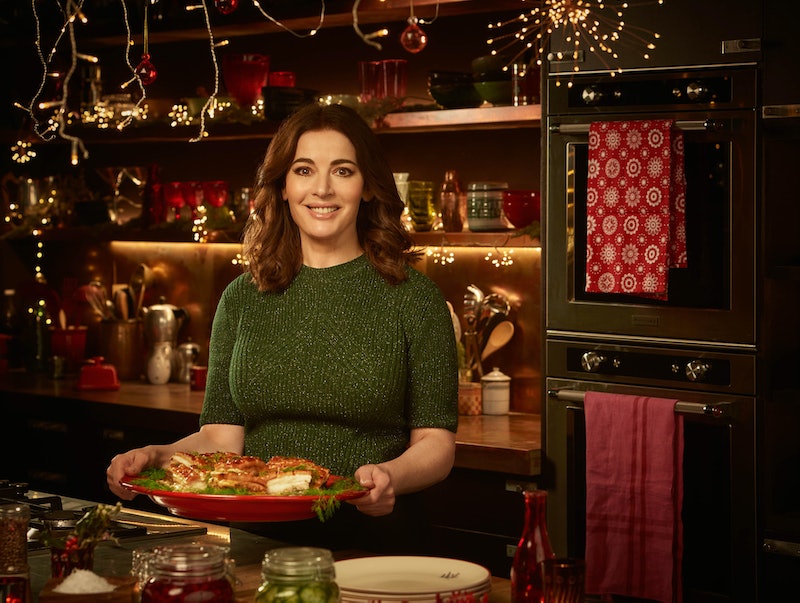 Deciding which meat will be the centrepiece of your Christmas dinner can be an arduous task. But with many families across the country celebrating on a smaller scale this year, it's most likely you'll be looking for something other than a huge turkey — unless you're happy eating turkey sandwiches for the next three weeks, that is. One celebrity chef has refrained from the big bird route this year, as Nigella Lawson has decided to serve pork instead of turkey.

Nigella is no stranger to food controversy – her recipes have got us talking on more than one occasion – and her unique way of pronouncing microwave delighted us, too. But her main reason for skipping turkey this year? Lawson feels she'll be less sad "doing something that is just a lovely lunch, that takes in a few Christmas traditions from elsewhere that interest me, but [does] not make me feel what's missing," she said on a recent episode of the BBC's Newcast podcast. "One of the things I think we've all realised is how we miss having people round our table, and therefore all that worrying over 'is this perfect, should we do this or that,' you realise that is actually secondary to the feeling of eating with other people."

"I would have thought, for many people, the strange conditions under which we live will make them want to cleave to the traditions, and not add new and different things," she concluded.

That's not to say the chef will be spending Christmas alone, though. Last month Lawson told Good Housekeeping that she was planning on being surrounded by her children. While this may have changed since the new restrictions were put in place, she was looking forward to "a lot of cooking, a lot of eating, and lots of lying about."

"I love watching films with them and I enjoy not having things in the timetable. I'm also a bit clichéd and like having the fire burning and lots of tealights and fairy lights," Lawson continued. "It's about turning your home into this cocooning, magical place where it feels a bit different from the rest of the year."