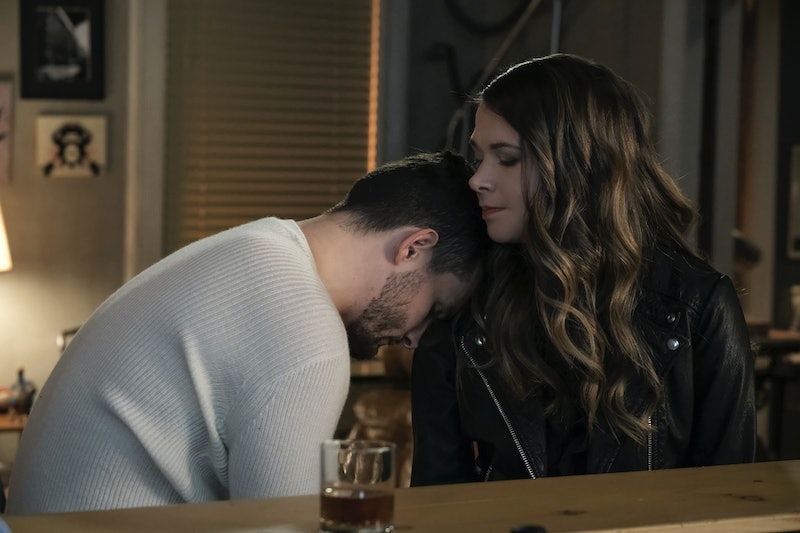 Fifteen years after Younger landed in stores — and five years after TV Land brought the book to the small screen — author Pamela Redmond's Younger sequel, Older, is coming to a bookstore near you. As fans of the series know, Younger centered on Alice (called "Liza" in the TV Land series and in the new book), a fortysomething woman mistaken for a 29-year-old by a handsome bachelor named Josh. Instead of correcting him, she rolls with it — pretending to be a millennial and becoming his new girlfriend. Things don't work out for them romantically, setting the stage for the Younger sequel.

As Older opens, 50-year-old Liza has just published a tell-all novel — also titled Younger — about her age-defying social experiment and her failed relationship with Josh. Her friend in L.A. wants to turn Younger into a TV series, but she needs Liza's help. Departing for L.A. means leaving a lot of things behind in New York, though... including Josh.

See what happens in Redmond's Younger sequel when Liza reconnects with Josh in this exclusive excerpt from Older.

Josh invited me to meet at his office at five on Thursday.

Show you around, he texted. Catch up.

Being a mature, sensible person who was certainly capable of having a friendly relationship with her ex, I agreed.

It was a good thing we didn’t meet until five, because it took me all afternoon to get dressed. After never once wearing leather pants in my entire life, I now seemed to find them suitable for every occasion. I blow-dried my hair and put lipstick on, then wiped it off three times. Looking effortlessly hot took a lot more effort than it used to.

The problem with Josh was that he actually did look effortlessly hot. He was wearing an old tee shirt I’d personally slept with my nose pressed against, and the loose jeans that perennially looked as if they were about to slip off his slim hips. He also had on his studious, horn-rimmed James Dean glasses, which made him look the way they made James Dean look: even more heartbreakingly handsome than usual.

I reached out my hand to shake his.

“Come here,” he said, opening his arms. I walked into them like a zombie bride.

He felt so good, he looked so good, I wanted him like a chocolate chip cookie at the end of a long diet, and as with the cookie, I also knew that having him would be a huge mistake. Slippery slope.

Plus, I didn’t want him! I didn’t in theory and I didn’t even standing there in his arms. But I was craving him, and I knew being with him would feel so good. Did I want him because I was lonely, because I was angry, because I wanted to prove I could take him away from his young girlfriend? Yes, probably all of the above.

As he showed me around the office, I tried to focus on the huge arched windows that had been restored and on the specially polished concrete floors, but all I could really think about was how I wanted two very different relationships with the same person at the same time. I wanted, like some mythical villainess, to throw him down on the floor and have my way with him, then discard him to the fires of hell. But I also wanted to reclaim the easy camaraderie of old friends happy to be back in touch.

I nearly bumped into him. He stood there with a large goofy grin on his face.

“It’s... fantastic,” I said, hoping that was a reasonable response to whatever the hell he was talking about. “I’m just not sure I understand what exactly you do.”

Josh had traded tattoo artistry for digital startups when we were still together, but none of his businesses had ever made any sense to me.

To my relief, he laughed. I loved his laugh.

“We put all your information in your own hands,” he said. “Your data is out there, people are trading it, making money from it, but if anyone should be able to license it for profit, it’s you.”

I got a shiver. It was Etsy for the soul!

“You are going to be so fucking rich,” I said.

I wanted to marry him.

I wanted to punch him.

“Right now we’re testing a free model, like Unsplash,” he said, as if I should know what that meant. “We’ll give people free access to their information, if they let us use it to hyper-target advertising on our own site. Later we’ll introduce a paid model where you can track what’s happening with your data in real time, get alerts when new information about you is posted or accessed, and even auction your data to multiple bidders.”

“How much would somebody pay for the data of a lonely middle-aged woman with a thing for younger guys?” I joked.

Could somebody please just laser me unconscious?

“Uh, that could go for a lot,” he said, his cheeks tingeing pink. “Do you want to go up on the roof?”

Did a starving woman want a chocolate chip cookie?

The roof had a proper deck, with views of the harbor and the green glint of the Statue of Liberty peeking from the side of one of the new skyscrapers. There was also a mini fridge and a self-service bar and modern sofas angled to catch the setting sun.

Josh got out a bottle of champagne and approached the sofa, holding two champagne flutes. Holy shit, what was happening?

“I wanted to tell you how much I loved the book,” he said.

“Oh.” I felt relieved, and a little bit deflated. “So you were okay with the Josh character?”

Josh had made me promise, back when I first started writing, that if I ever wrote about him, I’d use his real name and tell the whole truth.

“Everything about me was fine,” he said. He handed me the flutes and began wrestling with the champagne cork. As it released with a soft pop, he said, “But there were some things in there I didn’t know about you.”

We’d gotten back together after our first breakup and lived together for two years. We’d planned to get married. I thought he’d known everything about me.

He filled both glasses, then set down the bottle and took one of the glasses for himself. I felt his pinky brush my hand.

“I had no idea you felt so terrible about lying to me,” he said, “or how much it hurt you to break up with me.”

“I thought I was the only one who was hurting,” he said, his long fingers nervously twirling his glass, though he did not take a sip. “Maybe you were more stoic with me then, acting kind of like the grown-up not wanting to upset the kid by being upset. And maybe I was too young and dumb to see.”

He set down his glass and reached for my hand. “I thought maybe the ending of the book, with him in Tokyo and her in New York thinking about each other, was a message to me.”

“Um, no,” I said. Though now that he mentioned it, maybe?

“Last time we saw each other after being apart a long time, we fell back in love,” he said.

That had happened, I acknowledged.

“So I thought maybe you were trying to tell me that you wanted us to see if that could happen again.”

He was still holding my hand and gazing lovingly at my face.

“Then you invited me to your party,” he said.

“I thought it was time we were friendly.”

“That’s what you said last time. And half an hour later, we were tearing each other’s clothes off.”

I’d only really loved one man in my entire life, and that was Josh. Oh, maybe I’d loved my husband back at the beginning of our relationship, but I was happier with Josh than I’d ever been with David. But Josh and I could never truly be happy together again. Therefore I had to make sure not to fall in love with him, which meant I should not have sex with him, which meant I should not be lounging on his private rooftop, drinking champagne.

I drained my glass. He still had not taken one swallow.

“I can’t be the reason somebody doesn’t have kids, Josh,” I said.

I confess: I had rehearsed that line alone in the Maine cabin many times.

“I didn’t just want kids! I wanted them with you!”

“And I didn’t want them at all. You knew that. Did you think you were going to change my mind?”

“I thought we’d discuss it, and if you still felt that way, we’d go on, happy as before.”

“But how could we be happy,” I said, “with that between us?”

“I could have been happy,” he said.

He moved closer to me. Put his arms around me. And then he kissed me.

It felt so good, like falling into your own bed after being on the road for months, like turning your face to the sun after a long winter in a cold house. Did I really need to leave the past behind in order to move into the future?

But no, no. Even if getting back together with Josh was what I wanted, which it wasn’t (it wasn’t!), doing it this way made me feel really dirty, and not in a good way.

“Things aren’t great between me and Zen,” he mumbled.

That did not make me feel better. I had never seen Josh as a player. But if he could do it to her, couldn’t he do it to me? I’d been cheated on once, by my ex-husband, and that had been devastating. It felt cosmically wrong to do that to somebody else.

He edged closer. “You were here first,” he said, trying to slip his arms back around me.

I pushed him off and stepped back. “Stop!” I said. “You’ve got to figure out your relationship with Zen before you try to start anything between us.”

“If I break up with Zen, are you going to be there waiting?” he asked.

“I don’t know, Josh,” I said. “It’s like with having kids. You’ve got to resolve this for yourself first, and then we’ll see where I am.”