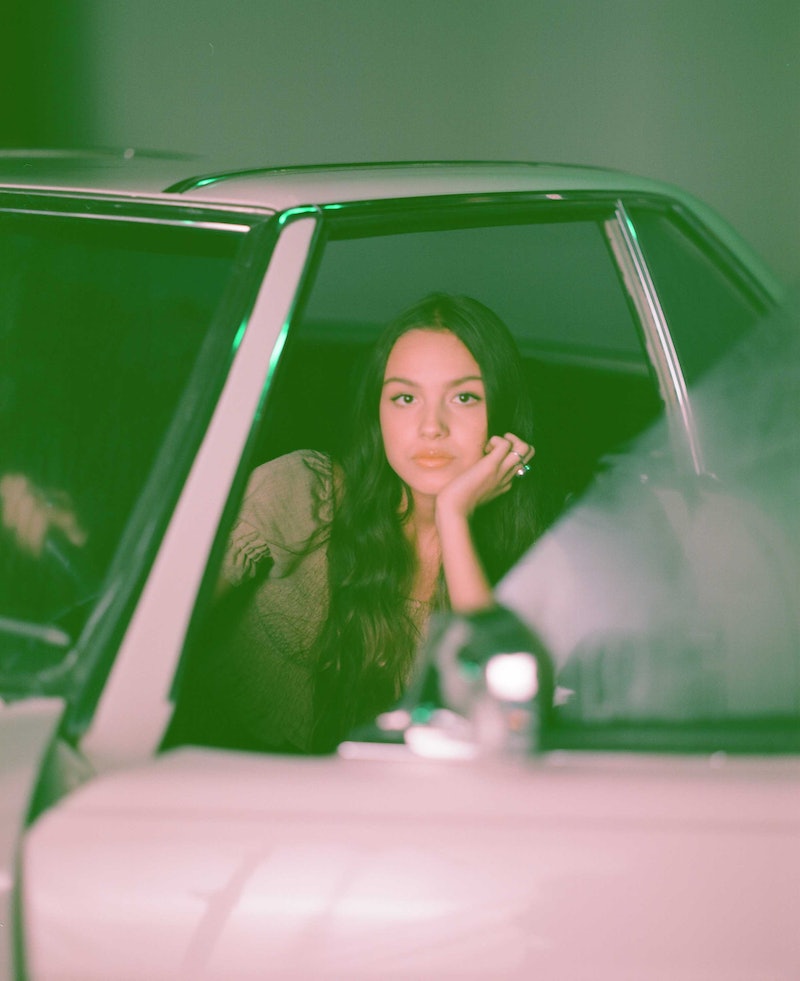 Since its release on Jan. 8, Olivia Rodrigo's "Drivers License" has been comfortably sitting atop of nearly every music chart there is, including four weeks at #1 on the coveted Billboard Hot 100 — an incredible feat for any artist, especially with a debut single. The song, also a hot topic due to the presumed Disney star love triangle behind it, has been added to nearly 40,000 heartbreak-themed playlists on Spotify, where it's amassed over 320 million streams to date. With Valentine's Day right around the corner, Rodrigo took over the streaming platform's "Broken Heart" playlist with her favorite "sad girl songs," and Bustle has your exclusive first look.

“Music helps me during a breakup, and just in life in general because it really makes me feel a lot less alone, and it kind of articulates feelings that are sometimes really hard to articulate," Rodrigo detailed in a video message she shared with Bustle. "So that’s what I sort of tried to do in these playlists. I think they capture all of the feelings that go with a breakup — all of the anger, and angst, and sadness, and longing, so I really hope you dig it.”

Rodrigo's "Drivers License" made Spotify history when it racked up 17.01 million streams on Jan. 12, which set the record for most streams in a single day for a non-holiday song. Upon release, the Dan Nigro-produced power ballad received acclaim for Rodrigo's exquisite songwriting and vocal chops, garnering comparisons to Taylor Swift (whom she stans) and Lorde. It was also much-discussed due to speculation that it references her rumored relationship with High School Musical: The Musical: The Series costar Joshua Bassett, who many fans think left her for fellow Disney star Sabrina Carpenter. "I totally understand people’s curiosity with the specifics of who the song’s about and what it’s about, but to me, that’s really the least important part of the song," Rodrigo said in a recent interview with Billboard. "It’s resonating with people because of how emotional it is, and I think everything else is not important."

Continuing her thoughts about music and heartbreak, Rodrigo added, "I am so excited that Spotify let me take over their Broken Heart playlist so that I can share my favorite songs to drive around and cry to." Similar to "Drivers License," the tracks she picked evoke feelings of melancholy and heartbreak, like Kacey Musgraves' emotionally conflicted "Happy & Sad" and somber tracks from Swift, including "Back to December" and "Illicit Affairs."

Check out Rodrigo's take on the "Broken Heart" playlist below, which you can stream now on Spotify as part of the platform's revamped Romance hub.

More like this
25 Years Later, Mariah Carey Re-Releases 'Butterfly' With 8 New Songs
By Jake Viswanath
Everything To Know About Taylor Swift’s 10th Studio Album, 'Midnights'
By Grace Wehniainen and Jake Viswanath
What Demi Lovato Really Thinks About Child Stardom, Depression, & Sobriety
By Radhika Menon
Kanye West Apologizes To Kim K "For Any Stress I Have Caused" In Rare Interview
By Jake Viswanath
Get Even More From Bustle — Sign Up For The Newsletter