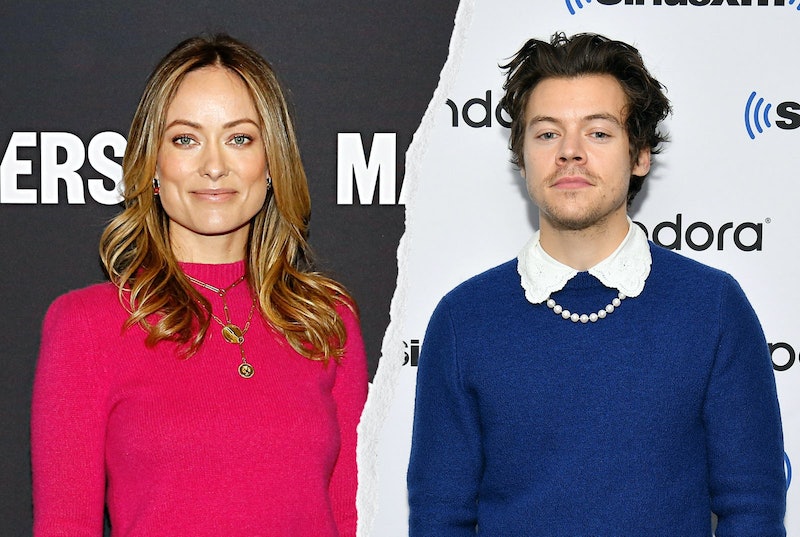 Olivia Wilde isn’t just an actor — she’s also a director, which means she always knows a good movie pitch when she hears one. That’s why, when journalist Evan Ross Katz took to Instagram on Tuesday, March 31, with a hilarious pitch alongside a side-by-side photo of Harry Styles and Allison Janney wearing big fur coats, the 37-year-old filmmaker knew she had to hear him out.

“Need a cinematic universe where it’s Harry Styles and Allison Janney in bulky fur coats,” Katz captioned the post, which featured a picture of Styles next to a photo of Janney from I, Tonya. “We can figure out plot details at a later date.” Wilde, for her part, didn’t approve or dismiss the idea. However, she did post a laughing emoji in the comments section to make it known that she thought it was absolutely hilarious.

Whether this plotless film comes to fruition or not, fans of the actor and the former One Direction star, who reportedly began dating early this year, have a lot to look forward to. The two recently worked together on Wilde's Don't Worry Darling film, which, according to Page Six, was how they first struck up a romance. The outlet also said at the time that the “Watermelon Sugar” singer introduced Wilde to his friends as his “girlfriend.”

Speculation that Wilde and Styles were dating first began when People reported that they were spotted together at Montecito, California's San Ysidro Ranch for a friend's wedding in Jan. 2021. There were even photos of the duo wearing what appeared to be matching lace outfits. A source told the magazine that they had been seeing each other “for a few weeks.” “What started out as a close friendship, quickly turned romantic,” the outlet’s source said. “Everyone saw it coming. During breaks, he's hasn't been able to stay away and visited her trailer.”

The following month, Wilde took to Instagram to praise everyone involved in the making of Don’t Worry Darling, and especially the “Adore You” crooner for taking on a supporting role. “Little known fact: most male actors don’t want to play supporting roles in female-led films,” she wrote. “The industry has raised them to believe it lessens their power (i.e financial value) to accept these roles, which is one of the reasons it’s so hard to get financing for movies focusing on female stories. No joke, it is harrrrrd to find actors who recognize why it might be worth it to allow for a woman to hold the spotlight.”

Then, she addressed styles directly. “Not only did he relish the opportunity to allow for the brilliant @florencepugh to hold center stage as our ‘Alice,’ but he infused every scene with a nuanced sense of humanity,” she continued alongside a black-and-white photo of the singer sitting on a vintage car. “He didn’t have to join our circus, but he jumped on board with humility and grace, and blew us away every day with his talent, warmth, and ability to drive backwards.”

Interestingly, this wasn’t the first time the actor gushed over her now-boyfriend. In a Nov. 2020 interview with People, Wilde said she “did a little victory dance” when she found out Styles would be replacing Shia LaBeouf in the 1950’s thriller. "To me, he's very modern and I hope that this brand of confidence as a male that Harry has — truly devoid of any traces of toxic masculinity — is indicative of his generation and therefore the future of the world,” she said. “It's pretty powerful and kind of extraordinary to see someone in his position redefining what it can mean to be a man with confidence.”

More like this
Harry Styles Just Split His Pants In Jennifer Aniston’s Face
By Sam Ramsden
James Cameron May Come To Regret His 'Titanic' Door Experiment
By Stephanie Topacio Long
The 2023 Super Bowl Commercials Feature A 'Breaking Bad' Reunion & Missy Elliott
By Alyssa Lapid
Taylor Lautner Copped To Finding Jacob "A Little Annoying" In Twilight
By Stephanie Topacio Long
Get Even More From Bustle — Sign Up For The Newsletter
From hair trends to relationship advice, our daily newsletter has everything you need to sound like a person who’s on TikTok, even if you aren’t.