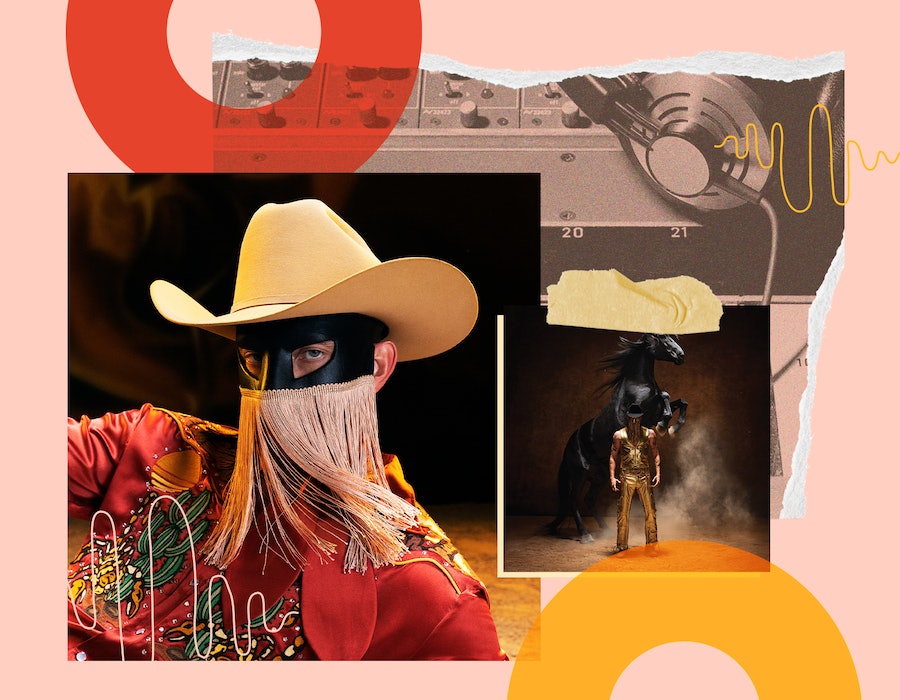 In early 2020, Orville Peck’s career was starting to take off in earnest. The masked country singer who made waves for his mysterious stage persona and flamboyant take on the cowboy aesthetic had already logged hundreds of days on tour in support of his critically acclaimed debut album, Pony; he was doing fashion shoots and flying around the country recording a follow-up EP, Show Pony. He was supposed to be about a week into an even bigger tour when everything came to a screeching halt amid a global lockdown — Peck’s burgeoning career included.

Suddenly without a steady job and an apartment of his own — he’d left his in anticipation of the tour — Peck felt truly unmoored. The isolation-tinged Old West cowboy tropes in his lyrics were starting to feel a little too real. Even the lone ranger can start to feel a little too alone.

He retreated to Los Angeles and into a deep depression, convinced he wouldn’t make music again. “I realized that I was really unhappy with all the other areas of my life,” Peck tells Bustle from Nashville. “I'd kind of been escaping them and neglecting them by focusing solely on work, and I was running on empty.”

But losing everything, including crucial industry momentum, can be freeing. Left to start from scratch, Peck made major changes in his personal life and eventually returned to the studio with a new sense of lightness. “A lot of people obviously get hung up on the idea of a second album or the sophomore slump. I think leading up to Covid that was on my mind a lot,” Peck says. “In a strange way, Covid allowed me this big overhaul of my personal life and took me back to a place where I was able to just write music because I loved it and not because I felt like it was my job.”

The result is Bronco, a collection of vintage country songs and Roy Orbison-style ballads that feels at once indebted to their influences and completely fresh. That stylized modernity extends to Peck’s many music videos, which present his fully-realized queer, inclusive view of the country scene (Peck is gay) and often prominently feature drag performers. With the wheels of his career in motion again, Peck is about to head out on tour, too. And this time, he’s fully ready to get back on the horse.

Below, Peck talks about his evolving relationship with anonymity, Whitney Houston, and dropping the mic at karaoke.

On Anonymity & Honoring His Hometown

Creating Bronco in lockdown sounds like a really cathartic experience. Tell me about one song on the new album that you’re particularly proud of.

I'm really proud of “Kalahari Down.” Everyone used to ask where I was from and I would never say... obviously, people know I like to keep a little bit of mystery about myself. Then there was this assumption at some point that I was Canadian, which I'm not, but I never even corrected anyone because I wanted to let it play itself out until I was ready to release a song about where I'm from. “Kalahari Down” is about me being South African and growing up in Johannesburg. It's a song about regret of leaving the place that you're from [to] pursue your career, and that constant tug of not ever feeling like you're at your home.

Everyone who knows me knows I'm so proud to be South African. It's still my favorite place on the planet. So I finally feel like I got to write this big homage, a love letter to my home.

Is your perspective on remaining anonymous changing as you continue releasing music?

I think it's just evolving itself naturally, which is what I always intended it to do. I've always said that I feel like I'm hiding in pain sight. I've never really even thought of myself as anonymous. Yes, I have a stage name and I wear interesting outfits, [but] I think of anonymity with inauthenticity, in a way. And I feel like I've been authentic since day one.

I just am the kind of person who grew up liking artists where I didn't have access to every single detail of their lives. I didn't really care to know every detail of their lives because I feel like it ruins some of the mystery and it ruins some of the magic of why we fall in love with art. I can't stand films or TV where it's overly scripted and spoon-fed; I don't like anything heavy-handed. I like subtlety in art and I like a little bit of mystery, and I think that's different than anonymity. So that's what I've always tried to maintain.

On His Alternate Career Path & EDM

What job would you have if you weren't a musician?

When I was a kid, I really wanted to be a doctor or a surgeon. I'm really fascinated by medical stuff. I'm kind of OCD and meticulous. I barely made it through high school, so I definitely wouldn't have gone to medical school. But I like the feeling of helping people or healing people. I probably would've gone into medicine.

Is there a genre that you wish you made music in?

You can contribute the vocals and someone else can be on Ableton, or whatever.

Someone will have to be on Ableton, not me.

What’s a song that should play at your wedding and one that you’d want played at your funeral?

Oh my goodness. My favorite wedding, love song vibe is Buddy Holly's “True Love Ways,” which I think is a really beautiful song. My funeral? I'd either want people to be sobbing or dancing. So if they were going to be sobbing, I would go with Skeeter Davis, “It's The End of the World.” And if it was going to be happy vibes, maybe I'd do something unexpected, like Amy Winehouse, “Tears Dry on Their Own.”

What was the first CD you ever bought?

The first time I had any kind of money — I had a job working for my friend's father's landscaping company — I bought Patti Smith's Horses. It's funny because her album is called Horses, and every album I've ever made now is connected to a horse theme. So maybe it had more of an impact on me than I realized. Someone pointed that out to me once and I thought it was really funny.

I do. I kind of hate when people who can sing do karaoke, because it's kind of an eye roll. I'm someone who, believe it or not, I don't really like to be the center of attention. So I'm usually pretty chill at karaoke and I kind of like watching people that aren't singers do karaoke because I think that's the charm in it.

But if I've had a couple drinks and I'm with a bunch of people and I get coerced, I'll go and do a super banger. I'll do “The Greatest Love of All” by Whitney Houston or I'll do “Time to Say Goodbye” by Andrea Bocelli or something really next-level vocal. And then I'll take off and leave them shook.

More like this
"Lavender Haze" Star Laith Ashley Breaks Down Filming With Taylor Swift
By Jake Viswanath
The Jonas Brothers' New Album Has A Very Meta Name
By Alyssa Lapid
The Beyhive Is Mad At Harry Styles After Beyoncé’s Album Of The Year Snub
By Jake Viswanath
Twitter Is Having A Meltdown Over Buying Beyoncé Renaissance Tour Tickets
By Jake Viswanath
Get Even More From Bustle — Sign Up For The Newsletter
From hair trends to relationship advice, our daily newsletter has everything you need to sound like a person who’s on TikTok, even if you aren’t.