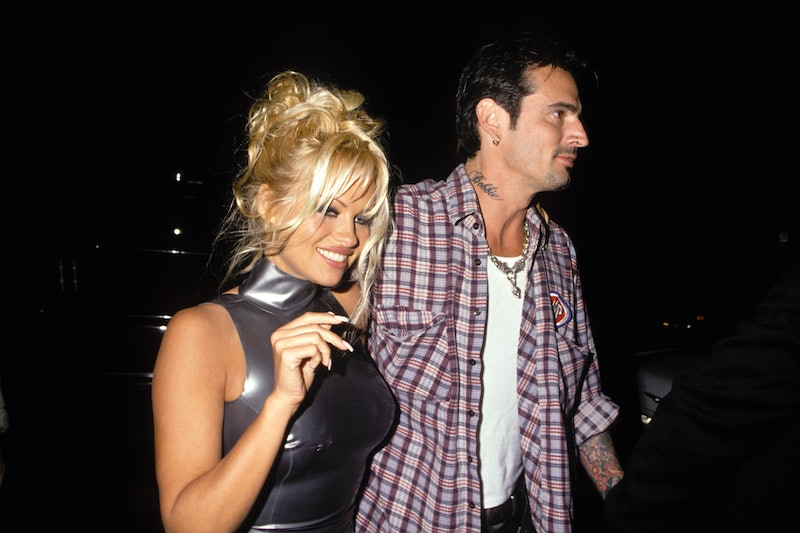 Paris and Helen, Antony and Cleopatra, Gertrude Stein and Alice B. Toklas — some of the most well documented and fictionalized love stories in history. This month, Hulu aims to cement another duo into that lineage: actor Pamela Anderson and drummer Tommy Lee. The new eight-part series Pam & Tommy follows the couple’s ’90s relationship, starring actors Lily James and Sebastian Stan. In 1995 Anderson and Lee got married in Cancun, less than a year before a sex tape of theirs was stolen, sold, and subsequently leaked online.

Famously, the couple wed after only four days of dating. Both James and Stan worked with an intimacy coach to capture their happy-go-lucky ethos. “Certainly, with Pam & Tommy, and those crazy four days, we wanted to revel in that passion and explosion of their relationship. But we also didn’t want it to feel sensational or unnecessary,” James told Variety earlier this month.

Keep reading for an overview of the couple’s seaside wedding.

By the mid-’90s, Anderson was a staple of the Baywatch franchise, appearing on five of the series’ original 11 seasons. She and Lee ran in similar circles, according to the New York Post, and the two finally met on New Years Eve in 1994 at a club on Hollywood’s Sunset Strip called Sanctuary. In an interview she gave with Movieline in 1995, Anderson says their courtship began with him grabbing and licking her face. Her response? “I thought he was a cool, friendly, nice guy. I gave him my number.” In an autobiographical memoir of his band, titled The Dirt, Lee writes about being out with friends that night, “popping E, drinking champagne and being fucking maniacs,” before he noticed Anderson. He confirms the licking.

In The Dirt, Lee writes that he called Anderson repeatedly until she answered and agreed to meet, but her work schedule — a trip to Cancun for a photo shoot — foiled their plans. On learning of the trip, Lee responded, “You’re going without me?” Anderson asked him not to join, to which he responded, “OK. See you later.” She told the New York Post it was “a weird way for the conversation to end.”

Lee followed Anderson to Mexico, tracking her down at the Ritz-Carlton hotel. Lee details the boozy beginning of their renewed romance in The Dirt, writing, “When we finally fell asleep, that was the first time the entire night that we stopped looking into each other’s eyes.” The pair decided to stay in Cancun for two additional days after Anderson’s shoot. Lee proposed after a night of dancing at La Boom, a former night club in the area. He used his own pinky ring for the occasion. Her response? “She said yes, hugged me and stuck her tongue down my throat,” Lee says.

The following morning, they found someone to officiate the ceremony. “We gave blood, sniffed out a marriage license and were on the beach getting married before the day was over,” according to Lee. The couple wed in an intimate beach ceremony, with Anderson wearing a white string bikini. (The bikini was later stolen from their safe by electrician Rand Gauthier, along with the infamous sex tape, which was recorded on their honeymoon.)

The newlyweds opted for wedding tattoos in lieu of rings. Anderson got the word “Tommy” inked around her left ring finger. “I don’t like jewelry,” she said via the New York Post. “The size of the stone is really about the man’s ego over his little thing. I think diamonds have a direct relationship to your man’s penis size.” Lee similarly got a finger tattoo, and another somewhere less PG. “I don’t know how that got out,” Anderson continued. “There is a very select group of people who see his penis. But yes, [it] says ‘Pamela.’”

Though Lee writes that he and Anderson were “so f*cking happy,” he also admits that “nobody thought it would work, but it did for a while.” During their time together, the pair was inundated with controversy and heartbreak. According to The Dirt, Anderson suffered a miscarriage not long after the wedding, and the paparazzi persistently targeted the two.

The couple divorced in 1998 after three years together. They have two children, Brandon Thomas Lee and Dylan Jagger Lee. During their marriage, Lee was arrested for spousal abuse and subsequently jailed. According to the New York Times, Anderson had the tattoo modified to read “Mommy” after they split. Ten years later, in 2008, Anderson and Lee publicly announced they were back together, although they never remarried.

More like this
Nicholas Hoult Has The Sweetest Things To Say About His Family
By Sam Ramsden
Josh Peck Shows Love To Jennette McCurdy After Her Shocking 'iCarly' Revelations
By Radhika Menon
An Ultimate Guide To The Music Of 'Rap Sh!t'
By Brad Witter
Steve Martin Hints That He May Retire After 'Only Murders In The Building'
By Jake Viswanath
Get Even More From Bustle — Sign Up For The Newsletter