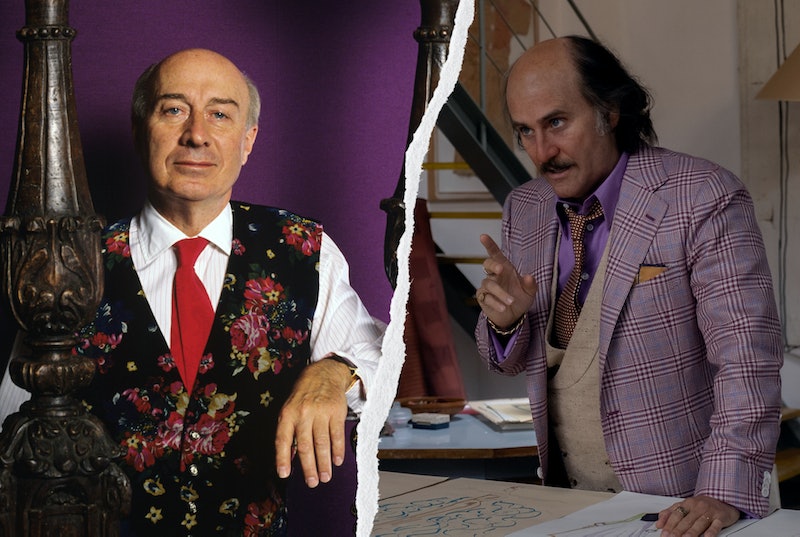 Running a family business always comes with complications — but the Guccis took the concept of “family drama” to the next level. The dynasty’s story is back in the headlines thanks to House of Gucci, a movie that recounts the betrayal, deception, and murder that transpired at Gucci, the famed Italian fashion house.

The film follows the tumultuous relationship between Patrizia Reggiani (Lady Gaga) and Maurizio Gucci (Adam Driver). After a honeymoon phase, their marriage begins to dissolve alongside the family company. Several members of the family fight for control over the brand, including Paolo Gucci (Jared Leto), who is painted as a particularly exuberant character. Leto has received both praise and criticism for his turn as Paolo, garnering a Best Supporting Actor nomination at the Screen Actors Guild Awards and Critics’ Choice Awards, as well as a Razzie Award nod for Worst Supporting Actor. Leto doesn’t seem to mind the mixed reaction: “I enjoy disappearing into that part. There’s nothing strange about it. What’s strange is people’s interpretation of my art. Everyone has a method,” he told ScreenDaily earlier this year.

Below, a breakdown of what you need to know about Paolo Gucci and his role in the company.

Who was Paolo Gucci?

Paolo is the grandson of Guccio Gucci — the man who founded Gucci in 1906 — and one of the members of the Gucci family who worked at the family business. At one point, Paolo was in charge of running Gucci’s American operation, but that didn’t last long. Ultimately, along with the rest of the family, Paolo was forced to sell his stake in the company.

Paolo was not as involved at the company as his father, Aldo Gucci, uncle, Rodolfo Gucci, and cousin, Maurizio Gucci, but he did work as Gucci’s chief designer in the early ’60s. He ​​even claimed he had designed 80% of the items in the Gucci catalog, according to his 1995 obituary in The New York Times.

Where did things go wrong?

Paolo Gucci was fired from the family business twice. The first time was by his uncle, Rodolfo, and the second was by his father, Aldo.

When Aldo brought the family business to the United States, Paolo was named vice president and managing director of Gucci Shops Inc. and Gucci Parfums of America. The American venture did not go well. A year in, Rodolfo fired him from the Gucci parent company, alleging that he did not carry out his duties while in charge of the factory in Florence, and had generally failed at his job.

After this firing, Paolo decided to launch a fashion brand under his own name, and also filed a lawsuit against Gucci to seek compensation from the company. In response, per the Associated Press, Aldo fired Paolo from his position at Gucci’s American branch.

From this point forward, Paolo and the family were in near-constant conflict. After a 1982 board meeting went awry, Paolo even filed assault charges against his brothers, Roberto and Giorgio, and his cousin Maurizio.

What was the deal with Paolo’s fashion line?

After being ousted from Gucci, Paolo attempted to sue his family for the right to use his own name to found his own fashion line. He spent millions suing his family’s business for breach of contract, according to WWD.

He had big plans for the brand, and dreamt of designing “lamps, sunglasses, furniture, sleepwear, bedding accessories and fabrics, wall coverings, ladies’ underwear, lingerie, plates and flatware,” according to The Fashion Law. Unfortunately, he was never able to launch the “Paolo Gucci” label. Shortly after he was granted the right to use his name for his line, he left the fashion world. In 1980, he stopped working with the family business altogether, and in 1987, he sold all his remaining shares in the Gucci company for $45 million. In 1993, he declared bankruptcy, claiming he had debts of around $90 million.

What happened with his many lawsuits?

Outside of the $8 million he spent fighting for right to use his own name for his new brand, Paolo filed suits for infliction of emotional distress, assault, and battery (the latter was in regard to the volatile board meeting mentioned above).

Seeking retribution, Paolo filed a $13 million lawsuit against his uncle, his cousin, and his father. As if that wasn’t enough, Paolo also volunteered to help American officials with their tax-evasion case against his father. He willingly turned in sensitive information that implicated Aldo, and eventually led to his father’s arrest in 1986.

It should also come as no surprise that Paolo’s ex-wife, Jenny Garwood, sued him for allegedly not paying child support. She claimed he owed $505,600. He spent five weeks in jail in New York for failing to pay back alimony and child support.

How did he die?

Paolo Gucci died from heart and kidney failure at the age of 64. He passed away in 1995 — just a few months after the murder of his cousin, Maurizio Gucci.

More like this
Kukulkan From 'Wakanda Forever' Has A Surprising Connection To Marvel History
By Grace Wehniainen
Reese Witherspoon Confirms This Fan Favorite Will Return For 'Legally Blonde 3'
By Jake Viswanath
Vanessa Hudgens Is Reportedly Engaged To Cole Tucker
By Jake Viswanath
Alicia Silverstone Revives Her 'Clueless' Character In This Super Bowl Commercial
By Jake Viswanath
Get Even More From Bustle — Sign Up For The Newsletter
From hair trends to relationship advice, our daily newsletter has everything you need to sound like a person who’s on TikTok, even if you aren’t.

This article was originally published on November 27, 2021