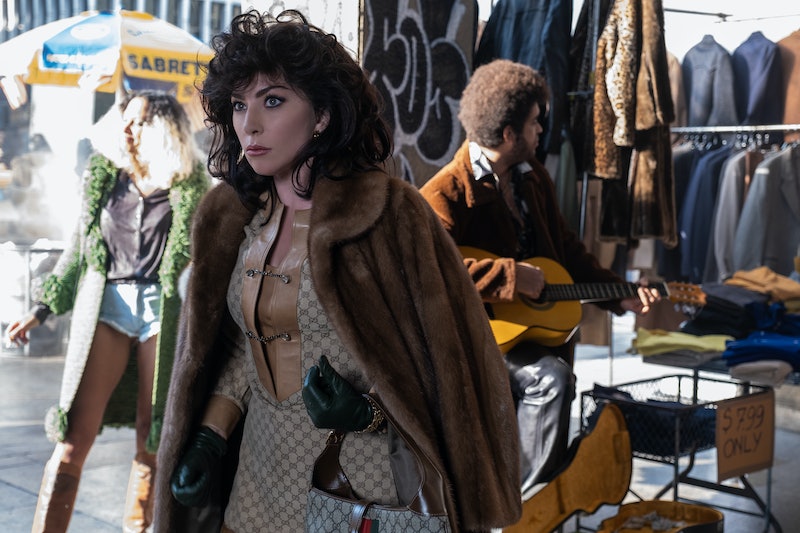 With the awards season buzz around Ridley Scott’s House of Gucci, Patrizia Reggiani is again at the forefront of the public’s mind. And it’s not difficult to imagine why: Lady Gaga’s performance as Reggiani was extremely impressive, garnering her multiple accolades this awards season (albeit not at the Oscars, in a surprising snub).

House of Gucci centers around Reggiani’s relationship with her onetime husband, Maurizio Gucci — and the true story on which it’s based is just as wild as the movie makes it seem. Reggiani first met Gucci at a debutante party in November 1970, and he would later say it was “love at first sight.” However, others in the family weren’t as taken with Reggiani; as stated in Sara Gay Forden’s 2000 book House of Gucci (on which Scott’s film is based), patriarch Rodolfo Gucci described her as a “social climber who has nothing in mind but money.” Despite the Gucci family’s misgivings, Reggiani and Gucci married in 1972 and had two daughters before divorcing in 1985. Apparently, Gucci simply told Reggiani that he was going on a business trip to Florence, and never returned; the day after he left for his “trip,” he had a friend tell Reggiani the marriage was over.

Then, on March 27, 1995, Gucci was shot outside of his office in Milan. In 1998, Reggiani was convicted of having him murdered, and sentenced to 29 years in prison. However, she maintained her innocence throughout the trial, saying her friend, Giuseppina “Pina” Auriemma, set her up. (Auriemma was ultimately sentenced to 25 years in prison, as she allegedly hired the hitman to kill Gucci, on Reggiani’s orders.)

Following the trial, Reggiani has been less adamant about her innocence. According to a 2016 profile of Reggiani in The Guardian, a reporter once asked her why she hired a hitman instead of killing Gucci herself. Her response? “My eyesight is not so good. I didn’t want to miss.”

Reggiani spent 16 years in San Vittore prison before being released in 2014. So where is “The Black Widow” now? Below, all the details on what Patrizia Reggiani is up to.

Reggiani refused to acknowledge herself as a “prisoner,” even while incarcerated.

While serving her 16 years behind bars, Reggiani didn’t like to call herself a “prisoner” or anything else that would indicate criminality. Instead, she’d reference her time in prison as “captivity” or her “stay at Vittore Residence,” which sounds way more glamorous than it probably was. During her “stay,” she passed the time by “sleep[ing] a lot” and taking care of plants.

After her release, she worked as a consultant for a jewelry firm.

Reggiani was originally sentenced to 29 years in prison, which the appeals court reduced to 26 years after a retrial in 2000. However, she was offered parole in 2014, on the condition that she get a job. (Per The Guardian, she was given a similar offer in 2011, but refused, saying: “I’ve never worked in my life and I don’t intend to start now.”)

Reggiani was employed as a design consultant for at Bozart, a high-end costume jewelry shop; in addition to her work as a designer, she also helped out with posts for the company’s Instagram account. Maurizio Manca, Bozart’s co-owner, told The Guardian that hiring Reggiani “was a blessing and a curse; some people thought we were bad people for hiring an assassin.”

As of 2022, Reggiani’s employment status is unknown.

She has a proclivity for adopting unusual pets.

Though Reggiani still has a flair for fashion, the accessory she totes most often these days is her pet parrot. She’s frequently seen strolling around Milan, where she currently lives, with the bird resting comfortably on her shoulder. She even brought her pet to work at Bozart (Manca admitted it was “a bit of a nuisance”).

Additionally, while incarcerated, Reggiani received special permission to keep a pet ferret named Bambi. Unfortunately, Bambi died after one of her fellow inmates sat on him. You can’t make this stuff up.

In fact, she designed an entire collection based on Bo the Macaw.

New York Magazine recently uncovered Reggiani’s forgotten line of handbags and jewelry, which was inspired by her pet macaw. The 2014 collection included a variety of vibrant, multicolored purses and opulent, feathered jewelry. Manca told The Guardian in 2016 that the line was a “big success,” but these days, nothing from the collection seems to be available for purchase — not even on online consignment shops or e-commerce sites like eBay.

While they were close pals at one point, Reggiani and Auriemma have since severed ties. Auriemma now calls herself a “former friend” of Reggiani: “It is true that Reggiani and I were friends, but I was not her lady-in-waiting, also because the lady-in-waiting is paid and she never paid me,” she told an Italian journalist, per the Daily Beast.

She’s “rather annoyed” about her portrayal in House of Gucci.

Earlier this year, Reggiani spoke to Italian news outlet Agenzia Nazionale Stampa Associata about Scott’s film and Lady Gaga’s characterization. “I am rather annoyed at the fact that Lady Gaga is playing me in the new Ridley Scott film without having had the consideration and sensibility to come and meet me,” Reggiani said. “It is not an economic question. I won’t get a cent from the film. It is a question of good sense and respect.”

Lady Gaga later responded to Reggiani’s criticism in an interview with British Vogue, stating: “I only felt that I could truly do this story justice if I approached it with the eye of a curious woman who was interested in possessing a journalistic spirit so that I could read between the lines of what was happening in the film’s scenes … Meaning that nobody was going to tell me who Patrizia Gucci was … Not even Patrizia Gucci.”

The musician-turned-actor received some recognition for her performance, including Best Actress nominations at the Golden Globes, SAG Awards, BAFTAs, and more.

The Gucci brand still thrives today, without input from Reggiani — or any other member of the Gucci family.

Maurizio Gucci was the last member of his family to own any shares in the company — and in 1993, he sold his shares to Investcorp, a Bahrain-based investment company, for a reported $100 to $140 million. Despite the scandals that rocked the luxury Italian fashion house at the end of the 20th century, Gucci remains one of the hottest names in the fashion industry, and is worn regularly by celebrities from Harry Styles to Dakota Johnson to Vanessa Kirby.

Even Reggiani remains enamored. Regardless of the bad blood between her and her former in-laws, she hopes to one day rejoin the House of Gucci. "They need me,” she told the Italian newspaper La Repubblica in 2014. “I still feel like a Gucci — in fact, the most Gucci of them all."

She also has an enduring affection for her onetime husband. In the Guardian profile, she said: "If I could see Maurizio again I would tell him that I love him, because he is the person who has mattered most to me in my life." However, when asked how she thought Gucci would respond, she answered, "I think he’d say the feeling wasn’t mutual.”

More like this
Singer Jenni Rivera Received Death Threats Prior To Her Tragic 2012 Plane Crash
By Brad Witter
Yes, That's Lindsay Lohan's Sister Singing In The 'Falling For Christmas' Movie
By Radhika Menon
Simu Liu's First IG Post With His Rumored Girlfriend Includes Holiday Sweaters
By Stephanie Topacio Long
'The Holiday' Director Just Addressed *Those* Sequel Rumours
By Sam Ramsden
Get Even More From Bustle — Sign Up For The Newsletter

This article was originally published on July 17, 2018