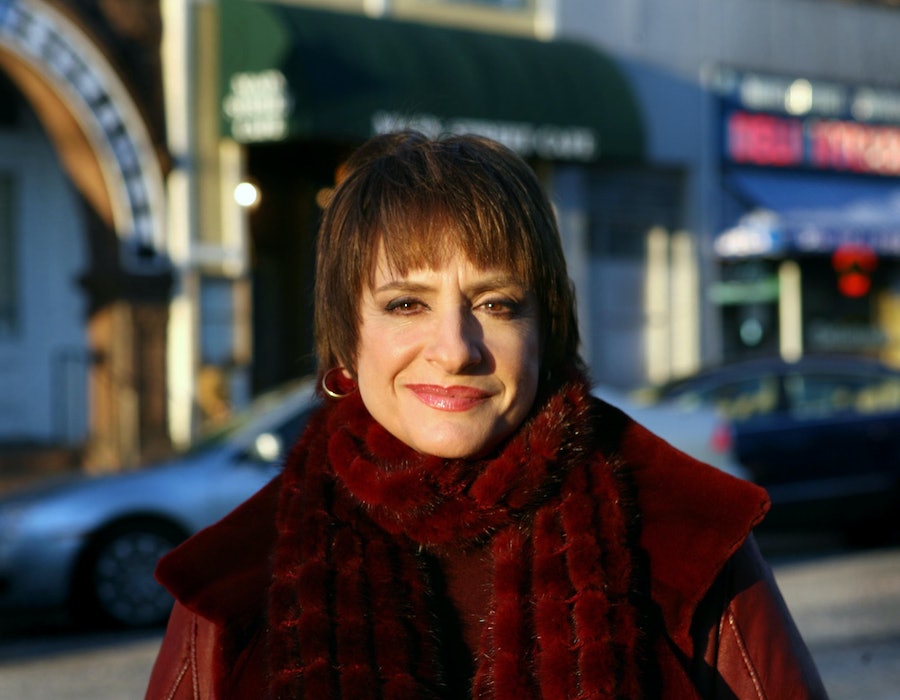 In Bustle’s Q&A series 28, successful women describe exactly what their lives looked like when they were 28 — what they wore, where they worked, what stressed them out most, and what, if anything, they would do differently. This time, Patti LuPone looks back on the hits and misses of her early theatre career and the vindication of winning her first Tony Award.

Patti LuPone vividly remembers her first Hollywood experience. Still licking her wounds after the ill-fated tour of The Baker's Wife closed out of town instead of coming to Broadway, she took a string of roles in short-lived productions both good and mediocre. It all led to her first movie role — one line in Steven Spielberg's war comedy 1941. The experience of being flown out to LA to shoot on the Universal lot is still etched into her memory.

"I didn’t know where I was going. I turned a corner just as the Klieg lights came on, and it put everything into negative in my eye — everything looked gigantic," LuPone recalls. "And I went, This is Hollywood. It was a magical experience. That’s where I wanted to stay."

LuPone's latest project has a similarly starry-eyed view of Tinseltown. Ryan Murphy's Netflix drama Hollywood, in which LuPone plays former actor and wife of a studio executive Avis Amberg, is a lushly crafted period piece that both reflects and rewrites the history of the Golden Age of film. But when it's LuPone's turn to be nostalgic for the past, she's unapologetically frank about the highs and lows of her early career. Below, LuPone reflects on her career choices, New York City's discotheques, and the controversy surrounding the Broadway debut of Evita.

I know exactly what happened. I went home, I slept for nine months after The Baker’s Wife [tour] because it was such a disaster, and I went back to my roots. I went back to working with David Mamet. We went to Chicago and we premiered his play The Woods. And then when I came back from that, I joined The Water Engine, another David Mamet play. We started out at The Public Theater, and then we moved into Broadway. That didn’t last very long, and then I went into Stephen Schwartz’s Working for Broadway, and that didn’t last very long! So I was in several flops right off the bat.

Somehow, I got an audition for Steven Spielberg’s only flop, 1941. And I went to California and had one line in the USO scene: “Say you, devil, how’s about a deviled egg?” Even though I was only in one scene, I was like well, something’s going right, I’m in a movie.

I had graduated from Juilliard, spent four years on the road with the acting company working, landed a Broadway-bound musical, continued working with Mamet — so it was a full time. A full time of really interesting work, whether it lasted or not. Some of it was shite, but some of it was really good, and once you’re on stage or anywhere, [actors are] hired hands: we can’t determine whether a show is gonna run or not.

Did you take it personally when things didn’t work out?

I thought I wanted to be a star — don’t we all? But I wasn’t terribly serious. I was a party animal. You know, truly, I wasn’t serious about my career. I assumed my career would happen. Which was lazy and kind of presumptuous on my part.

But then it did happen.

Uh uh. Well, I didn’t put a whole lot of thought into it.

Have your goals changed since?

You know what, I’m disappointed more often than not if I have a goal or if I have a plan. So in the course of the maybe last 10 years, I’ve sort of let the universe dictate my career. That way I’m not disappointed, and then what happens is what comes in is completely surprising. And that’s a better way to approach this business than to be constantly disappointed, because [acting is] the business of rejection. So if I leave it alone and stuff happens [for me], you go, "Excuse me, really?"

I think the biggest thing I splurged on when I was 30 was a piano. 28, nah, there wasn’t any money, so there was no splurging.

You fit a full piano in a New York City apartment?

In a New York apartment, yeah. It was a Baldwin upright. It was $11,000 of money I didn’t have, but I thought, you better have a piano if you’re playing Eva Perón [in Evita]. Go figure!

No. Because what I hit [it big] with was Eva Perón. There was so much controversy in Evita — there was so much controversy surrounding that production, because she was the regime, [and] they supported the Nazis. And the other aspect was that the New York theater community didn’t like the fact that two Brits [Andrew Lloyd Webber and Tim Rice] had usurped an American institution — the American musical.

There was a lot wrong with it, according to the people at the time. The music was weird, it wasn’t quite rock and roll, it wasn’t musical, and then my character was not necessarily likable, and so it was a difficult time for me. It was the thing I hit with, and then I had to figure out a way for people to see who I was, that I wasn’t this fascist dictator. And that was tough. That took several years.

On paper, Evita seems like your breakthrough moment. But it sounds like it didn’t feel that way for you.

It wasn’t at all. It wasn’t like Donna McKechnie in A Chorus Line on the cover of Newsweek and Time magazine at the same time. It was a musical that was vilified, and along with that, [my co-star] Mandy [Patinkin] and I were ignored.

Did winning a Tony for Evita feel like vindication?

Yes! Oh boy, did it ever. My best friend who I took with me [to the ceremony] said I did this and I don’t remember: When Faye Dunaway was announcing the nominees for Best Actress in a Musical, he said I slammed my purse into his lap and said, “Here, hold this,” as if I knew I was going to win! I don’t remember it at all.

What would your 28-year-old self say about what you’re doing now?

More like this
At 28, Debra Jo Rupp Was Living A Much Different '70s Show
By Grace Wehniainen
At 28, Rosie Perez Risked Her Career To Stop Playing Stereotypes
By Gabrielle Bondi
Ashton Kutcher Wants Danny Masterson “To Be Found Innocent” In Rape Retrial
By Jake Viswanath
'The Queen’s Gambit' Season 2 Tweet Wasn’t From Anya Taylor-Joy
By Mary Kate McGrath, Jack Irvin and Grace Wehniainen
Get Even More From Bustle — Sign Up For The Newsletter
From hair trends to relationship advice, our daily newsletter has everything you need to sound like a person who’s on TikTok, even if you aren’t.