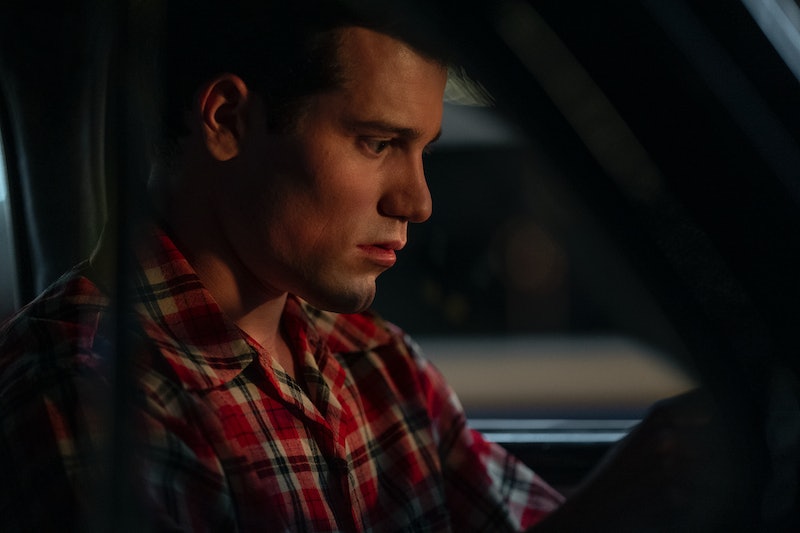 Saeed AdyaniI/Netflix
By Brad Witter
May 1, 2020

Spoilers ahead for Season 1 of Netflix's Hollywood. Ryan Murphy took a lot of creative liberties while making his new Netflix series Hollywood, particularly in regard to the accuracy of Rock Hudson's story. Most of his backstory is true, but the show makes one big change.

Played by Jack Picking, Hudson is one of the few characters directly based on a real person. He was born Roy Harold Scherer Jr. and did have a difficult upbringing in his hometown of Winnetka, Illinois — both facts represented in the Netflix series. When Hudson was a young boy, his father lost his job and went to California in search of work, refusing to return home to their family. Hudson's mother remarried when he was 8, but her new husband was physically abusive toward Hudson, as author Mark Griffin documented in All That Heaven Allows, his 2018 biography of the actor. "From an early age, [Hudson] learned that you could talk about pretty much anything – except what you truly felt and what you really wanted. Like a father," Griffin wrote, per USA Today.

In 1944, Hudson joined the U.S. Navy and served in the Philippines. Two years later, he was discharged and moved to Hollywood to pursue acting. He worked as a truck driver to pay the bills, but spent his free time hanging around studios and handing out headshots to execs. This caught the attention of talent agent Henry Willson (played by Jim Parsons in Hollywood), who made Hudson his protégé and gave him his stage name. Their relationship is also true to life: Willson was notorious for propositioning his clients for sexual favors in exchange for furthering their careers.

In 1948, Hudson nabbed his first role in Fire Squadron and appeared in several bit parts over the years. He didn't break through in earnest until he starred in Scarlet Angel in 1952 — four years after Hollywood takes place. This is where Hollywood's story begins to diverge most from real life.

Hudson was never in a movie called Meg or Dreamland — both fictional films featured in the show — nor, most significantly, was he able to ever live openly as a gay man. Whereas in the show, Hudson comes out with his boyfriend Archie at the 20th Academy Awards, Hudson remained closeted throughout his career. It wasn't until he died of AIDS-related complications in 1985 that his sexuality became public.

Furthermore, Hudson meets Archie at a gas station that serves as a sort of brothel in the show. But while so-called "male madame to the stars" Scotty Bowers did run a gas station with a similar set-up, there's no evidence that Hudson was a client, nor that he was ever involved with a man like Archie. Hudson's wife Phyllis Gates (who he married in 1955 and divorced three years later) even secretly recorded a 1958 conversation in which Hudson insisted he'd never picked up any men when she confronted him about it.

Overall, Murphy told the New York Post that while the real-life figures included in Hollywood are "accurate and heavily researched," the show is only "fifty percent" based on reality. And that certainly seems to be the case for Hudson.