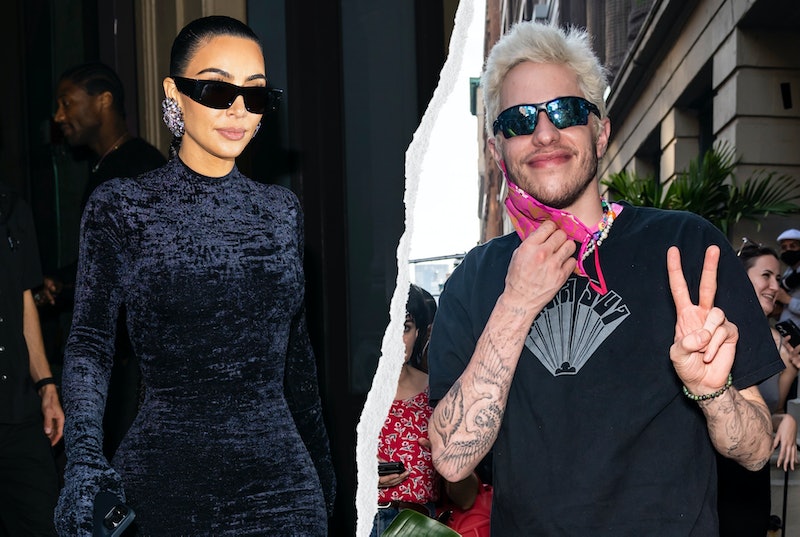 Though they haven’t actually confirmed that they’re coupled up, Kim Kardashian and Pete Davidson’s reported relationship continues to move quickly. Last month, they were merely playing Jasmine and Aladdin on Saturday Night Live — now, they’ve tackled the theme-park double-date, dinner in Staten Island, and a special birthday celebration with the family (replete with matching flannel PJs).

It’s a lot to keep up with, but Davidson’s SNL co-stars are doing their best — and from what they have seen, they seem to be pretty supportive. Chris Redd, Kenan Thompson, and Bowen Yang opened up about the rumored relationship to People during an appearance at the American Museum of Natural History’s 2021 Museum Gala Nov. 18, a day after Davidson and Kardashian were spotted holding hands in Palm Springs.

“I mean, you’ve got to be happy for love, I guess,” said Thompson, who referred to Davidson as his “little brother.” He made sure not to apply a label where he wasn’t sure one belonged, though, adding, “If it’s love! They look like they’re having a good time. ... I’m always happy when he’s happy.”

Yang also voiced his support and was just as careful to avoid labeling the relationship outright. “I don’t know what the nature of the friendship is, but it seems like they’re having a good time hanging out,” he told the magazine.

And for Redd’s part, well, he seemed pretty hyped for the budding couple. “Pete and Kim? Damn, Pete. Damn!” said Redd. He shared his hopes for their happiness, adding, “They’re wearing matching outfits so I think they’re on their way.” However, he indicated that he’s speculating with the same intel as everyone else: “That’s what Instagram told me.”

The duo was “very affectionate” during Davidson’s birthday celebration on Nov. 16 “and seem more serious,” according to a People source. The insider added that the comedian is “very sweet to Kim” and she is “smitten.”

Though Redd, Thompson, and Yang are the first SNL stars to address Davidson’s rumored relationship this time around, the King of Staten Island star’s dating history has been broached in past interviews. Earlier this year, Howard Stern asked Michael Che whether he felt the pressure to find a famous partner after Davidson and Colin Jost’s respective high-profile romances — but he said he’d much rather meet “a nice, boring librarian.”

“It’s so much harder for two famous people to get together and combine forces of attention and press and constant scrutiny,” he said. “It’s hard. It’s a very, very hard thing to do. Like, if you’re in love, and it’s beautiful, I totally get it, but ... that seems like so much work.” Che acknowledged, though, that working on SNL does tend to pave the way for potential relationships. “You get to be a regular person, and you get to see people for who they are here,” he explained. “But outside of that is the industry. ... It’s exhausting.”

That’ll be a challenge for Davidson and Kardashian to face... if it’s love.

More like this
Kim Kardashian Gives “Bucket List Dream” Lecture At Harvard
By Alyssa Lapid
Khloé Kardashian Writes Touching Instagram Tribute To Tristan Thompson’s Mother
By Alyssa Lapid
Molly-Mae & Tommy Fury Revealed Their Baby Girl's "Really Unusual" Name
By Sophie McEvoy and Sam Ramsden
RHOP’s Robyn Dixon Explained Why Juan Paid For Another Woman's Hotel Room
By Brad Witter
Get Even More From Bustle — Sign Up For The Newsletter
From hair trends to relationship advice, our daily newsletter has everything you need to sound like a person who’s on TikTok, even if you aren’t.