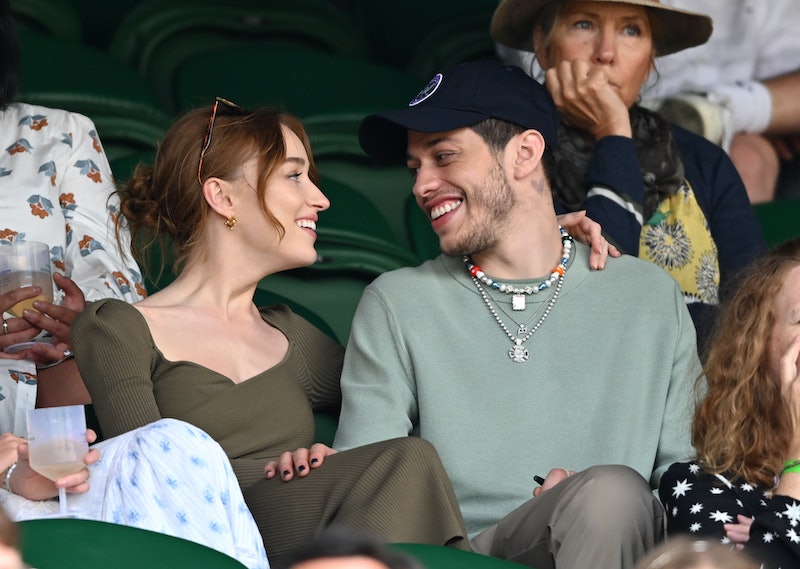 Apparently the “love” at Wimbledon isn’t confined to the tennis courts. Following months of dating rumors, Phoebe Dynevor and Pete Davidson made their relationship public at the famed London tournament on Saturday, July 3. While sitting in the stands during Roger Federer’s match against Cameron Norrie at the All England Lawn Tennis and Croquet Club, the couple was photographed cuddling, kissing, and sharing plenty of laughs.

Dating speculation first began in March when Davidson was spotted in Manchester, England, where the Bridgerton star lives. In April, they were seen together for the first time during a casual arm-in-arm stroll around the city, and, soon afterward, People confirmed they were indeed in a relationship. “Pete is telling friends he’s serious about her,” a source close to the Saturday Night Live star told the magazine at the time, adding that they’re “really into each other.”

Around the same time, Us Weekly also confirmed their relationship status, with another insider explaining how they were navigating the long-distance courtship. (Dynevor was filming Bridgerton Season 2 in the United Kingdom at the time, while Davidson remained stateside to perform on SNL.) “Pete and Phoebe are still going strong despite not being able to physically spend time together,” a source told the outlet in April. “They keep in touch over text and FaceTime. Right now, they’re just focused on work. … They’re not looking to rush things.”

At Wimbledon, they took advantage of their time in the same place, leading to some very lovey-dovey photos.

As for what makes them work so well together, Us Weekly’s insider further explained that Davidson’s sense of humor had won over the actor: “They’re happy with each other. He makes her laugh. Pete is a good guy and definitely a charmer. He’s easy-going and fun to be around.” Meanwhile, Davidson coyly hinted at his relationship with Dynevor during an April Zoom call, mentioning he was with his “celebrity crush.”

Following his short-lived 2018 engagement to Ariana Grande, Davidson has been linked to such stars as Kate Beckinsale, Margaret Qualley, Kaia Gerber, and Cazzie David. Dynevor, for her part, has dated recruitment executive Simon Merrill and Skins alum Sean Teale. Though fans previously speculated that she and her Bridgerton co-star Regé-Jean Page had taken their love off screen, they ultimately shut down the rumors.

After this Wimbledon outing, there can hardly be any question of who burns for Dynevor in real life.