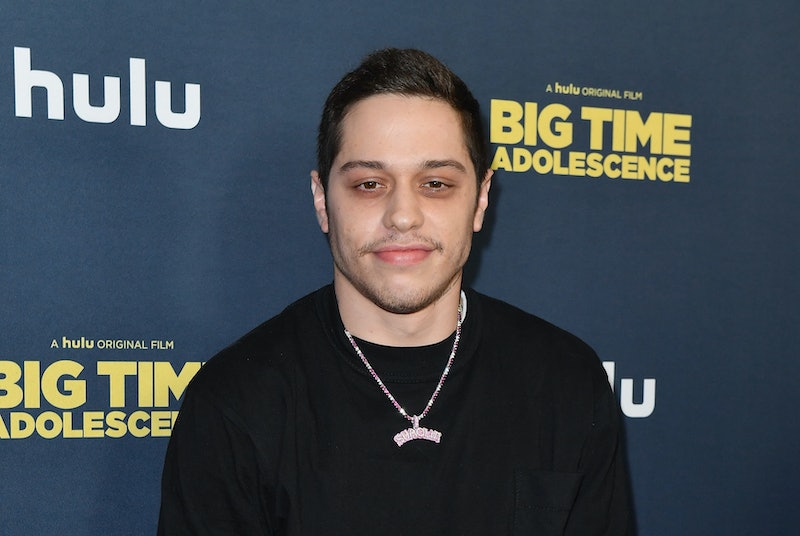 Just when you thought 2020 couldn't hurt you anymore, SNL rolls up with Pete Davidson dressed as the Grinch in the final episode of the year and freaks everybody out. After Davidson was absent for the entire first hour of the Kristen Wiig-hosted episode on Dec. 19, fans finally learned where he'd been when the actor emerged in an elaborate — some would say nightmare-inducing — Grinch costume and makeup that must have taken the entire show to assemble. But this wasn't the Grinch you grew up with — this was a nasty Grinch.

The sketch takes place the day after the Grinch has saved Christmas, and begins with two Who children (Chloe Fineman and Kyle Mooney) reminiscing about the previous night's events. Their parents (Wiig and Mikey Day) then come downstairs and reveal that they had fun but drank a little too much "Who Punch" the night before. The Grinch (Davidson) then comes downstairs to join the family, and it's soon revealed that the green furry creature had a threesome with the two Who parents, as Wiig's character states that "his heart wasn't the only thing that grew three sizes" last night. It was definitely a disturbing sketch, but the most surprising thing about it was that a lot of people on Twitter seemed to think Davidson's Grinch was hot.

Twitter user @primcesspeach tweeted, "Pete Davidson sexy Grinch question mark!?," but others weren't so wishy-washy when it came to sharing their thirst for the Whoville outcast. "Pete Davidson Grinch was hot," wrote @honeypieabed. Going even further was @poes_daughter, who tweeted, "I’ve never been sexually attracted to the Grinch before but thanks to Pete Davidson, here we are #SNL." Here we are indeed — 2020, what have you done to us?

Whether you found Pete Davidson's version of the Grinch sexy or just disturbing, the sketch was unquestionably the perfect way for SNL to send off the wild year that was 2020.

More like this
‘SNL’ Finally Spoofed Nicole Kidman’s Weirdly Beloved AMC Ad & Nailed It
By Stephanie Topacio Long
These Memes & Tweets About Alicent in 'House Of The Dragon' Prove She's The Queen Of Messiness
By Grace Wehniainen
How Much Are The 'Schitt’s Creek' Stars Worth?
By Hugh McIntyre
The ‘Kevin Can F**k Himself’ Season 2 Finale Twist Is A Full Circle Moment
By Grace Wehniainen
Get Even More From Bustle — Sign Up For The Newsletter