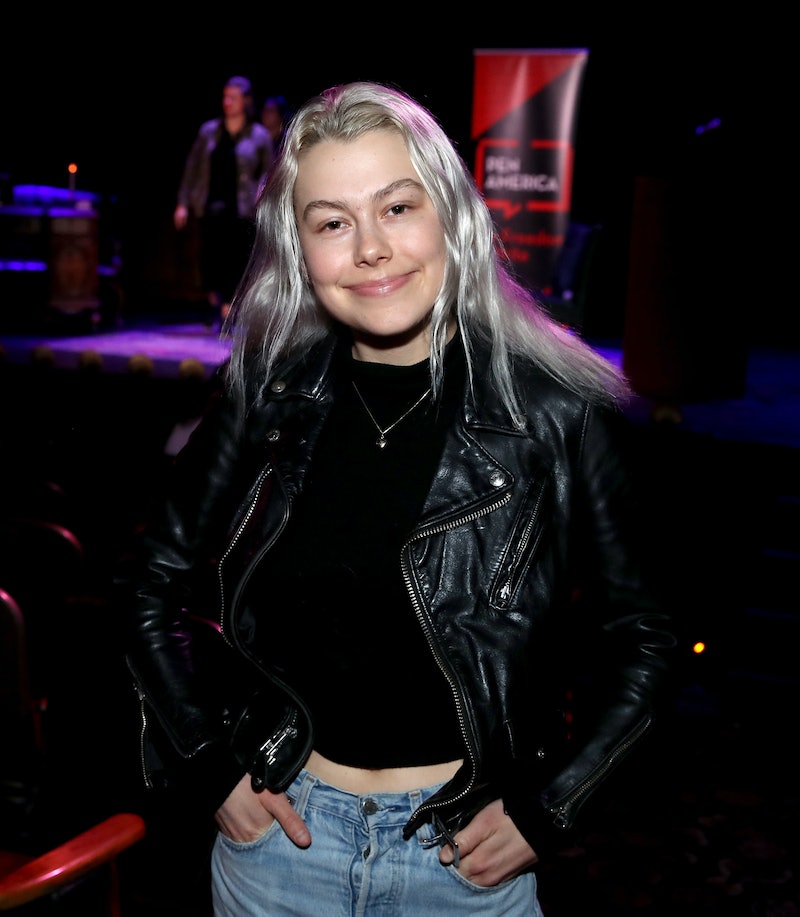 Ever since Phoebe Bridgers' Grammy-nominated album Punisher was released last summer, the singer/songwriter has received countless comparisons to Taylor Swift. Fans often liken the two artists to one another for their shared confessional lyricism and impeccable guitar skills, and they tend to do so through tongue-in-cheek Twitter memes like "phoebe bridgers is taylor swift for girls who have crumbs in their beds." In her new Nylon cover story, Bridgers candidly spoke of the similarities and why she has no problem embracing them.

“I think it's a totally fair and cool comparison,” Bridgers told Lauren McCarthy, Nylon's executive editor. “It used to be a shock to people that I liked Taylor Swift,” the "Kyoto" singer dished, noting that she'd "love to" meet Swift at some point. While the two musicians have never formally met, they share some collaborators, including The National's Aaron Dessner and Matt Berninger as well as Bon Iver's Justin Vernon. Bridgers continued, “I think she is the perfect example of the way that privilege is both really lucky, but also you have to be naturally talented... and you have to be a great writer, and I've always thought she was.”

This isn't the first time Bridgers has revealed herself as a Swiftie. Back in March, she thanked Swift for including one of her tracks in her "Playlist by ME!" on Apple Music for International Women's Day, joking that she must be in a "purgatory hallucination."

Bridgers also embraces the hilarious Twitter memes that compare the two artists. When folklore debuted in July 2020, she retweeted a post by user @_lhynes that read: "phoebe bridgers is taylor swift for girls who hate themselves." Then, she posted a similar tweet comparing one of her Punisher tracks to Swift's country-tinged "Betty."

In a December 2020 interview with Consequence of Sound, Bridgers admitted there's a bit of truth to the memes. "I really liked 'Taylor Swift is Phoebe Bridgers for people whose parents still love each other.' That was my favorite one," she remarked. "Or 'Phoebe Bridgers is Taylor Swift for girls who have crumbs in their bed.' I have crumbs in my bed, so it makes sense. No, I like those memes."

Now that this year's Grammys have been postponed until March, the Swifties and Pharbz (yes, that's what Phoebe Bridgers' stans call themselves) need to hold a manifestation session to get the two multi-nominated artists onstage for a duet.