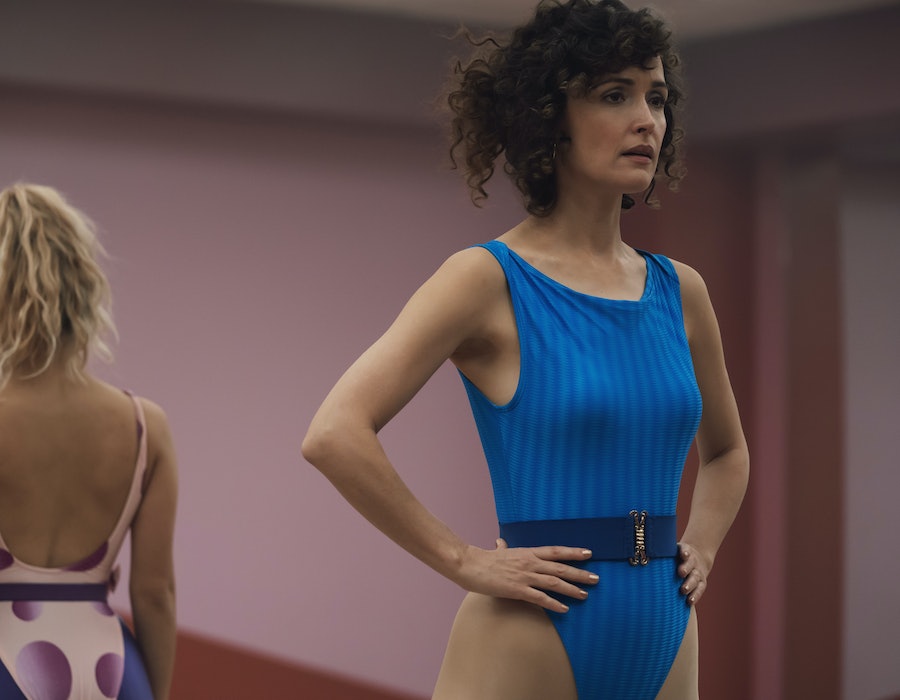 We know how Sheila Rubin sees herself before we know much of anything else about her. “Wrinkles and zits, that’s a real sexy cocktail you’re serving up,” she tells herself dryly in the opening moments of Apple TV+’s new dramedy Physical, narrating a stream of negative self-talk as she studies herself in the mirror. Later, we learn that she’s a bored ‘80s housewife coping with disordered eating while trying to support her family and her husband’s state assembly run. As she goes about her day — dodging invitations from moms to grab a bite, contemplating her workout plan — the internal monologue is ever-present.

“That was the earliest impulse with [Physical]. I wrote it being like, ‘Yeah I’m just gonna tell the truth about how I talk to myself on the inside that I would never admit,’” Physical creator Annie Weisman tells Bustle of basing elements of the show on her own experience hiding an eating disorder. “The thing I’m most ashamed of — [how I talk to myself internally] — is the thing that connects me most [to] everybody else.”

Though intrusive thoughts like Sheila’s aren’t often depicted in pop culture, they’re quite common to those experiencing disordered eating or eating disorders, which affect 9% of the population worldwide and 65% of American women. Physical doesn’t shy away from showing how much Sheila’s disordered eating behavior colors her external world, but it’s her inner monologue that acts as gas to the flame of every issue in her life. Brenna O’Malley, a registered dietician and the founder of online non-diet community The Wellful, says representation like this is vital to showing that disordered eating affects people well beyond mealtimes, and can in fact “intersect and overflow and really interfere in you showing up and being present in other areas.”

Weisman was careful to focus on the more subtle ways Sheila’s disordered eating behavior reverberates throughout her life, rather than show direct images of her binging and purging. When Sheila moves between mirrored rooms that might trigger her issues with body image, for example, the camera is erratic and abrupt. “You can understand she’s going through something — this obsessive, private, personal struggle,” Weisman says. “[The focus is] on the emotional truth and not the more lurid aspects of her behavior, that was important to me.”

Conversely, Physical uses tight shots and quick movements to capture how engaged and powerful Sheila feels when she takes her first aerobics class. Like Sheila, Weisman found that exercise helped to silence her inner monologue, enabling her to “harness that [feeling] and turn it into this fierce voice out in the world.”

Unlike Weisman, however, Sheila is far from out of the woods. Though exercise can aid in recovery from eating disorders and disordered eating — helping people to get back in touch with their body and boosting feel-good neurotransmitters — it can intersect with disordered eating habits in harmful ways too.

“It can also be used as a punishment, so you’re kind of punishing yourself for what you’ve eaten, and you think you don’t deserve it unless you’ve burned enough calories or run X amount of miles,” says Jacqueline Stone, a registered dietician based in Miami, Florida. In Physical, exercise “[quiets Sheila’s] voices a little bit, but likely for the wrong reason,” Stone adds. “There’s that pervasiveness, that intrusiveness, but instead of being obsessed with food and calories, [she] becomes obsessed with movement.”

This nuanced approach is what makes Physical distinct from other depictions of disordered eating in pop culture. As a young, thin, cisgender white woman, Sheila still embodies an overrepresented archetype in media, but her behavior isn’t limited to food, body image, or even her mood. Over and over again, the show makes clear that her disordered eating is not only a complicating factor in her life but a means for control and a hazardous coping mechanism. Weisman hopes this brings more understanding to the aspects of disordered eating that haven’t yet broached mainstream conversations, and helps people to realize how nebulous and pervasive these disorders can be.

“We’re always putting this pressure on ourselves to not admit how we really feel,” Weisman says. “In my own experience, and from a lot of other women I talk to, eating disorders really thrive in isolation, they thrive in secrecy. So once you kind of get connected to other people, it shines light in these corners and it starts to dissipate its power.”