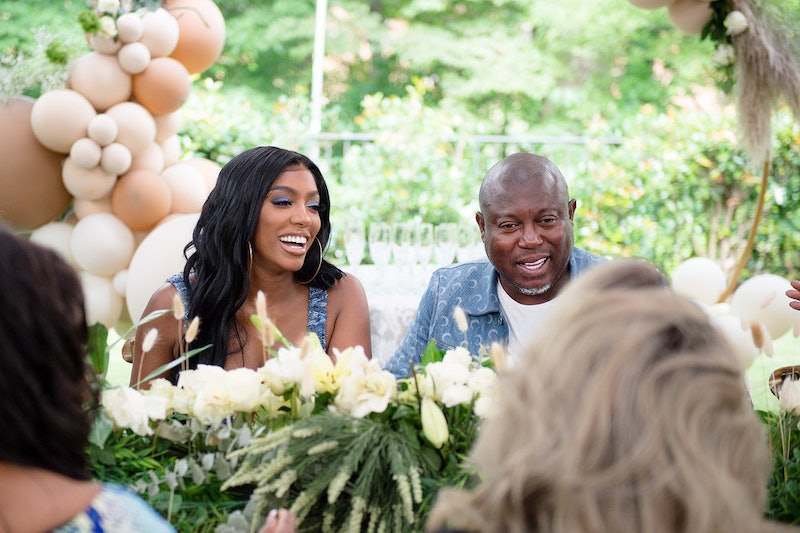 Porsha Williams’ family had a lot of questions for her about her whirlwind engagement to Simon Guobadia. In the trailer for her new Bravo series Porsha’s Family Matters, one relative inquires why Simon’s “previous three marriages did not work,” while another gripes that they “had to find out about [the relationship] on TV.”

Fans of the Real Housewives of Atlanta star had a similarly baffled response when Porsha revealed that she was not only dating but also engaged to Simon less than a week after he announced his divorce from her RHOA costar Falynn Guobadia. All parties have denied that Porsha had anything to do with Falynn and Simon’s split, but as Porsha acknowledged in the premiere of Family Matters, the “optics don’t look great.” She added that she was frustrated because “people don’t have all the facts” and were assuming that Simon had left Falynn for her. Now that we do know what happened, here’s a breakdown of the messy timeline of events.

As Porsha explained to her sister Lauren, she met Simon and Falynn at a (since-closed) restaurant he owned in Atlanta prior to Falynn’s pool party in RHOA Season 13. Falynn later added on Kandi Burruss’ Speak On It web series that she was introduced to Porsha because Simon is friends with Dennis McKinley, Porsha’s on-again, off-again ex and the father of her 2-year-old daughter PJ.

After five years together and two years of marriage, Falynn and Simon announced their divorce on Instagram in April. “Falynn and I have made the mutual decision to end our marriage,” Simon’s post read. “Despite our willingness to be transparent, we respectfully ask for privacy at this time.”

In the premiere of Porsha’s Family Matters, Simon explained that his relationship with Porsha started after she DMed him to make sure he was doing OK following the divorce announcement. “I appreciated it, and the rest of it is history,” he said.

After reaching a final settlement with Falynn, Simon filed a motion to grant their divorce on May 5. Less than a week later, Porsha confirmed she and Simon had been dating for a month. “I know it’s fast but we are living life each day to its fullest,” she captioned a May 10 Instagram announcement, insisting that she and Falynn are “not friends” and that Simon’s divorce had been settled. “I choose happiness every morning and every night. Tuning out all negative energy and only focused on positive wishes. He makes me so happy and to me, that is what matters most.”

The following day, Simon revealed he and Porsha were engaged. "I asked her to marry me because we checked ALL of each other's boxes, and then some," the entrepreneur wrote on Instagram. “Getting married again was never a question in my mind, but when. Did not expect to be blessed with a mate so soon.”

Porsha later said on her Dish Nation radio show that they’re planning three wedding ceremonies. “He’s African, so we’re going to have a native law and custom ceremony, and a regular wedding, and then we’re going to have another wedding at one of [our] houses that is out of the country,” she explained. She then shared the clip to Instagram, writing, “Three weddings and a funeral for the haters.”

Falynn announced in her Instagram Stories that she and Simon were officially divorced, leaving the door open for him and Porsha to move forward with their wedding plans. Since then, the couple has been enjoying their engagement. They recently attended Simon’s first-ever World Series game, as well as took a trip to Nigeria.

Falynn also moved on to a new relationship. In August 2021, she announced she was expecting a baby with boyfriend Jaylan Banks. The two got engaged two months later, in October. Then, on Nov. 26, Falynn and Jaylan welcomed a “beautiful and perfectly healthy” baby girl named Emma Sang Pina.