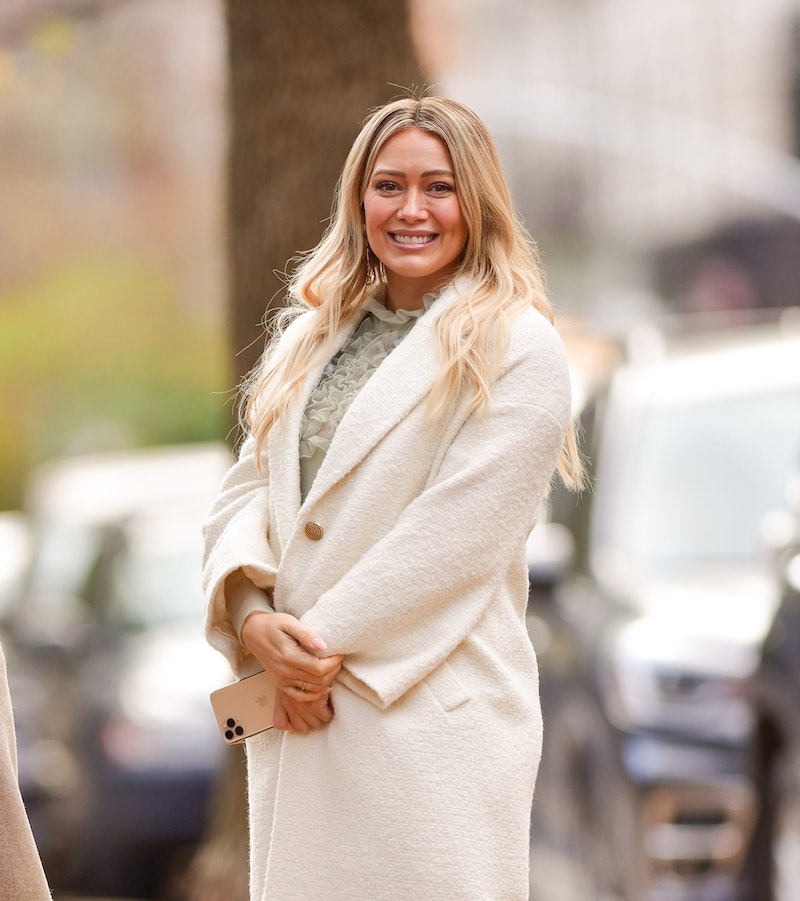 In yet another 2020 setback, expectant mom Hilary Duff was "exposed" to the novel coronavirus, the actor revealed in a Saturday, Nov. 21 Instagram story. Duff, who announced last month that she's pregnant with her third child, posted a selfie of herself in a gray hoodie, along with a text overlay that read, "Exposed to covid Quarantine day 2 Fml." In a subsequent post, she shared that she was alone reading Cazzie David's book No One Asked for This.

Duff has been filming Younger Season 7 all week in New York City, according to People. Recent photos showed the actor shooting scenes with co-star Sutton Foster and also wearing a mask between takes, after production on the TV Land series resumed in October. The Darren Star-created show had reportedly been slated to begin production in early 2020 but was among the projects affected by the sweeping COVID-19 pandemic shutdowns earlier this year.

"The latest date I've heard was March 2021 to start shooting again, so at least we have a date, and they're still planning on it," Duff told Insider in July. "I miss my Younger family for sure." Her co-stars on the show also include Nico Tortorella, Peter Hermann, Miriam Shor, Debi Mazar, Molly Bernard, and Charles Michael Davis. Unfortunately, their return to set has apparently taken a scary turn.

Duff is due sometime next year; she and musician husband Matthew Koma announced they were expecting their second child together on Oct. 24. (They share 2-year-old daughter Banks Violet, and Duff is also mom to 8-year-old son Luca Cruz, with ex-husband Mike Comrie.) "We are growing!!! Mostly me," Duff wrote in an Instagram post, at the time. For his part, Koma captioned a post on his page, "lol quarantine was fun. Baby #3 - 2021," geotagging their location as "Pregnantville."

Shortly after Duff shared her coronavirus exposure news, she posted an Instagram photo of her children cuddling and sleeping next to each other in a vehicle. "I must have done somethings [sic] right," she captioned the shot. In the comments section, Koma joked, "Yeah. It’s called Melatonin."

Maybe that — and her reading material — will help the star during the remainder of her quarantine.