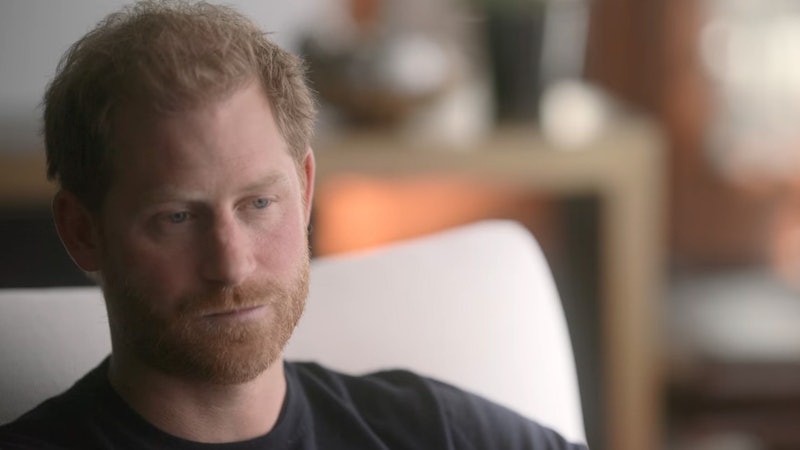 For the most part, Netflix’s Harry & Meghan documentary revisits the past six years of Prince Harry and Meghan Markle’s relationship, which began when a mutual friend set them up in 2016. However, the new documentary, which premiered on Dec. 8, also dedicates some time to Harry’s and Meghan’s respective journeys before meeting each other — including one particularly controversial moment from Harry’s past.

In 2005, Harry attended a party dressed in a Nazi costume. “It was a poor choice of costume and I apologize,” he said in a statement at the time, per The New York Times. However, it wasn’t until 17 years later that the Duke of Sussex discussed the offensive costume in detail.

“In this family, you know, sometimes you’re part of the problem rather than part of the solution,” he says during the new doc. “And there is a huge level of unconscious bias.” Harry went on to explain that fighting that bias is a “constant work in progress for everybody, including me,” and he cited the example of his Nazi costume incident — and what he did to make amends after.

“It was probably one of the biggest mistakes of my life,” he says. “I felt so ashamed afterwards. All I wanted to do was make it right. I sat down and spoke to the chief rabbi in London, which had a profound impact on me. I went to Berlin and spoke to a Holocaust survivor. I could’ve just ignored and gone on, and probably made the same mistakes over and over in my life. But I learned from that.”

It’s been speculated that Harry might also address the 2005 costume in his forthcoming memoir, Spare. In 2020, royal biographer Omid Scobie predicted on True Royalty TV that Harry would acknowledge the incident someday, but “he’s still educating himself,” and “maybe he feels he’s not there yet.”

Meanwhile, royal historian Robert Lacey claimed the same year that the incident might have played a role in Prince William and Harry’s reported rift later on. In a book excerpt featured in the Daily Mail, Lacey claimed that the brothers chose their costumes “in conjunction,” but William did not receive the same criticism. “The young prince began re-evaluating his elder brother’s involvement and the unfairness of William’s subsequent emergence smelling of roses,” adding that “it made Harry feel resentful and even alienated.”

More like this
'The Crown' Season 6 Has Suspended Filming "Out Of Respect" For The Queen's Death
By Bustle Staff
A Royal Lie: Harry Reveals The Truth About Princess Diana’s Ring
By Marina Watts
Prince Harry Incorrectly Recites Christina Aguilera’s “Genie In A Bottle” Lyrics
By Jake Viswanath
I Read Prince Harry's 'Spare' So You Don’t Have To: 11 Highlights To Know
By Marina Watts
Get Even More From Bustle — Sign Up For The Newsletter
From hair trends to relationship advice, our daily newsletter has everything you need to sound like a person who’s on TikTok, even if you aren’t.