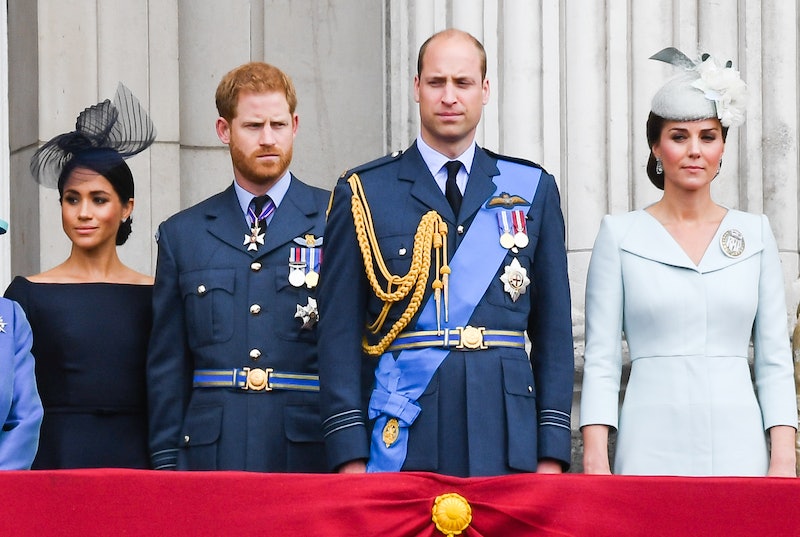 During the bombshell interview between Meghan Markle, Prince Harry, and Oprah Winfrey, the couple revealed the lead-up to their exit from royal life in early 2020. There were toxic dynamics regarding Meghan's mental health, conversations surrounding the birth of Archie, and a decades-old agreement between the royal family and British press. To that end, Prince Harry detailed the royals' relationship with UK tabloids during the interview. "My father and my brother, they are trapped. They don't get to leave," he explained of his family's relationship to the monarchy. "And I have compassion for that." The prince went on to add, "I was trapped but didn’t know I was trapped."

The 36-year-old then explained the pain he felt when members of his family, including Prince William and Kate Middleton, didn't defend his wife in the press. "No one from my family ever said anything over those two years… that hurts," he said before sharing a glimpse behind the curtain of the royals. "I am acutely aware of where my family stands and how scared they are of the tabloids turning on them," Harry revealed, adding, "There is this invisible… the invisible contract between the institution and the U.K. tabloids. To simplify, if you as a family member are willing to wine, dine, and give full access to these reporters, then you are able to get better press. Everyone needs to have some compassion for them [the royals] in that situation."

Oprah then asked Harry, "Who is controlling whom?" to which he replied, "The institution survives based on that perception... one lives and thrives because the other exists." Meghan chimed in, adding, "There's a reason the tabloids have holiday parties at the palace. "There's a construct that's at play there." As for the role Meghan's race played in negative media coverage of her, she noted, "It changed the risk level." Adding that "it wasn’t just catty gossip," she said "it changed the level of threat" and "it changed the level of death threat."

Despite the couple's harmful experience inside the palace walls, Meghan and Harry's Oprah tell-all ended on a positive note. When asked if Meghan had saved Harry from his trappings in royal life, he said: "Without question, she saved me." Meghan responded, "I’d have to disagree. He saved all of us. He made a decision for me, for Archie. He saved all of us."

More like this
Prince Harry Incorrectly Recites Christina Aguilera’s “Genie In A Bottle” Lyrics
By Jake Viswanath
Kate Middleton Wore The Ultimate '90s Power Suit
By Sam Ramsden
Meghan & Harry Respond To Jeremy Clarkson’s "Apology" Over *That* Column
By Sophie McEvoy
Here’s Why Tyler Perry Helped Prince Harry & Meghan Markle When They Moved
By Marina Watts
Get Even More From Bustle — Sign Up For The Newsletter
From hair trends to relationship advice, our daily newsletter has everything you need to sound like a person who’s on TikTok, even if you aren’t.