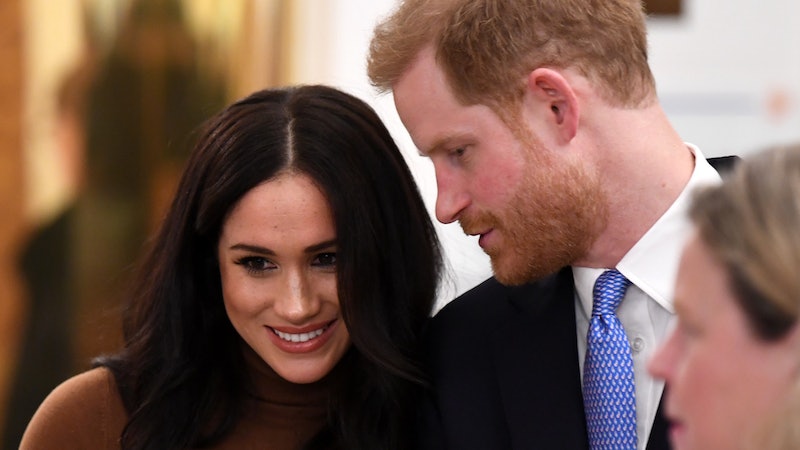 After the announcement that Prince Harry, Duke of Sussex, and Meghan, Duchess of Sussex, would be stepping down from royal duties, the future of their position in the British monarchy has been the centre of widespread public debate. It was later revealed that in addition to moving to Canada, the pair will no longer receive public funds, and will be dropping their HRH titles. But what will Meghan and Harry be known as now they aren't HRH?

Speaking to Sky News, one palace source revealed that the royal family are continuing to figure out what the Duke and Duchess of Sussex will become known as in the future. On Saturday (Jan. 18), after their decision to drop the rank of His or Her Royal Highness, it was announced the couple would now be referred to as "Harry, Duke of Sussex" and "Meghan, Duchess of Sussex." However, it later emerged that the comma used in Meghan's official title normally equates to that of a divorced woman — for example, Diana, Princess of Wales and Sarah, Duchess of York. In a statement, Buckingham Palace later told Sky News the title was stated incorrectly, and will confirm the style of Harry and Meghan's updated titles in due course.

Speaking of the latest royal predicament, Sky's events commentator, Alastair Bruce, explained that the palace's announcement in regards to what Meghan will now be called inadvertently gave out "all the wrong messages," and because of the apparent mishap, the Duchess' title will now be "revisited."

Although we're still waiting on that next announcement, one senior member of the royal household, Thomas Woodcock, Garter King of Arms, has expressed his view that both Harry and Meghan should be prevented from using the Sussex royal brand in the future. As the Mirror reports, Woodcock's role includes ensuring that royal symbols are not used for commercial gain, and speaking to The Times, the royal aide stated that it would not be "satisfactory" for the couple to use the Sussex royal title on their official website — before insisting that although advising the palace, these are merely his own personal views.