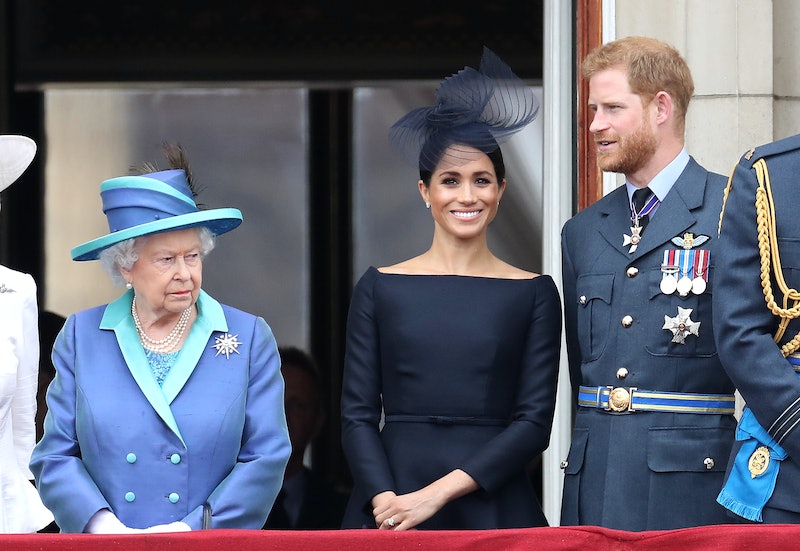 It's safe to say the royal family's relationship with Meghan Markle and Prince Harry is more strained than ever following their interview with Oprah Winfrey. Leading up to the Sussexes' two-hour chat with Oprah, which aired on Sunday, March 7, on CBS, they made numerous headlines for a multitude of issues, and reports about the couple extended way beyond their announcement to step back from royal duties in January 2020. Meghan and Harry's complicated relationship with the rest of the royal family and the intense scrutiny they continue to face was outlined during the interview in great detail.

This included Meghan’s severe mental health struggles, Harry’s frayed relationship with both his brother, William, and father, Charles, and conversations with the royal family about the color of Archie’s skin. At one point, Harry even revealed the fear the royal family has of getting negative press coverage. "I am acutely aware of where my family stands and how scared they are of the tabloids turning on them," he shared. "There is this invisible… the invisible contract between the institution and the UK tabloids. To simplify, if you as a family member are willing to wine, dine, and give full access to these reporters, then you are able to get better press. Everyone needs to have some compassion for them [the royals] in that situation."

Revelations from the interview sent the British press into overdrive, even prompting remarks from Prime Minister Boris Johnson that he’s “not commenting on royal family matters.” In the wake of the CBS sit-down, attention shifted to the royals’ reaction to what Meghan and Harry divulged to Oprah, and how their comments might impact the monarchy’s future. In the aftermath, the royal family reportedly began searching for a diversity chief, Buckingham Palace sources told Harper’s Bazaar at the time.

Here's what we know about how the royals responded to the CBS television special:

What does Buckingham Palace and the Queen think of Meghan and Harry's interview?

What Harry and Meghan decide to do with their careers and what they tell the media is their right, and Buckingham Palace said just as much ahead of the interview. In a statement, the palace expressed, "The Duke and Duchess are no longer working members of the royal family and therefore any decisions they take with regard to media commitments are matters for them. As non-working MRF they are under no obligation to inform the Royal Household of such plans."

“The whole world is in chaos, not to mention the family with Prince Philip in the hospital, that is solely what the family is focused on,” a source told Elle about whether or not the royal family would be watching Meghan and Harry’s interview. The outlet also reported that “several other members of the family also will not be tuning in” in addition to the queen. A source confirmed to Vanity Fair that the queen hadn’t watched the interview, and instead was “briefed by aides over breakfast Monday morning.”

On Tuesday, March 9, Buckingham Palace released an official statement on behalf of the Queen. It read:

“The whole family is saddened to learn the full extent of how challenging the last few years have been for Harry and Meghan. The issues raised, particularly that of race, are concerning. While some recollections may vary, they are taken very seriously and will be addressed by the family privately. Harry, Meghan and Archie will always be much loved family members.”

Then, sources began suggesting that Buckingham Palace would name a diversity chief to its royal staff. “This is an issue which has been taken very seriously across the royal households,” the source said in reference to Buckingham Palace, Kensington Palace, and Clarence House. “We have the policies, the procedures, and programs in place, but we haven’t seen the progress we would like and accept more needs to be done. We can always improve. Therefore, we are not afraid to look at new ways of approaching it. The work to do this has been underway for some time now and comes with the full support of the family.”

Not much is known about what this new person’s role will look like, but the chief will reportedly “assess and improve” the palace’s views on inclusion. “We take a broad view on diversity,” the source told Harper’s Bazaar. “This includes LGBTQI+ and disability representation.” There’s also no timeline for when the chief will be announced, but the source ensured that, “We are listening and learning to get this right.”

However, in June 2021, reports emerged that Buckingham Palace had shelved plans to hire a diversity chief. Speaking to Harpers Bazaar, a royal insider explained that “Her Majesty and the royal family have promoted and embraced the diversity of our nation and that of the Commonwealth” and recognised that the palace workforce “needs to reflect the communities we serve.”

“We recognize we are not where we would like to be and that despite all our efforts to target recruitment, train managers, and build an inclusive workplace, the results have not been what we would like,” the source added.

What do William and Kate think of the Oprah interview?

When asked whether he had spoken to his brother since the Oprah Winfrey interview, the Duke of Cambridge said: "No, I haven't spoken to him yet but I will do." ITV royal correspondent Chris Ship said the statement was “unprecedented” for a senior royal “and shows the fight they now have on their hands to repair their reputation following Meghan and Harry’s explosive claims.”

According to a pre-interview report by Us Weekly, the Duke and Duchess of Cambridge were "appalled" by Harry and Meghan's Oprah interview. A source told the magazine, "It's just beyond the pale for William and Kate, especially in light of the dreadful timing with [Prince] Philip in the hospital. They are utterly aghast."

However, even with William and Kate's reported disapproval and the tense relationship between the brothers’ and sisters-in-law’s, the couple didn’t expect Harry and Meghan to criticize them. "They won't talk negatively about Prince William and Duchess Kate," said a second source.

What has the rest of the royal family said about the tell-all?

Sources tell Vanity Fair that the queen, Prince Charles, and Prince William were “very concerned” about fallout from the blockbuster interview. Additionally, household staff were reportedly “shocked by the severity of the allegations” lodged by Meghan and Harry. “The various households will be locked in crisis meetings for most of Monday as they work out the next steps,” VF’s Katie Nicholl reported.

Prior to the interview, Us Weekly reported that William and the queen were "furious" about the interview because they "feel that by sharing [Harry and Meghan’s] side of the story, the entire royal family will be painted in an unfair way." Vanity Fair similarly reported about the feelings of Prince Charles, with a friend telling the outlet that Charles was “in a state of despair” over the interview.

During an interview with the Telegraph in July 2021, Sarah Ferguson was asked about her thoughts on the bombshell interview. The Duchess of York recounted her own experience of being interviewed by Oprah, revealing that she is a “great supporter” of Winfrey and “everything that she does.” As for Harry and Meghan, Ferguson explained that she “wouldn’t presume” to offer the couple any advice following their CBS sit-down, except to say to “be happy.”

As the Daily Mail reports, Ferguson’s two daughters, Princess Eugenie and Princess Beatrice, are said to be quite sympathetic over their cousin Prince Harry’s decision to speak out during the Oprah tell-all, with one royal source claiming the sisters believe Harry is “finally being listened to.”

This article was originally published on March 7, 2021