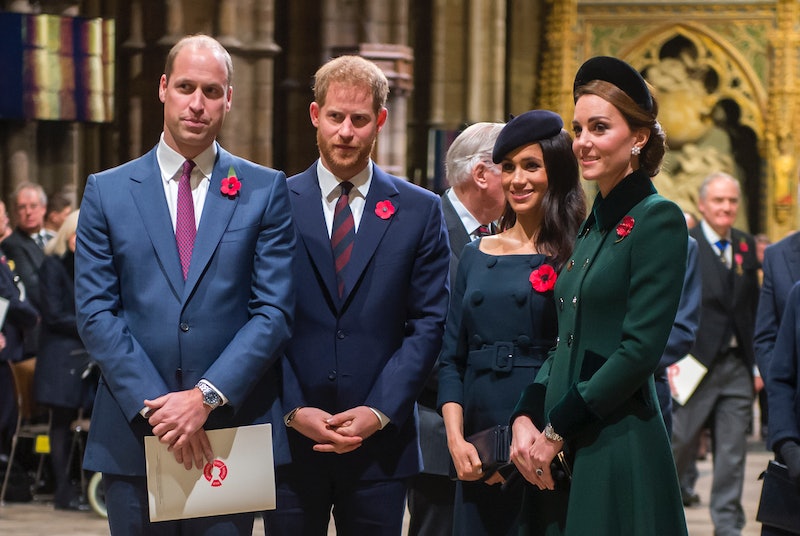 There may be a tell-all book on the horizon, and reports of secret bitterness and conflict behind closed doors running wild, but that isn't stopping Prince William and Kate Middleton from wishing Meghan Markle a happy birthday on social media. The Duke and Duchess of Cambridge sent Meghan a celebratory message on Tuesday, Aug. 4, in an Instagram post, featuring a photo of Meghan smiling and greeting a child. "Wishing a very happy birthday to The Duchess of Sussex today," wrote the official @kensingtonroyal account.

And they aren't the only members of the royal family to mark the occasion of Meghan's 39th birthday. The official Royal Family Instagram also shared a birthday tribute to Meghan, featuring a photo of her standing with the Queen. And the official Instagram account of Prince Charles and Camilla, Duchess of Cornwall, celebrated with a post of their own.

The birthday wishes may be sweet, but there are many reports of tensions behind-the-scenes in the royal family, particularly as it pertains to Meghan and Prince Harry's decision to step back from the royal family, and the upcoming book, Finding Freedom: Harry and Meghan and the Making of a Modern Royal Family. Written by two royal correspondents, Omid Scobie and Caroyln Durand, the book won't hit shelves until Aug. 11, but excerpts making the rounds have already caused some controversy.

The first Finding Freedom excerpt released in late July focused on the reported feud between Harry and William, claiming that their relationship began to suffer when William disapproved of his brother's new American girlfriend. According to Scobie and Durand, William even told Harry to be careful with Meghan and "take as much time as you need to get to know this girl," but his words apparently rubbed Harry the wrong way. Per The Hollywood Reporter, the new book also attempts to clarify the reports of a feud between Kate and Meghan, which the authors suggest was overblown in the press. However, they also make clear that Kate and Meghan are far from the best of friends, which will undoubtedly make avid royal watchers pay particular attention to this recent Instagram post.

Regardless of any personal tension between the members of the royal family, at least they can all agree on one thing: birthdays are always meant to be celebrated, even if there's a potential conflict brewing ahead.