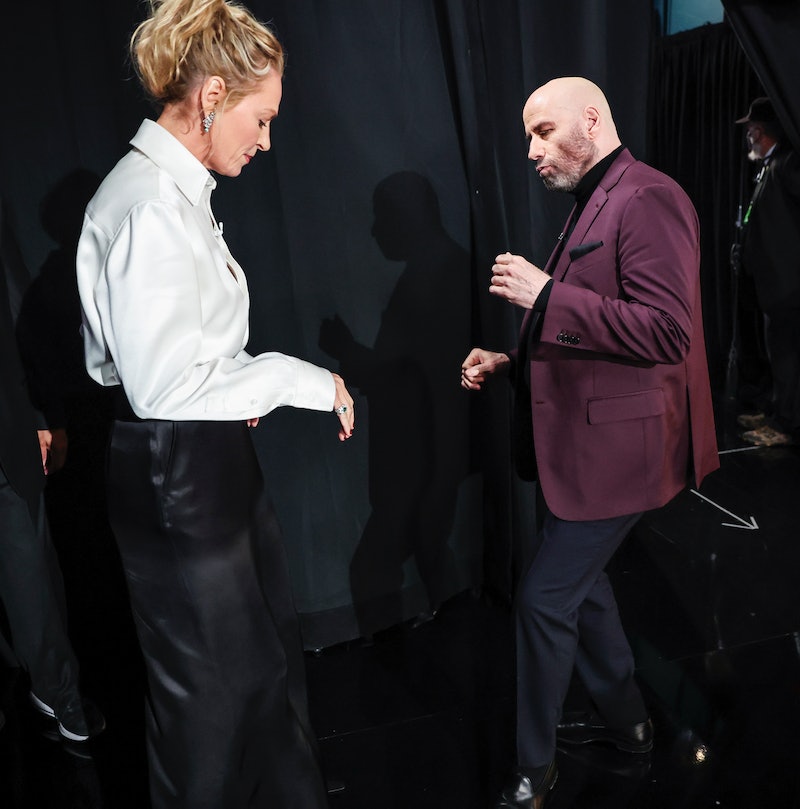 Samuel L. Jackson, John Travolta, and Uma Thurman staged the perfect Pulp Fiction reunion on stage at the Oscars, and fans have been left wanting more. Appearing in a white silk shirt and black skirt, a clever hint to the outfit worn by the iconic Mia Wallace, Thurman showed off her skills as she recreated the film’s iconic dance scene with Travolta. Meanwhile, Samuel L. Jackson had a replica of the famous Pulp Fiction briefcase with him. The former cast mates shared a few laughs ahead of announcing Will Smith as the Best Actor winner for his title role in King Richard. And yes, the trio had to go on stage after that Oscars outburst.

Responding to a video of the very special reunion, held 28 years after the film’s initial release, one YouTube commenter wrote: “Goosebumps and wet eyes. This so amazing.” In a Twitter post, one Pulp Fiction fan mused: “Travolta may have lost the hair, but he's still got the moves. Very slick reviving dance scene with Uma Thurman.” Another excited fan wrote: “Uma Thurman and John Travolta recreating their Pulp Fiction dance needs to be talked about more because that had me screaming, crying, smiling, and shaking.” No doubt referencing Will Smith’s outburst at Chris Rock, one social media user remarked: “John Travolta saved the Oscars with the Pulp Fiction dance.”

“I don't normally give in to nostalgia, but this Pulp Fiction reunion, complete with Uma Thurman and John Travolta doing the dance, put a smile on my face,” one happy fan admitted.

With a star-studded cast, Quentin Tarantino’s Pulp Fiction is a beloved cult classic. Tarantino went on to create the likes of Kill Bill: Vols 1 & 2, Jackie Brown, Django Unchained, and Once Upon A Time In Hollywood.

Thurman, who played the role of Mia Wallace in Pulp Fiction and The Bride in Kill Bill, recently passed the torch to her daughter, Maya Hawke. The rising starlet made a brief appearance in Once Upon A Time In Hollywood as a Manson Family member.

More like this
S Club 7’s Jon Lee Continues To Reach For The Stars
By Rachel Mantock
Fans Think Beyoncé’s “Break My Soul” Is Calling For A New Great Resignation
By Sam Ramsden
12 Crucial Casa Amor Predictions About Who Will – & Won’t – Stay Loyal, Babe
By Victoria Sanusi
Vanessa Hudgens Proves She's Always A Wildcat At This 'High School Musical' Location
By Alyssa Lapid
Get The Very Best Of Bustle/UK