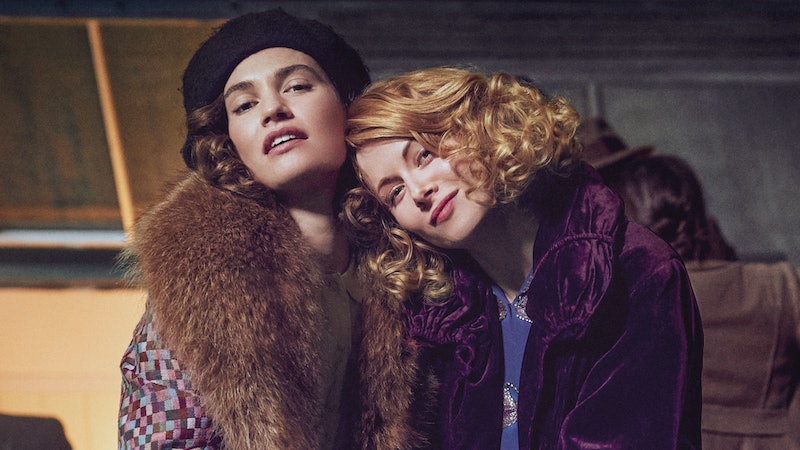 Spoilers ahead for BBC’s Pursuit of Love. For a story set during the interwar period, you’d expect the Pursuit for Love soundtrack to be filled with songs related to the time. However, this BBC drama has gone in quite the opposite direction, and instead has opted to use quite a few modern tracks to frame its narrative. For only three episodes, the series packs quite the soundtrack with the likes of Sleater-Kinney and Le Tigre as well as classic songs from The Who and New order. So if you’ve been struggling to figure out the tunes heard throughout the drama, here are the main songs featured in each episode of BBC's Pursuit of Love.

Pursuit of Love opens with strong positive vibes courtesy of The Who’s “Blue Red and Grey.” An uncharacteristically light song from the band, it frames the introduction of Linda (played by Lily James) as she sunbathes naked on her roof terrace before being rudely disturbed by a bomb crashing through her home during The Blitz.

The lyrics paint a lovely picture of Linda admiring “every minute of the day” as long as her true love is around. While the audience hasn’t met the love of Linda’s life yet, she’s truly content in this moment before her life is turned upside down.

Sleater-Kinney’s “Modern Girl” bookends the episode as Linda realises marrying Tony Kroesig (Freddie Fox) is totally the wrong idea. While the song opens on a positive note, the lyrics gradually note a sense of realisation that something isn’t right. “My whole life / Was like a picture of a sunny day,” the track concludes.

The second episode opens with a pretty upbeat number by The Meters, a group described as “funk pioneers” with their track “Cissy Strut.” If you’ve managed to see the Acadmey-Award winning Another Round, you’ll totally recognise this song.

Playing over a montage of Linda and Tony’s marriage, the deterioration of their relationship is clear. “I must have overlooked something / Because I’m in over my head,” the Meters sing. “But the best damn things in life are free / And as long as I got your company / That’s what she said.”

John Cale’s “Paris 1919” concludes episode two, where the Welsh musician sings of a woman making him “so unsure” of himself by “standing there but never ever talking sense.” It plays over Linda talking to Fabrice de Sauveterre (Assaad Bouab) for the first time, who later becomes the love of her life.

American jazz musician Blossom Dearie opens the final episode with her romantically upbeat “Plus Je T’embrasse,” which is basically Linda and Fabrice’s love song. “The more I kiss you / The more I like kissing you,” Dearie sings. “My heart beats when you leave / But everything is alright when you come back.”

The series ends on a solemn note with Cat Power’s “Sea of Love” following the tragic deaths of both Linda and Fabrice, but leaves a sense of optimism through Linda’s cousin Fanny (Emily Beecham) talking about the life that Linda lived.

A cover of Phil Phillips song of the same name, Power’s vocals strengthen Fanny’s feelings, lingering on the love Linda gave and the strength of their relationship. The track was also featured heavily in Juno, in an equally emotional scene.

The BBC has put together a dedicated radio mix via their Sounds app, too.

Check out a list of all the songs we could identify from the soundtrack below: