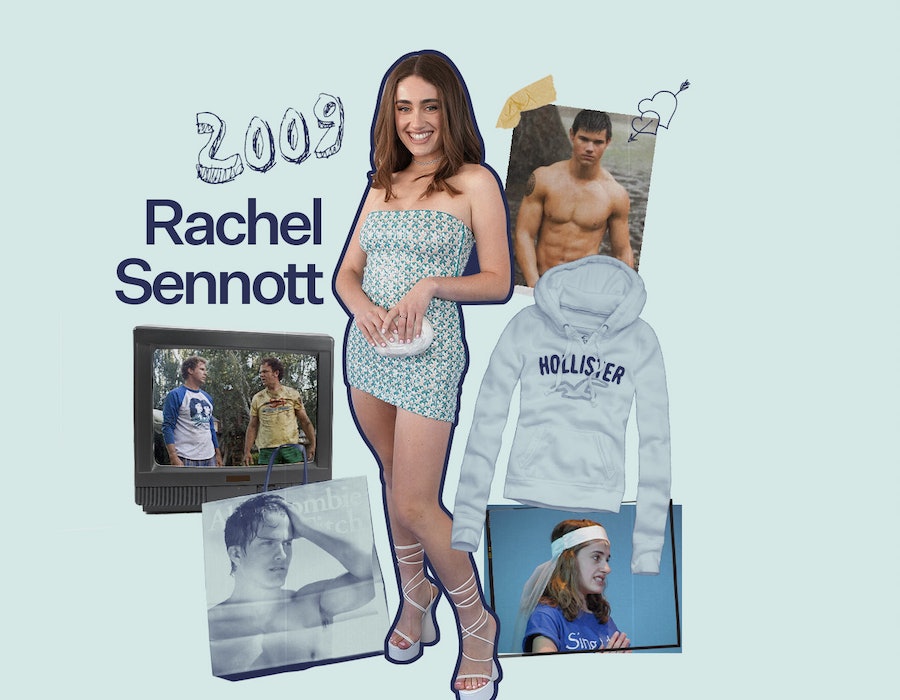 But even though she felt things — like an unequivocal devotion to Team Jacob — Sennott hadn’t yet fully gone through puberty, and was endlessly mocked for her petite, underdeveloped physique. Luckily, she had a superpower: the rollicking sense of humor that would one day make her the breakout star of 2021’s Shiva Baby, as well as a standout among the murderer’s row of talent in this summer’s Bodies Bodies Bodies. “People would tease me and make fun of me. Then I started being like, ‘Guys, stop, please stop.’ And [some] people would laugh,” she says. “I realized if I played on the joke, everyone would laugh. It felt like I was more in control.”

In the years since, Sennott has worked hard to move past feeling like she’s the butt of the joke — to root her humor in self-confidence, not self-deprecation. “Social media helped me feel more confident because I remember feeling not pretty or whatever. Then I literally was like, ‘I'm going to tell myself every single day that I'm cool or that I'm smart in my own way,’” she says of her Instagram account, @treaclychild, where bio reads, “sexy, and unique.” “Being funny online, like posting photos that I think felt true to me, even if they were kind of weird or different, that kind of helped me form a sense of identity.” A self-consciously sexy identity at that — thank Jacob Black.

Below, Sennott reminisces about getting felt up watching Step Brothers, her love of Hollister, and the Gossip Girl-esque beauty standards of the late aughts.

I was a musical theater nerd. I was always into performing, but not in a cool way. I feel like I was probably annoying to be around, very goody two shoes.

You were raised Catholic. What was your relationship like to religion at the time?

I was really scared — terrified, honestly — of going to hell. I went to church every single Sunday. I was not very sexually experienced at 14. I didn't kiss for a really long time and then that was all I did. Then one time during Step Brothers, my high school boyfriend touched my boobs over my shirt. I literally was scandalized.

How were you feeling in your body?

Horrible. I didn't feel confident in myself until like two, maybe three years ago. I went through puberty later. I remember getting boobs when I was doing a production of Les Mis and I was Madame Thenardier. I had to wear this corset and they put it on me and I looked down and I was like, "Oh my God, I have tits." It was crazy. I remember people would look at my boobs in the corset and I was like, "This means something." Then I wanted people to keep looking at my boobs. I think that was my first foray into growing up. I was like, "Boobs. I feel good about those."

Then in college I went on birth control, which made me insane and f*cked up. I was breaking out, my face shape changed. It made my face all puffy, just from the weird hormones. So I didn't feel very confident in college, and right after college either. Then I went through a relationship that destroyed my life, but made me hot because at the end I was like, "I must find self-worth." So now I I feel more confident in just myself. I can tell what my style is and what kind of things make me feel good. But it took a while.

So you hadn’t gone through puberty yet at 14?

Yeah, I had a slow puberty. My period came late. I was really short. In middle school, I remember my friend group called me “the butt” of the group, which was mean. Like I was the bottom of the group, the butt of the joke. It sucked. I remember I brought a reusable lunch bag to school that my mom had got me from Walmart, and everyone else had brown paper bags. One day my friends sat me down at the table and they were like, "You need to bring a brown paper bag tomorrow or a Vera Bradley lunch bag, or you can't sit with us."

What did you do?

I literally had a breakdown to my mom and then I brought a brown paper bag. She was like, "It's horrible for the environment." I was like, "I don't care! I'm being bullied!"

I would beg my parents to take me to Hollister or Abercrombie. Then I got one or two shirts from there, so then I would just wear the same Hollister or Abercrombie shirt over and over and over. I remember my friend gave me her Abercrombie hand-me-downs, because I was so much shorter than her and smaller than everyone else. So I wore this pink and green Abercrombie polo — I would alternate between the two shirts — and I didn't have time to wash them. Then I raised my hand in class and I smelled my own armpit and I was like, "Okay, I need to wear another shirt for a day."

How did you imagine your future when you were 14?

I always wanted to be an actress, so I was thinking of that. But I didn't have a very good idea of what being an actress-writer-performer meant. In my head I was like, "You get into a limo...”

I'm glad that this has changed because at the time Gossip Girl [actors were the norm]. I always wondered how I would ever fit into those beauty standards or just that world. Because I can't really pull that off. So I think at 14 [I din’t realize] I could authentically look like myself, feel like myself, and feel like that's what makes me interesting, as a performer.

More like this
Paul Mescal, Man Of Mystery
By Samantha Leach and Heather Hazzan
What Joyce Carol Oates Knows About Fame
By Erin Somers
'Grey's Anatomy's New Intern Got Advice From Dr. Bailey Herself
By Grace Wehniainen
Deuxmoi’s Definitive Guide To Celebrity Liquor Brands
By Deuxmoi
Get Even More From Bustle — Sign Up For The Newsletter