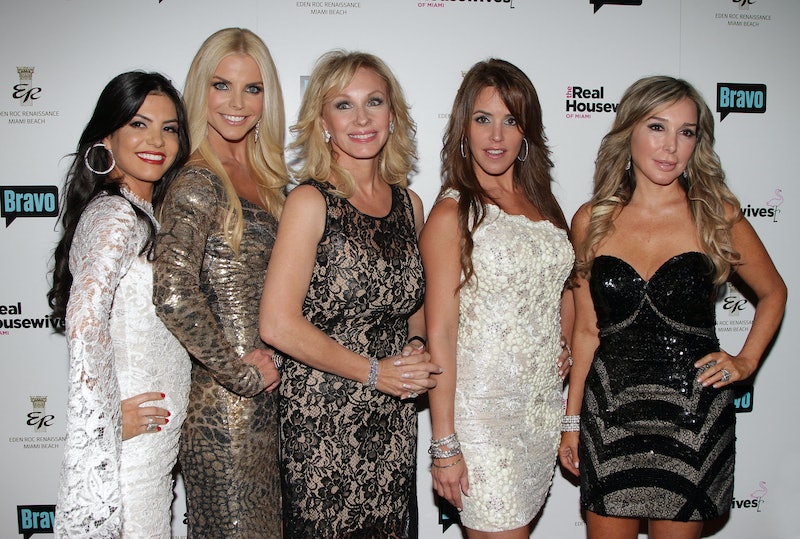 Three things are guaranteed in life: death, taxes, and Real Housewives shows lasting forever — even after already being declared dead. On Wednesday, Feb. 17, Peacock announced that a Real Housewives of Miami revival was in development, confirming reports that the show would return on the NBCUniversal streaming service. Andy Cohen will executive produce the revival, which will be the first Housewives series to not air on Bravo, the franchise's usual home.

RHOM first aired on Bravo in 2011 and lasted three seasons before its eventual end in 2013. Fans have stayed fiercely loyal and advocated for the show's return ever since, and in November 2020, Cohen teased that he was working on making it happen. "I have really been trying to get Peacock to pick up Miami," he said on Danny Pellegrino's Everything Iconic podcast. "I don’t know if I’m allowed to say this. I don’t know where we are with that."

It turns out his efforts paid off. While Peacock didn't confirm any casting details, Entertainment Tonight reported on Feb. 1 that producers were in the "full swing of interviewing," while Us Weekly said they were "very close to narrowing down" a full cast. "They want to have a very diverse cast and are speaking to women from all different backgrounds," a source told Us. Now that the revival is official, fans have taken to Twitter to express their pure joy, along with their hopes for the series.

The first season starred Lea Black, Adriana de Moura, Alexia Echevarria, Marysol Patton, Larsa Pippen, and Cristy Rice. After the departures of Pippen and Rice, four new Housewives joined for its second season, including Lisa Hochstein and Joanna Krupa. The news of the revival has inspired fans to manifest the returns of their favorite Housewives.

While no casting has been confirmed, Us Weekly reported that Hochstein, Patton, and de Moura have expressed interest in coming back. However, no one seems to be more in demand than Pippen, who has recently made headlines after falling out with former best friend Kim Kardashian. In fact, according to Entertainment Tonight, Pippen has already received an offer to return and is reportedly considering it, which is music to fans' ears.

Peacock has not revealed when RHOM is expected to begin production or premiere on the streaming service, but fans will be waiting with high hopes.

More like this
Rachel Fuda Gave Birth Just Weeks Before 'RHONJ' Season 13
By Brad Witter
'RHOSLC’s Heather & Whitney Are Still On A “Friendship Break” After Season 3 Reunion
By Jake Viswanath
RHOP’s Robyn Dixon Explained Why Juan Paid For Another Woman's Hotel Room
By Brad Witter
Everything To Know About 'The Real Housewives Ultimate Girls Trip' Season 4
By Jake Viswanath
Get Even More From Bustle — Sign Up For The Newsletter
From hair trends to relationship advice, our daily newsletter has everything you need to sound like a person who’s on TikTok, even if you aren’t.