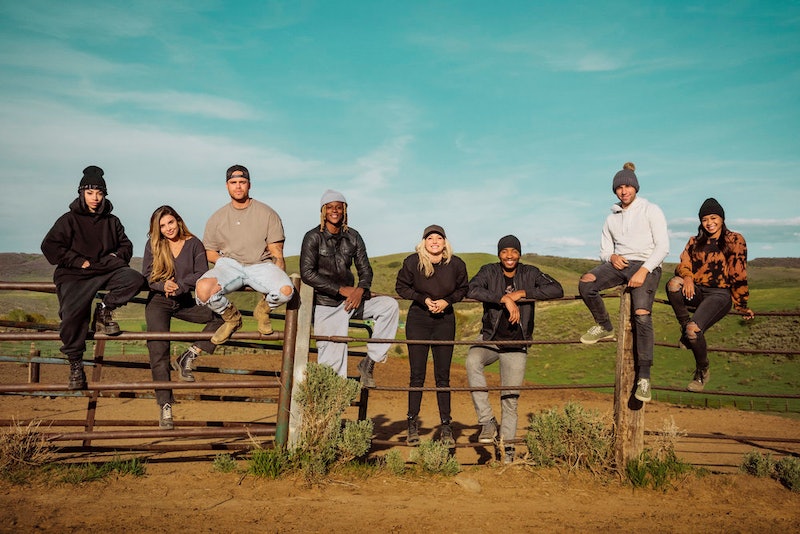 Plenty of celebrities have gotten reality shows just for being famous, but E! is taking it a step further with Relatively Famous: Ranch Rules. The new series follows eight celebrity children as they spend four weeks living and working together as ranch hands in Steamboat Springs, Colorado. Their aim? Proving to themselves, their parents, and the public that they’re worth more than their famous last names.

In each episode, the kids take on dirty and challenging jobs as they help to reopen Saddleback Ranch after a year of loss and shutdown amid the coronavirus pandemic. For many of them, the experience was much harder than they assumed it would be going in. “I originally thought I was gonna be on the show to help with like Instagram," Hana Giraldo, the daughter of ‘80s rock legend Pat Benatar and musician Neil Giraldo joked during an interview on E! News' Daily Pop podcast. "Not like picking up Kaka and shoot, sticking my hand up a cows you know who. This show really taught us a lot. It was a lot. It was a lot of work.”

Ebie, the daughter of rap legend Eazy-E, teased in the same interview that a lot of drama unfolded in between their work, too. “It was a rollercoaster,” she said. "There were fist fights, love, tears, friendship, family bonds created. So much happened."

As you watch their journey unfold, get to know the cast below.

Like her mother, Hana is a musician who’s released songs with a similar pop rock persuasion. However, the 27-year-old has also ventured into acting and fashion design. “I’ve always had an eye and love for fashion! Even as a kid I would constantly draw shoes or purses,” Hana explained in an interview with About Insider in 2020. “One day I was looking online and saw some shirt worth hundreds of dollars and I thought, ‘Wait, I can do that.’”

As far as acting, Hana has appeared several shorts and films including the 2019 horror movie Slasher Party. She’s also active on Instagram, where she shows off her glamorous life with pictures of her lounging on the beaches of Malibu, posing with supercars in Beverly Hills, and modeling chic glasses she designed herself.

Taylor Hasselhoff is the daughter of Baywatch star David Hasselhoff. However, she opted not to continue in her farther’s footsteps and instead build a career in real estate. The 31-year-old has listings throughout California under her website Realtay, which is connected to the Aaron Kirman group. According to the site, Hasselhoff is not only one of the top luxury agents in Los Angeles but also nationally. Her life outside of work is just as luxurious: Her Instagram includes photos of her on the white steps of Santorini, frolicking in the waters of the Italian coast, and posing in Calabasas mansions.

Myles, the son of NBA legend Shaquille O’Neal and reality TV producer Shaunie O'Neal, followed suit with many of his co-stars and pursued a career outside of his father’s legacy. As a model, the 24-year-old has worked with the likes of Dolce & Gabbana, Givenchy, and Michael Kors. “I had no plans on ever being in the fashion world or anything like that," Myles told Paper magazine in December 2020. "I'd post fit pics on Instagram but that was just for fun.” However, after seeing how his peers embraced fashion as a lifestyle, he realized he could monetize his passion and began working in the industry. “It really just helped me step into like a more creative mindset and space,” he told Paper.

Myles’ style is on full display across his Instagram, where he showcases his fly suits, trendy pajamas, and street casual clothes.

Jasmin Lawrence, 26, is the daughter of comedy legend Martin Lawrence, one of the most successful comics from the late ‘90s and 2000s. Lawrence is best known for his acting work in the Bad Boys franchise, and those who watched the most recent film in the series, Bad Boys For Life, may have noticed a cameo from Jasmin in the role of a door woman.

According to her Instagram, Jasmin is a Duke University alum currently living in LA. She’s dating Eric Murphy, the son of comedy icon Eddie Murphy. She confirmed their relationship on Instagram in a 2021 birthday tribute.

Described as a “serial entrepreneur,” Redmond Parker is the son of the Grammy-winning singer-songwriter Ray Parker Jr., who’s best known best for writing and performing Ghostbusters’ famed 1984 theme song. Like his father, Redmond works in the entertainment space and has been acting for the last seven years, appearing in shows like Transparent, Beauty and the Baller, and Jax + James. The actor’s Instagram shows off his active lifestyle in California, as well as adventures in Spain and the French riviera.

Ebie Wright is the daughter of late rap legend and former N.W.A. member Eazy-E. The 30-year-old is a musician herself, but has also ventured into documentary work: In 2021, she released a WEtv docuseries investigating her father’s death titled The Mysterious Death of Eazy-E, which delves into some of the unexplained circumstances surrounding his 1995 death.

“This is NOT ‘A Ruthless Scandal.’ However, this Limited Series is a great introduction to our story that took many years for people to ‘FULLY’ understand,” Ebie wrote of the show on Instagram. “This series is exploring the specific viral conspiracy theories that have been rumored for years overshadowing THE TRUTH!”

Austin Gunn, 27, is the son of wrestler Billy Gunn, who performed in the WWE from 1993 to 2004. Austin, too, is a professional wrestler. Though not yet on the WWE roster, he currently competes in the ring for All Elite Wrestling — often alongside his brother and tag-team partner, Colton Gunn. Austin’s Instagram is largely focused on his wrestling career, including photos of himself and his brother screaming for fans, actively wrestling in the ring, and taking some downtime behind the scenes.

Harry James Thornton is the son of acclaimed actor Billy Bob Thornton (Sling Blade, Fargo, Friday Night Lights). He appears to be the least public person in the cast, though he is active on Instagram. He lives in in Los Angeles and appears to enjoy skateboarding and spending time with his daughter.