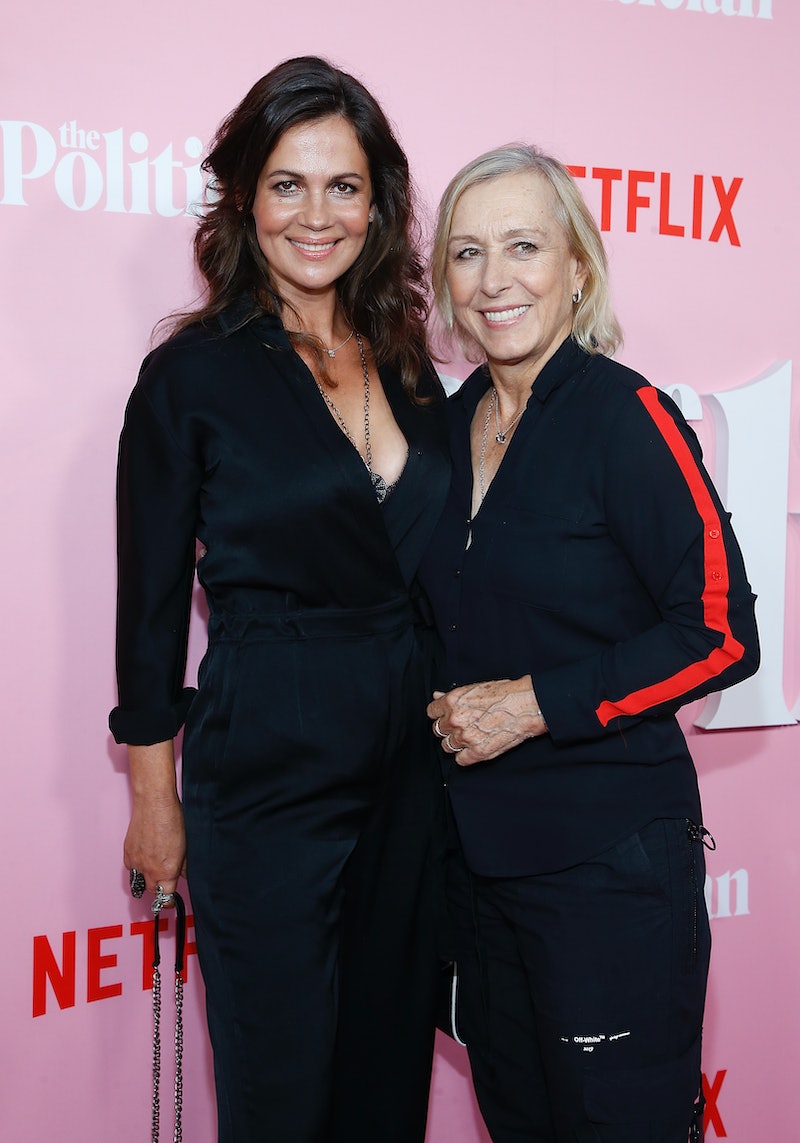 After eight years off air, the Real Housewives of Miami is back, and there’s a new Housewife breaking boundaries for the franchise. RHOM star Julia Lemigova makes her debut in Season 4 as the first queer woman to star in the series. “Living in Miami, you can be you and people accept it,” Julia says in the RHOM trailer. Joining her on the show is her wife, famous professional tennis player Martina Navratilova, a 59-time Grand Slam winner who was born in Czechoslovakia but defected to the United States in 1975.

“I cannot wait to show the world that a same-sex marriage is just like any other marriage. We will share our joy, fun, and our daily life,” she told E! News. “I really want to express this to people who don't understand that love has no gender, and I’m forever grateful for The Real Housewives of Miami for giving me this opportunity to shine the light on our life.”

Here’s everything to know about the new cast member.

Julia Is A Former Pageant Queen

According to her official Bravo bio, Julia Lemigova is a former Russian beauty queen who was the first runner-up at Miss USSR in 1990 — but she was later crowned Miss USSR after the original winner was disqualified. As Miss USSR, Julia went on to represent the Soviet Union at the Miss Universe 1991 pageant, where she came in third place.

She Once Owned A Spa

After being crowned Miss USSR, Julia moved to Paris and opened up a spa called Joiya Spa in 2003; in 2009, she also launched a skin care and spa line called Russie Blanche.

Today, Julia focuses on raising her family, as well as running a little farm where she cares for a variety of animals. “We have lots of chickens; ducks; geese; quail; doves; cats; parrots; tortoises; and two, maybe three, pregnant goats; a couple of donkeys on the way; and God knows what else,” Julia told E! News. “I also grow fruits and vegetables there.”

Naturally, being a pageant winner also helped Julia become a successful model. She was an international model from 1991 until 2005, when she had her first child, according to her Bravo bio. You can find examples of her old photoshoots on her Instagram, and well as pictures of Julia with her two daughters, Emma and Victoria.

As Julia explained to E! News, she first met her wife in the early aughts. “We met for the really, really first time in 2000. But then our lives kind of drifted apart, and we didn’t see each other for eight years until Paris,” Julia said. They bumped into each other again exactly eight years later during a tennis tournament.

Julia and Martina are 15 years apart in age, and Martina was in her 50s when they first got together, per The Daily Mail. In an interview with Radio 4, Martina explained that “the ship has sailed” on having her own children, but she instantly took to being a parent to Julia’s kids. “It’s difficult, two girls, but it’s fun, it’s amazing,” she said. “It’s instantaneous family. It’s strange because you get into a relationship and there are two kids. Yeah, it changes your life, there’s no doubt about that, but in a good way.”

Per People, Martina proposed to Julia at the U.S. Open tennis championships in 2014. She popped the question during a break while she was providing color commentary for the men’s matches. She turned to Julia and then got down on one knee to offer a ring. Julia said yes, and the whole moment was captured on camera.

As Julia explained to E! News, original RHOM cast member Adriana de Moura introduced Julia to the group. “I’m so glad she did,” Julia said. “I couldn’t believe it at first that I'm actually going to be doing something like that and when it became real it was just this overwhelming, exciting, happy feeling to emerge myself in a completely new adventure and universe.”

And while Martina may stay out of the spotlight for the show, Julia told E! News that her wife has been endlessly supportive of her decision to be on RHOM. “She’s very sweet. She's very supportive of me, and that’s what makes us a really strong couple,” Julia said. “We have a lot of sense of humor and even something unusual like me wanting to be on the show — normally I’m a more private person — she just thought it would make me happy and said, ‘Go for it, girl.’”