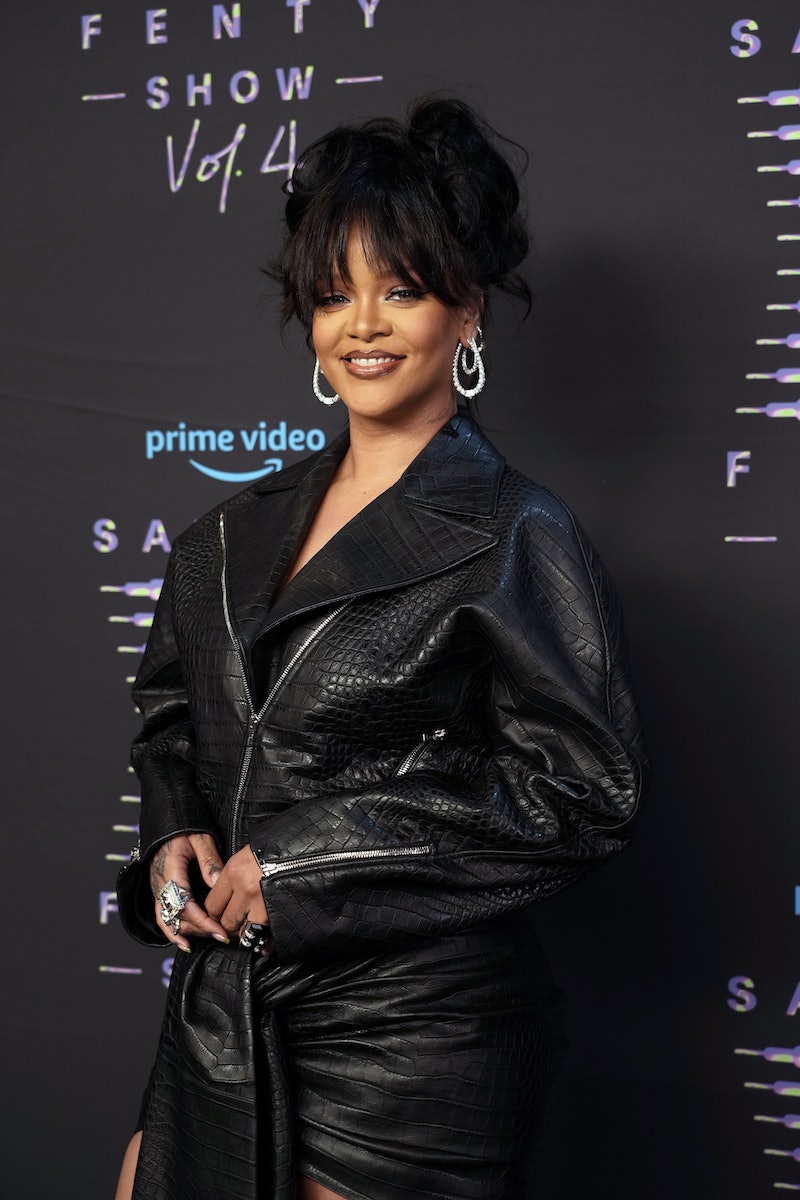 There’s only one person Rihanna fans would have wanted to see more than the singer herself in her first TikTok: her 7-month-old son. And that’s what she gave the people when she posted her first video on the social media platform on Saturday, Dec. 17. The adorable TikTok featured her and A$AP Rocky’s little man, in all his chubby, gummy glory. It might have even revealed what she calls her baby, though the couple has yet to publicly share his name.

In the video, the two are in the backseat of a car together as the baby shows that entertaining is in his DNA. When the clip starts, he turns toward his mom and the camera, and breaks into a toothless grin, which sends Rihanna into quiet giggles. Then, still smiling, he pulls his chin into his neck and wiggles his eyebrows, earning an “Ooh!” from the Fenty Beauty founder.

The baby also gets a chance to shoot his own scene when Rihanna gives him her phone. Interestingly, she seems to call him “Dragon,” but it’s hard to tell for sure. So, heads-up: That could be his name or a nickname — or it might still be something totally different. (Bustle has reached out to Rihanna’s rep for comment but did not receive an immediate response.)

Adorable though the little kiddo may be, his camera skills could use some work. Rihanna hands him her phone twice, and like all babies, he just wants to put it straight in his mouth. But that’s what makes the video so charming. The rare behind-the-scenes look at Rihanna and her son’s life together shows they’re basically like any other adoring mom and her so-cute-you-just-have-to-squeeze-their-cheeks baby.

“ITS [sic] THE BABY,” one enthused fan commented on the unexpected TikTok. Another seemed equally shocked to see him, writing, “OMG THIS DOESNT [sic] FEEL RIGHT.” Yet another wrote, “Am I dreaming rn” and added a flushed-face emoji to show their surprise. Even Rihanna joked in her caption, “hacked.”

Fans were surprised, yes, but they were ecstatic, too. “Our nephews so precious y’all,” one wrote. A number of others described him as “precious,” “so cute,” and “adorable.” People also tried to figure out who he looked like and saw both Rihanna and A$AP Rocky in him. At least one person also pointed out a resemblance to Rih’s brother, Rajad Fenty.

The video is fans’ closest look at the baby since he was born in May. Rihanna has been clear about how difficult it is for her and A$AP Rocky to do “the things that we want to do as parents with him,” as she put it during an Associated Press clip from her Savage x Fenty show red carpet on Nov. 7. “The challenge is we want to do regular sh*t with our baby,” she explained, listing going to parks and on walks as examples. “Since we haven’t got around to sharing him with the world, we have to navigate it extremely, extremely cautiously right now.”

It looks like they’re ready to share a little more now, so maybe his official name reveal will be next.

More like this
Lizzo Scares Herself Meeting Her Madame Tussauds Wax Figures In A TikTok Video
By Alyssa Lapid
All The Best Celebrity Reactions At The 2023 Grammys
By Brad Witter
The Beyhive Is Mad At Harry Styles After Beyoncé’s Album Of The Year Snub
By Jake Viswanath
9 Photos Of Celebrity Couples & Unexpected Duos At The 2023 Grammys
By Jake Viswanath
Get Even More From Bustle — Sign Up For The Newsletter
From hair trends to relationship advice, our daily newsletter has everything you need to sound like a person who’s on TikTok, even if you aren’t.