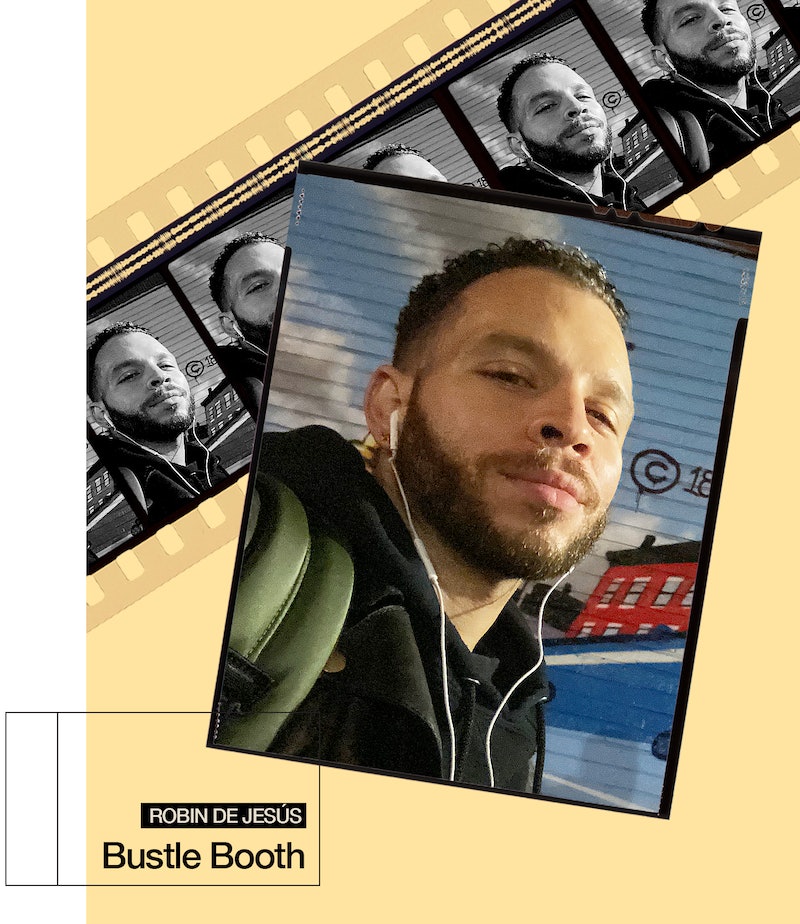 In Robin de Jesús’ favorite Tick, Tick… Boom! memory, he was car-bound. The Broadway actor was sitting alone in a private vehicle alongside a row of similarly isolated castmates — actors like Vanessa Hudgens and Alexandra Shipp — as they each bided time waiting for COVID-19 tests. “Vanessa was in the car next to me, twerking in the window just to make us laugh,” says de Jesús. “And Alexandra was running around screaming, just being silly.”

The troupe’s off-camera rapport — built over many months of filming and pandemic-mandated pauses — reverberates on screen in Tick, Tick… Boom! The Netflix film, helmed by Lin-Manuel Miranda, adapts Jonathan Larson’s same-named autobiographical musical to the screen, following the Rent creator (played by Andrew Garfield) and his confidantes as they attempt to make art in 1990 New York City. De Jesús plays Larson’s best friend, Michael, a gay former theater kid who, unlike the protagonist, has bought into the worthwhileness of a steady paycheck and traded stage markers for marketing research at a Manhattan advertisement company.

“For me, Michael is all about subtlety, tetheredness, cooing of Jon,” the Puerto Rican actor tells Bustle over the phone. “As someone who plays larger-than-life characters, I wanted to play someone more subtle. With Michael, there’s a lot of meat on the bone, but I could do a quieter performance.”

De Jesús made his Broadway debut at age 21 in Rent as an understudy for Angel. He’s well-known among theatergoers, most recently as as Emery in the 2019 revival of The Boys in the Band — a role he translated to Netflix alongside industry heavy-hitters like Jim Parsons, Zachary Quinto, Matt Bomer, and Andrew Rannells. It earned de Jesús his third Tony nomination.

His first Tony nod? For originating the role of Sonny in Miranda’s 2008 musical In the Heights.

Tick, Tick… Boom! reunites de Jesús with the Hamilton creator 12 years after they introduced cousins Usnavi and Sonny to the world. “That script was not a perfect script [at the time],” he says of his first In the Heights table-read. “But it was anointed. It was special. And I downloaded that character so fast.” For the uninitiated, the teenage Sonny mans the Manhattan bodega of his older cousin, Usnavi, a role that Miranda expanded in last summer’s film adaptation. “When they saw me as Sonny, they ended up rewriting the character in a way that was tailored to me,” says de Jesús, who made his acting debut in the much-loved 2003 indie film Camp. “It wasn’t until I got there that Sonny had conflict with Usnavi. … It changed vocally when I entered too. Sonny suddenly became more of a tenor.”

Learn more about the Broadway mainstay in the Bustle questionnaire, below.

Nitro cold brew with two shots of sugar-free vanilla or caramel. Judge me!

All of Maria Hinojosa’s work.

More like this
'That '90s Show' Star Callie Haverda Got Advice From Mila Kunis & Ashton Kutcher
By Brad Witter
At 28, Rosie Perez Risked Her Career To Stop Playing Stereotypes
By Gabrielle Bondi
At 28, Debra Jo Rupp Was Living A Much Different '70s Show
By Grace Wehniainen
'Bling Empire: New York’ Star Dorothy Wang Wants To Try 'The Simple Life'
By Alyssa Lapid
Get Even More From Bustle — Sign Up For The Newsletter
From hair trends to relationship advice, our daily newsletter has everything you need to sound like a person who’s on TikTok, even if you aren’t.