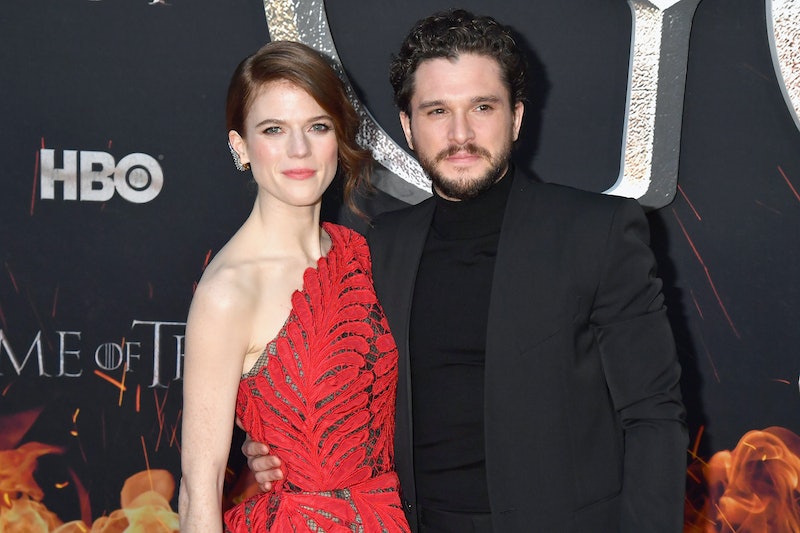 Kit Harington has bid farewell to his famous Game of Thrones curls, but it turns out his new buzzcut wasn't exactly voluntary. In a new interview with Page Six, his wife — actress Rose Leslie — revealed she accidentally ruined Kit Harington's hair during quarantine when she got distracted while giving him an at-home trim.

Leslie — who is expecting her first child with Harington — was chatting about how the pair passed the time at home when she revealed what happened after he handed her a pair of clippers. “I was on FaceTime to a friend at the time,” she explained. "He was like, 'Can you do the back, because I can't see it with the mirror?' And I was so engrossed with my girlfriend, we were having such a lovely time, and I was like, 'Yeah yeah yeah, fine, whatever.'"

Because she was holding the phone with her dominant right hand, Leslie proceeded to trim Harington's locks with the other. "I took the shears in my left hand, and … I dug too deep. I dug too deep!" she recalled. "It was rather hilarious, but also awful. Fortunately, he looks great with a semi-shaved head, so it was fine."

As "awful" as that moment may have been for Leslie, her husband has long been open about his complicated relationship with his hair, which he was required to grow long for his role on Game of Thrones. "I'd like to step away and enjoy the obscurity, cut my hair, make myself less recognizable as the character, and go do and some other things with a completely new look and tone," he told Entertainment Weekly in June 2019 about his desire to shed Jon Snow's signature style.

The pair also have something more important to focus on than Harington's hairstyle; namely, setting up their new East Anglia home ahead of the arrival of their first child. Leslie, who told Page Six that she is "thrilled to be pregnant," hasn't shared many details about her pregnancy, but she did tell Make magazine in September that she and Harington have been enjoying this time together in their new home. "It's incredibly old," Leslie said at the time, describing the Tudor-style house as "the home Jon Snow built."

The couple has, however, been more forthcoming about their love story, which began while filming Game of Thrones together in Iceland. "The country is beautiful, because the Northern Lights are magical, and ... it was there that I fell in love," Harington told Vogue in 2016 about the start of his romance with Leslie. "If you're already attracted to someone, and then they play your love interest in the show, it becomes very easy to fall in love…" Four years, a wedding and one awkward haircut later, they're now preparing for their next chapter: parenthood.

More like this
A New Portrait Shows King Charles With William & Kate Before The Queen’s Funeral
By Stephanie Topacio Long
There’s A Brand New 'Drag Race' Spin-Off In The Works
By Sam Ramsden
Holly Willoughby & Phillip Schofield #Queuegate Drama, Explained
By Sophie McEvoy
Alan Rickman's Diary Reveals Why He Considered Leaving 'Harry Potter'
By Darshita Goyal
Get Even More From Bustle — Sign Up For The Newsletter