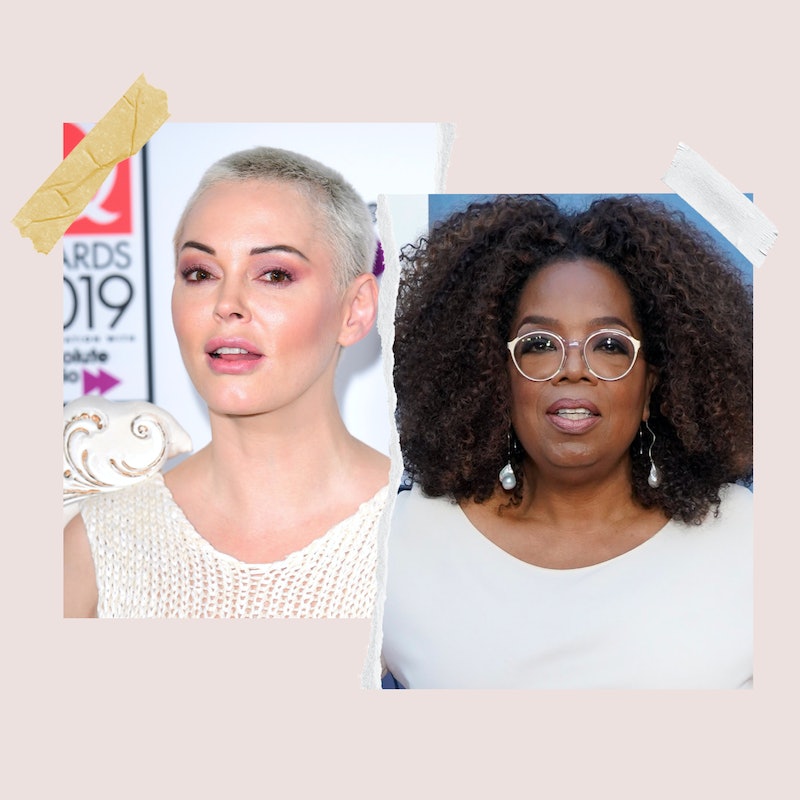 Rose McGowan thinks Oprah Winfrey’s support for the #MeToo Movement was totally fake. On Sunday, Aug. 29, the Charmed star slammed the talk show host on Twitter for her past friendship with disgraced film producer Harvey Weinstein. “I am glad more are seeing the ugly truth of @Oprah,” McGowan tweeted alongside a photo of Oprah kissing Weinstein on the cheek at the 2014 Critics’ Choice Movie Awards. “I wish she were real, but she isn’t.”

McGowan continued, “From being pals with Weinstein to abandoning and destroying Russell Simmons’ victims, she is about supporting a sick power structure for personal gain. She is as fake as they come. #lizard.” The 47-year-old actor was among the first dozens of women to accuse the producer of rape. In 2018, she told the Associated Press that Weinstein can “fall off the planet” after he claimed their relationship was “consensual.” “My statement is truth,” she said. “My statement is reality. Stop saying it’s consensual, you pig! You know it’s not true.”

Per USA Today, Weinstein has been accused of sexual assault by 87 women since the ‘70s. The accusations against him ranged from unwanted sexual advances to rape. McGowan is just one of many stars who’ve come forward about their experiences with the movie mogul. Kate Beckinsale recalled him offering her alcohol during their first meeting when she was 17. Cara Delevingne said he attempted to kiss her in a hotel room. Salma Hayek, Lena Headey, Angelina Jolie, Lupita Nyong’o, and Gwyneth Paltrow were just some of his other accusers. Weinstein has since been found guilty of rape in the third degree and criminal sexual act in the first degree.

Like Weinstein, Simmons has also had multiple accusers. According to Vulture, a total of 20 women accused the music executive of sexual assault and impropriety since 2017. In a story published by The New York Times, four of his accusers shared their personal accounts with Simmons, including three women who alleged that he raped them. “I vehemently deny all these allegations,” the Def Jam co-founder said. “These horrific accusations have shocked me to my core and all of my relations have been consensual.”

If you’re wondering why McGowan decided to call Winfrey out now, a video of the 67-year-old host interviewing Dolly Parton went viral over the weekend. In the interview, Winfrey prodded the country star about her plastic surgeries and said that she’s “had some work done, some tucks and pulls and sucks.” Ultimately, the clip sparked a larger discussion online about the TV producer’s relationships with Weinstein and Simmons, especially after Winfrey stepped down as executive producer of a documentary about the music mogul last year.

In January 2020, Winfrey announced that she would no longer be part of the project, which shared the stories of Simmons’ accusers. “There is more work to be done on the film to illuminate the full scope of what the victims endured, and it has become clear that the filmmakers and I are not aligned in that creative vision,” she said at the time. Regarding her relationship with Weinstein, the host said that she “didn’t know” about his behavior during a 2018 episode of Paltrow’s Goop podcast. “I was in Chicago, in my own little world,” she said, “but what I knew about Harvey was that Harvey was a bully and that if Harvey’s on the phone, you didn’t want to take the call because you’re going to get bullied in some way.”

Bustle has reached out to Winfrey’s reps for comment and will update this story if we hear back.