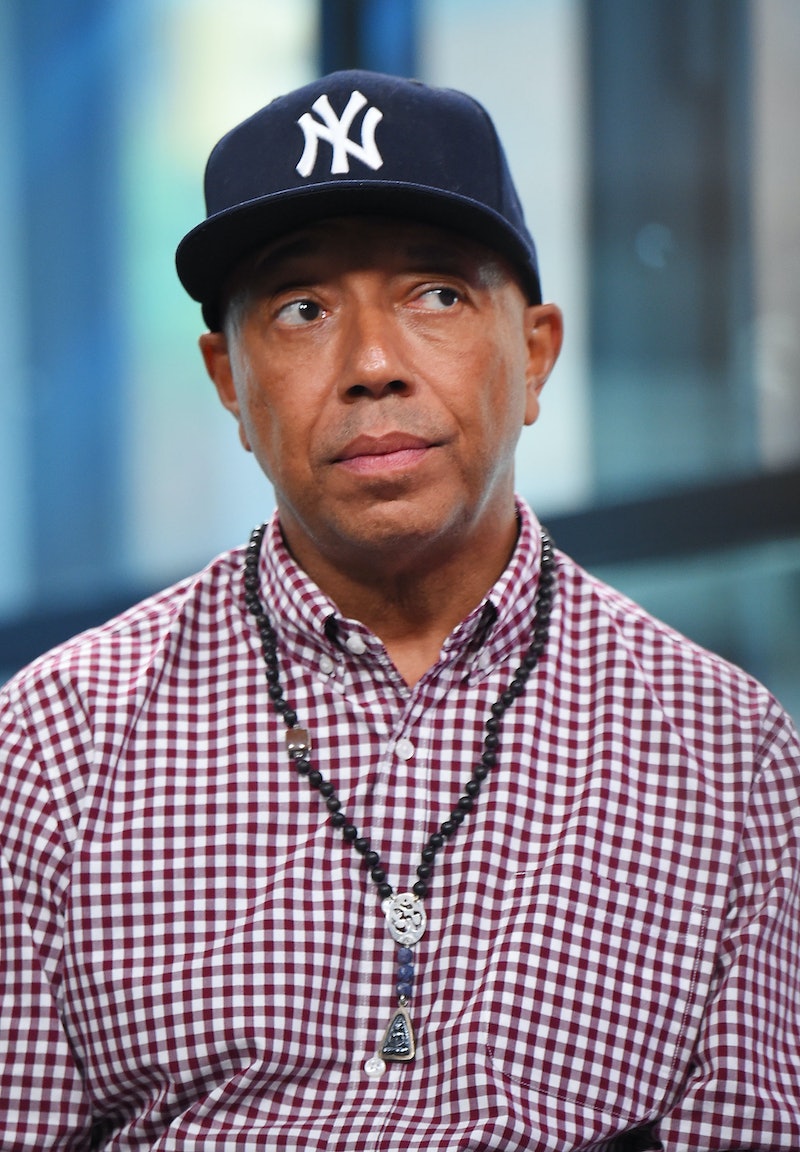 Following another accusation of sexual misconduct, Russell Simmons is stepping down from his companies. In a guest column for The Hollywood Reporter, screenwriter Jenny Lumet accused Simmons of sexual assault, detailing a 1991 incident in which she says he "sexually violated" her. Simmons, the founder of hip-hop music label Def Jam Recordings and CEO of Rush Communications, released a statement obtained by CNN, saying:

"While her memory of that evening is very different from mine, it is now clear to me that her feelings of fear and intimidation are real. While I have never been violent, I have been thoughtless and insensitive in some of my relationships over many decades and I sincerely and humbly apologize."

To end the statement, Simmons said he will "step aside and commit myself to continuing my personal growth, spiritual learning and above all to listening."

In The Hollywood Reporter piece, Lumet, who wrote the film Rachel Getting Married, alleges that Simmons raped her. Written as a letter to Simmons, Lumet — who is the daughter of director Sidney Lumet and the granddaughter of Lena Horne — explained that she had first met him in 1987 through legendary producer Rick Rubin and he had “always been kind to me.” She would continue to see him over the next few years, saying she never spent any alone time with him, but they had “many, many mutual friends” so they would see each other in group settings at clubs and parties.

In 1991, she alleged she got a ride home with Simmons, who had a car, from a restaurant. “I don’t recall having accepted a ride home alone with you before that night,” she wrote. Lumet then alleges that Simmons refused to have his driver drop her off at her home. “I couldn’t open the doors. I couldn’t open the windows. The car was moving,” she wrote. “The driver did not stop. He did not take me to 19th Street. He took me to your apartment.”

When she arrived at his residence she says she “didn’t recognize” Simmons as the person she had come to know and also “didn’t know if the situation would turn violent. I remember thinking that I must be crazy; I remember hoping that the Russell I knew would return any moment.” She says she followed Simmons into the apartment through what she assumed was a back entrance since there was “no well-lit lobby or doorman at the entrance we used.”

Lumet then claims Simmons took her into an elevator alone, leaving his driver behind, and “pressed me into the corner with your body, your hands and your mouth.” The two then got out at Simmons’ apartment where Lumet alleges he brought her into his bedroom and sexually assaulted her.

"There was penetration. At one point you were only semi-erect and appeared frustrated. Angry? I remember being afraid that you would deem that my fault and become violent. I did not know if you were angry, but I was afraid that you were."

After the incident, Lumet says she left Simmons’ apartment. “I never told anyone this story until October 27th of this year,” she wrote, noting it was after the Harvey Weinstein sexual misconduct allegations had gone public “but weeks before the first public claims were made against you.” (Weinstein's rep previously denied all allegations of nonconsensual sex in a statement to the New York Times: "Any allegations of non-consensual sex are unequivocally denied by Mr. Weinstein.")

On November 19, model Keri Claussen Khalighi accused Simmons of sexual harassment in a Los Angeles Times story. She claimed in 1991 Simmons and his friend, director Brett Ratner, took her to dinner and then back to Simmons’ apartment where he “began making aggressive sexual advances, yanking off her clothes.” She told the paper, “I looked over at Brett and said ‘help me’ and I'll never forget the look on his face. In that moment, the realization fell on me that they were in it together.” (In a statement to The Los Angeles Times, Ratner's lawyer, Martin Singer, wrote that his client had “no recollection” of Khalighi asking him for help that night.)

Ratner has also been accused of sexual misconduct by at least 10 women, including actors Olivia Munn and Natasha Henstridge. Ratner, through his attorney, has denied the allegations. In a statement to the Los Angeles Times, which first reported the story, Singer wrote, “I have represented Mr. Ratner for two decades, and no woman has ever made a claim against him for sexual misconduct or sexual harassment.”

Khalighi, who was half Simmons’ age at the time of the assault, said he did not have intercourse with her, but “coerced her to have oral sex.” Later that night, though, she says that after taking a shower, Simmons “briefly penetrated her without her consent.”

Simmons initially denied Khalighi’s claims, telling the Los Angeles Times, “Everything that occurred between Keri and me occurred with her full consent and participation.” Later, Simmons further denied Khalighi’s allegations in a letter to The Hollywood Reporter using some of the same language he used in his latest statement. “I have never committed any acts of aggression or violence in my life,” he wrote on November 22. “I would never knowingly cause fear or harm to anyone.”

It was Simmons’ letter, which encouraged Lumet to come forward with her own story of sexual assault against him, despite it being a difficult decision for her. She notes that revealing this story will likely make it harder for her to get work and will force many to delve deeper into her life looking for “every mistake, act of thoughtlessness, hypocrisy or cruelty I’ve committed in my 50 years.” She also wrote, “As a woman of color, I cannot express how wrenching it is to write this about a successful man of color.”

But, even still it was important for Lumet, a mother, to speak out against Simmons, who is the father to two daughters. “In this very moment,” she wrote to end her letter, “I feel a pang to protect your daughters. I don’t think you are inclined to protect mine.”

Simmons has not said who will take over for him at his companies, but in his statement, said this was a “time of great transition. The voices of the voiceless, those who have been hurt or shamed, deserve and need to be heard.” Lumet’s voice is now one of them.