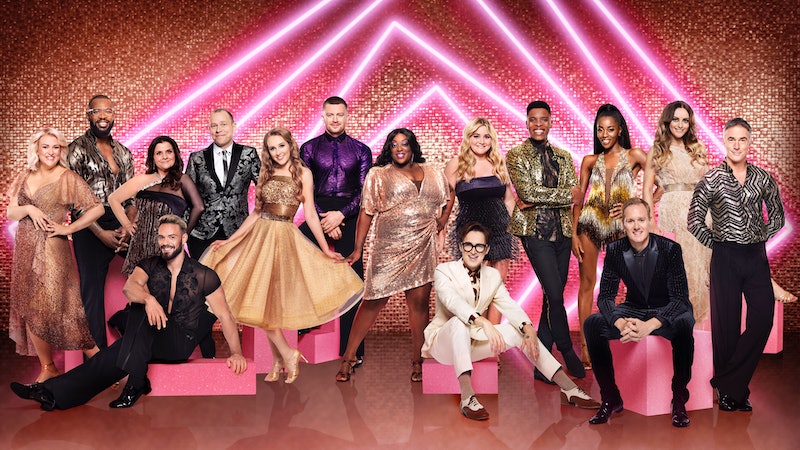 Autumn is just around the corner and, for fans of classic Saturday night telly, that means one thing: Strictly Come Dancing. And with Dan Walker’s seemingly accidental reveal of this year’s start date (September 18, btw), excitement around the series is reaching fever pitch. Add to that the glitzy official images? Cue frenzy.

Each year the discussion around which stars will join Strictly gets more and more outlandish. This year’s rumoured line-up included celebrities such as S Club’s Tina Barrett, footballing legend Rio Ferdinand, and Gogglebox’s Tom Malone. However, the most unlikely name on the list had to be Chris Whitty. After finding ‘fame’ during the pandemic, it was said that TV bosses were desperate to secure the government’s chief medical advisor.

Sadly, the Whitty rumour appears to have been just that – a rumour – but this year’s confirmed celebrities are a very exciting bunch, with a mix of soap actors, comedians, sports stars, and musicians.

There has been a change to the judging panel, too, with Anton Du Beke taking over from Bruno Tonioli for the whole series.

There’s a lot to look forward to with Strictly 2021. Keep reading to find out to full line-up of celebrities, what their feelings are about taking to the dance floor, and their Strictly makeovers.

Editorial note: This article is being continually updated to reflect the Strictly Come Dancing 2021 line up.

More like this
Twitter Has Renamed Ekin-Su After *That* 'Dancing On Ice' Performance
By Sophie McEvoy
Joey Essex Is Rumoured To Be Dating A 'Love Island' Favourite
By Sam Ramsden
David Schwimmer & Gemma Collins Join 'Celeb Bake Off' & Twitter Can't Cope
By Sam Ramsden
Vanessa Bauer Is Reportedly Dating Her 'Dancing On Ice' Partner
By Darshita Goyal
Get The Very Best Of Bustle/UK
Sign up for Bustle UK's twice-weekly newsletter, featuring the latest must-watch TV, moving personal stories, and expert advice on the hottest viral buys.

This article was originally published on April 16, 2021