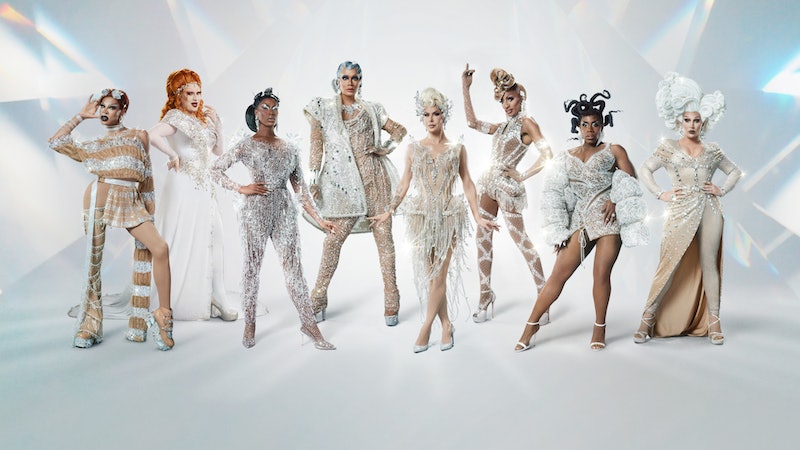 For years, superfans of RuPaul’s Drag Race have been discussing what an all-winners season would look like now that the franchise is in its 13th year. Who would agree to come back? What would be in it for them? Who could possibly come out on top among such tough competition? Well, the producers at World of Wonder have heard the fans and are now beginning to answer those questions. RuPaul’s Drag Race All Stars 7 is officially filmed and ready to air, and those who love the show will get to tune in and catch all the lewks, the reads, and the drama very soon.

Below, find out when and where to watch All Stars 7 as well as which eight former winners are back for another shot at glory (not to mention the prize money).

What Date Will All Stars 7 Premiere?

All Stars 7 will premiere on May 20. On that date, the first two episodes will air, breaking with precedent from past seasons. For those who can’t wait until then to catch a glimpse of the beauties competing in the all-winners season, teasers are available on the Drag Race social media platforms and YouTube channels, and a preview will air during the Season 14 finale on April 22.

Where Can You Watch All Stars 7?

All Stars 7 will be available only on Paramount+ starting May 20. A new season of RuPaul’s Drag Race All Stars: Untucked — the behind-the-scenes post-show — will also premiere on Paramount+ on the same day and continue throughout the season. A separate-but-connected miniseries called Countdown To All Stars 7: You’re A Winner Baby will begin airing on VH1 on April 29 at 8 p.m. ET. The four-episode program will air an episode once a week until All Stars 7 begins, and it will feature fan favorite queens from past seasons watching and commenting on the best moments from all of the eight girls competing in the all-winners season.

Are There Twists For All Stars 7?

For the first time ever, the queen who is crowned the champion will take home $200,000, instead of the normal $100,000 typically given to those who come out on top nowadays. How contestants will be sent home (or not) is yet to be revealed, though it’s rumored that this season may not have any immediate weekly eliminations until the finale. Instead of eliminations, the contestants may be judged on a scoring system or earn stars that will help them earn a spot in the finale. This will allow all of the contestants to showcase every look they brought with them.

Meet The Queens Of All Stars 7

Here are the eight queens competing to snatch the crown.

By the time All Stars 7 airs, it will have been two years since Jaida Essence Hall was crowned the champion of Season 12 …f rom her living room because of global lockdowns. She’s still a winner, baby, but she didn’t enjoy all the perks that usually come with the crown (such as immediate touring), so All Stars 7 may be her RuDemption.

Kooky and silly, Jinkx Monsoon was largely misunderstood during her season, at least by some of the other contestants. RuPaul and the judges loved what she presented, and she constantly managed to do what has been identified as perhaps the most important thing in Drag Race — make Mama Ru laugh. Her win was a while back, so she certainly has a lot to show the larger-than-ever audience.

Few queens who have strutted into the werk room have become as beloved as Monét X Change is, and there are surely millions of fans who are already rooting for her to secure another win. She was named Miss Congeniality in Season 10, and then she went on to tie Trinity the Tuck for the top title in All Stars 4. She and Tuck are up against one another again this time around, but chances are they won’t tie. Or will they?

At 47, Raja is the oldest queen competing on All Stars 7, and she won more than a decade ago. Still, she’s Drag Race royalty, but her run on the program was so long ago, chances are some don’t remember what she presented, or perhaps many haven’t even seen her early episodes at all. All fans surely know her from her annual Fashion Photo Ruview YouTube series, which sees her and another queen judge the looks from every episode.

Shea Couleé is the most recent winner of the winners to sign on for All Stars 7, as she was crowned the champion of All Stars 5 in July 2020. She is clearly still hungry for more, which isn’t surprising, given that she’s been known for her ambition ever since she first walked into the werk room. She talks the talk and walks the walk.

The Vivienne is the only non-U.S. queen to compete in All Stars 7. While Drag Race has certainly become an international brand, many of those who appeared in versions that aired around the world haven’t become celebrities like those qho have done well in U.S. showings. Win or lose, some viewers will meet The Vivienne for the first time, and it will surely help her career.

Trinity The Tuck and X Change are the only two queens who have had to share a winner’s title, and while it’s great that they both got to come out on top, they may be looking for some solo time in the spotlight. Funny and glamorous, look out for the Tuck.

Yvie Oddly is one of the weirdest queens (and that’s compliment) to ever compete on Drag Race, and it’s those oddities that made her so endearing and captivating to watch. During Season 11, she bent and twisted her way to the top, and she remains a standout champion in the lineage of winners. In her short confessional shown during the entrance looks, she licks her own nipple and showcases her signature cackle, so it seems like she’s back and in fine form.

More like this
Which RHODubai Housewife Has The Biggest Net Worth?
By Hugh McIntyre
The ‘Love, Victor’ Showrunner Gave Fans Hope For A Possible Spinoff
By Brad Witter
Harry Styles Helped A Fan Come Out As Gay In Dramatic Fashion At His London Show
By Jake Viswanath
Mel C, Courtney Act, & Rob Beckett Will Be Judges On ITV’s New Drag Show
By Sam Ramsden
Get Even More From Bustle — Sign Up For The Newsletter