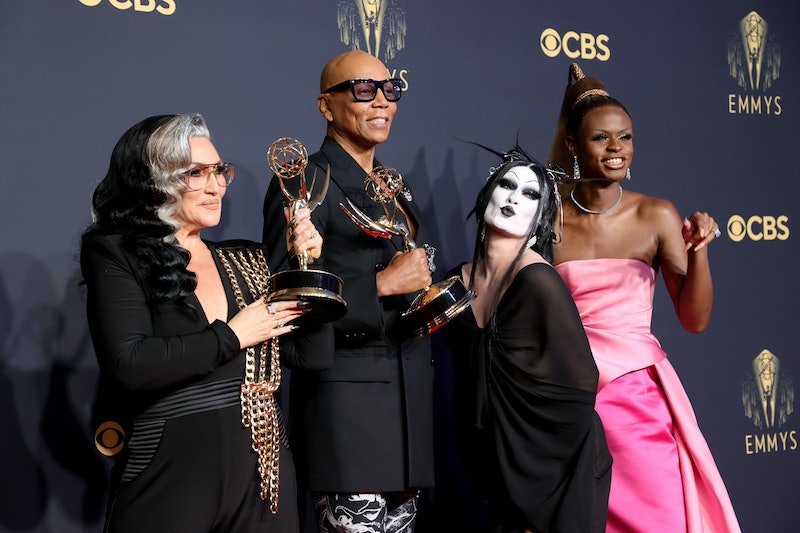 For decades, RuPaul owned the title of being the preeminent drag queen, and he even labeled himself as “the Supermodel of the World.” He definitely was a star in certain circles, but he struggled to find mainstream success and critical acclaim. Nowadays, he’s a bigger star than he’s ever been as the creator of the global RuPaul’s Drag Race franchise. He’s not only a household name with one of the most successful reality shows of all time to his credit, but he’s also quickly becoming an awards season favorite, one who wasted no time making history in the TV industry.

With three new trophies this Emmys season, RuPaul is now an 11-time Emmy winner off of 16 nominations, joining an exclusive club of double-digit winners. After winning Outstanding Competition Program for RuPaul’s Drag Race on Sept. 19, he’s now the most-awarded Black artist in Emmys history. With nine Emmy nominations in 2021, Drag Race was the most nominated reality program this year, with RuPaul earning three individual nods as an executive producer and host. At the Sept. 11 Creative Arts Emmy Awards, RuPaul also won for Outstanding Host for a Reality or Competition Program, beating out hosts from Shark Tank, Top Chef, Queer Eye, and Nailed It!

The 60-year-old entertainer has now won the Outstanding Host category six times in six consecutive years since 2016, the year he was first nominated. RuPaul has come to dominate this particular category like none before him. With this win, he furthers his lead over the previous record holder: Survivor’s Jeff Probst, who has come out on top four times.

Watching Drag Race, it is clear that RuPaul gives his all in each and every episode. He’s funny, sassy, hard on the queens when he needs to be, and he doles out more life advice and excellent lessons in one season than most hosts do in their entire careers. RuPaul’s ability to carry the reality program with his charisma, uniqueness, nerve, and talent is unparalleled. While viewers always pick their favorite contestants each time the program returns, Drag Race just wouldn’t be the same without its namesake founder, and the Emmys clearly agree.

RuPaul also nabbed another Emmy as the executive producer on RuPaul's Drag Race: Untucked, a post-show spinoff series that follows the contestants backstage as they talk about their struggles with the challenges and the drama among themselves. Untucked won Outstanding Unstructured Reality Program, triumphing for the first time with its fifth nomination.

Drag Race has won the Outstanding Competition Program Emmy for the past three years. Because Drag Race emerged as the champion again, the LGBTQ-focused show tied with The Voice for the second-most wins of all time, coming in behind only The Amazing Race, which is in a distant first place with an impressive 10 trophies. Overall, Drag Race has earned 48 Emmy nominations and won 23 times since 2016. This year at the Creative Arts Emmys, the show also won the Outstanding Casting, Outstanding Directing, and Outstanding Picture Editing categories.

More like this
Chrishell Stause & G Flip Have “No Rules Or Regulations” In Their Relationship
By Brad Witter
Which RHODubai Housewife Has The Biggest Net Worth?
By Hugh McIntyre
Tamra Judge & Vicki Gunvalson Gave A Hopeful “Tres Amigas” Update
By Brad Witter
RHOA’s Kenya Moore Said Her Friendship With Marlo Hampton Is “Too Far Gone”
By Brad Witter
Get Even More From Bustle — Sign Up For The Newsletter

This article was originally published on Sep. 17, 2021