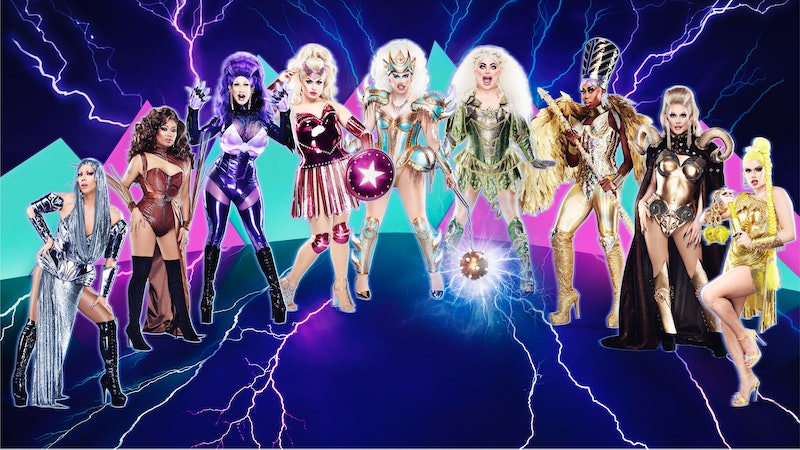 Start your engines Drag Race fans because Mother Ru is taking the groundbreaking competition show to the next level. Yes, RuPaul has unveiled yet another spin-off in the ever-expanding Drag Race franchise, and this time she will be opening up the competition to queens from all corners of the globe — with the UK serving as the host nation. Keen to learn more about RuPaul's Drag Race: UK Versus the World? You can find out everything you need to know below.

When Will RuPaul's Drag Race: UK Versus The World Air?

RuPaul's Drag Race: UK Versus the World will be sashaying onto our screens on February 1, 2022, on BBC Three and BBC iPlayer. The brand new series has been billed as the “centre-piece” of the launch of the rebooted BBC Three TV channel, which goes live across the country on the same day.

What’s The Premise Of RuPaul's Drag Race: UK Versus The World?

With RuPaul at the helm, RuPaul's Drag Race: UK Versus the World will become the first-ever international all-stars edition of the show and see nine renowned queens from different franchises around the globe unite to compete for the title of the first “Global Drag Race Superstar.”

As mentioned, the United Kingdom is serving as the competition’s host region, and RuPaul will be joined by veteran Drag Race panellist Michelle Visage, Graham Norton, and Alan Carr, as well as a string of superstar guest judges.

“Michelle Visage, Graham Norton, Alan Carr and a sparkling array of superstar guest judges will join RuPaul to help him decide… Who will be queen of the world and named the first Global Drag Race Superstar?! Let the battle commence,” a BBC synopsis of the forthcoming series reads.

Who’s In The Line-Up Of RuPaul's Drag Race: UK Versus The World?

The cast of RuPaul's Drag Race: UK Versus the World has finally been unveiled, and, as promised, will feature some of the most talented Drag Race queens from the United States, the UK, Canada, Holland, Thailand, and beyond.

Representing the UK are series one heavyweights Cheryl Hole, Blu Hydrangea, and Baga Chipz, each of whom will compete for the crown agaisnt the USA’s Mo Heart and Jujubee, Canadian queens Jimbo and Lemon, Holland’s Janey Jacké, and Thailand’s own Pangina Heals.

While waiting for the new show to air, get your Drag Race fix by reliving the greatest lip sync performances and the most dramatic reunion moments.

More like this
'Love Island' Has Added Yet Another Bombshell To The Villa
By Bustle UK
Joey Essex Is Rumoured To Be Dating A 'Love Island' Favourite
By Sam Ramsden
'The Traitors' Is Officially Being Turned Into A Board Game
By El Hunt
Twitter Has Renamed Ekin-Su After *That* 'Dancing On Ice' Performance
By Sophie McEvoy
Get The Very Best Of Bustle/UK
Sign up for Bustle UK's twice-weekly newsletter, featuring the latest must-watch TV, moving personal stories, and expert advice on the hottest viral buys.

This article was originally published on Dec. 21, 2021